Worth $30 Million Himself, Rock Guitarist Tom Morello Attacks the 'One Percent'

Tom Morello constructed a band dedicated to bashing capitalism, among other supposed “injustices.” But beware, Morello fans: this guitarist is, unsurprisingly, worth millions.

Tom Morello, lead guitarist of Prophets of Rage and Rage Against the Machine, takes to Twitter constantly – though not necessarily to discuss his music (given the band’s taste for screaming and ear-ringing metallica, maybe this isn’t such a bad thing). In light of his loud adherence to the Resistance, Morello has an unquenchable penchant for the political.

On June 16, 2017 Morello retweeted the following from RoseAnn DeMoro: 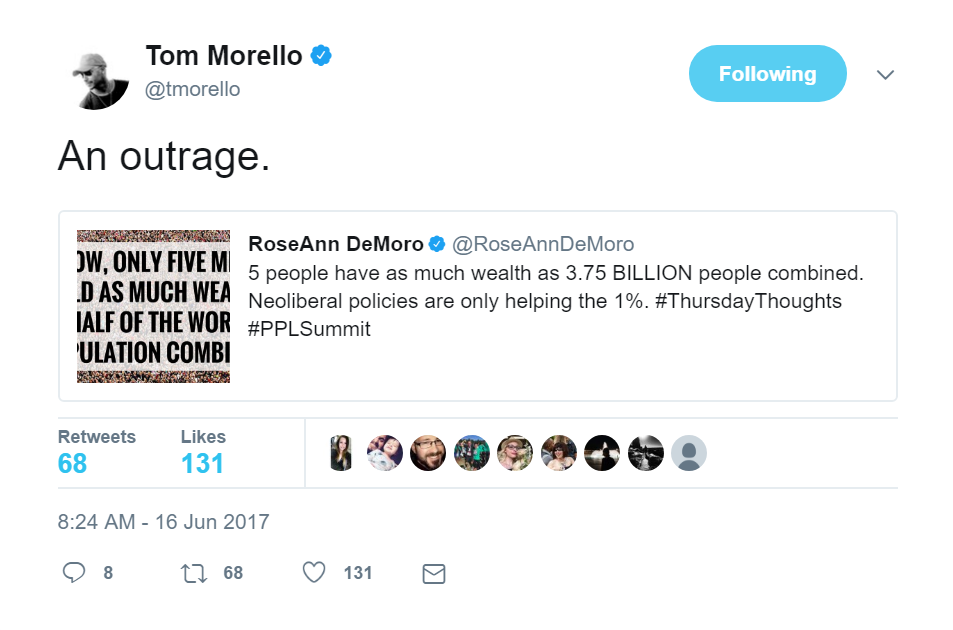 A Harvard grad who made it into Rolling Stone’s 100 Greatest Guitarists of all time, Morello is worth $30,000,000 – well above the world requisite for entrance into the top 1 percent.

Morello recently collaborated with documentarian Michael Moore on the band’s song ‘Unf— the World’ – an ode to unapologetic anti-Americanism and Morello’s own, self-professed anarchy.

In 2016, Prophets of Rage quickly attained No. 5 on Billboard’s Top Rock Albums chart, No. 2 on Hard Rock Albums, and No. 4 on alternative albums upon the release of their debut EP, The Party’s Over. The band’s success is notable, and a little ironic, as even the liberal HuffPost noted:

Even if the Prophets of Rage tour is based on capitalism, mixed messages, poorly targeted adversaries, a questionable (if not flat-out counterproductive) lineup, and an overall theme more iconic than substantive, at least the band is taking advantage of the current political climate, right? Wrong. Despite grabbing headlines that surely generated interest and online traffic — on the day before voters in seven states headed to the polls, no less — the band’s new web site makes no mention of any advocacy groups, provides no direction on how to register to vote, and in fact bears no political overtones whatsoever beyond hollow and trite platitudes like, “This historical moment demands a historical soundtrack.”

Morello would do well to remember that he is very much at home in the 1 percent – especially before attacking it.