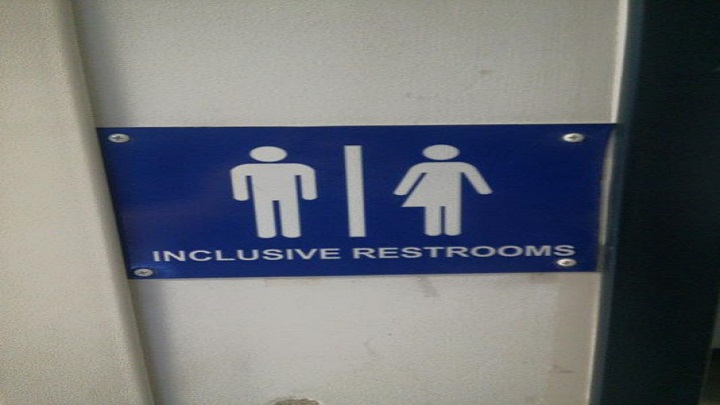 Tuesday night, Houston voters rejected a bill propped up by the city’s lesbian mayor Annise Parker that would allow transgender men and women into the public bathroom of their choice.

This came after voters in Springfield, MO revoked a similar ordinance passed by the city’s council a few months prior. But the backlash doesn’t stop there. In Fairfax County, VA, Hillsboro, MO and Chicago, IL, parents and students have angrily protested against similar “non-discrimination” rules in their schools, in just this year alone.

In other words, most Americans reject the notion that biological men have the right to enter women’s locker rooms and bathrooms. Shocker. But that doesn’t fit the media’s left-wing LGBT agenda, so journalists downplay the opposition to these bills or don’t report on them at all.

Case in point: Nov. 3, CNN reported that a Chicago-area school district would have its federal funding cut if it did not comply with an order from the Department of Education. Previously, a transgender student filed a lawsuit with the ACLU demanding permission to change and shower in the girls’ locker room. The school district already allowed transgender students their own private bathrooms, but that wasn’t good enough for the student or the ACLU. The DOE ruled that the school district had thirty days to comply or lose Title IX funding.

Where were the networks on this story? Only ABC's Good Morning America gave a brief soundbite on the story Nov. 4. NBC and CBS have yet to report on it.

The same thing happened Aug. 31 at a St. Louis-area high school that prompted a backlash from parents and students. After parents protested a new transgender-protection school rule at a school board meeting, about 150 students staged a walk-out the following week. What brought this on, again, was a single transgender student who complained and invited the federal government to force the school to make a special exception. 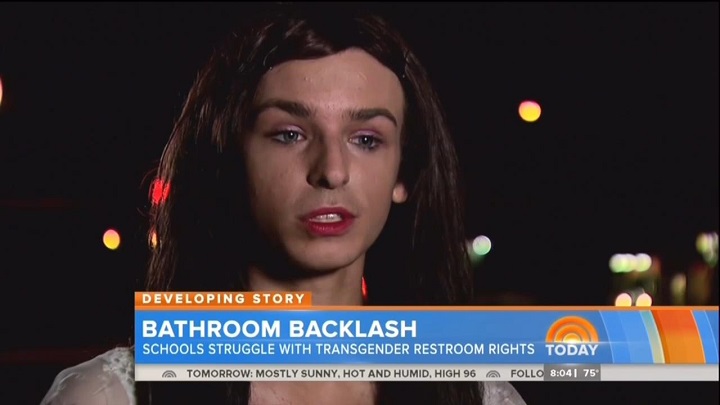 Biologically male senior Lila Perry had been using the women’s facilities since the beginning of the school year, causing students to complain to their parents and the school after being exposed to Perry’s male anatomy. The school had a private, gender-neutral bathroom and locker room, but that wasn’t enough for the student who demanded entrance into opposite-sex private changing areas.

One student tweeted out a picture of the protest with this statement:

The only broadcast to cover this story was NBC’s Today Show which covered the news later that week on Sept. 2. In the brief segment, anchor Natalie Morales didn’t mention that the school already provided a gender-neutral bathroom or that Perry had exposed himself to girls in the restroom.

Again, virtually the same thing happened in Troy, OH, at the beginning of the school year. A biological female filed a Title IX lawsuit to force her school to allow her access to the men’s restroom. The school was forced to comply or lose federal funding.

These stories are cropping up around the country, and still the networks don’t find them newsworthy.

Which brings us back to the first story of this year when there was a strong push against a proposed transgender rights measure. Under threat from the Department of Education, the Fairfax County, VA school district added “gender identity” to its class of protected students and teachers last May. Parents feared this would allow students and teachers who identified as the opposite gender to enter those locker rooms and bathrooms. Angry parents showed up at a school board meeting to protest the decision, but it passed anyway, under the threat of losing federal funding.

One board member explained to Fox News’ contributor Todd Starnes:

Yet this pervasive government overreach -- and its backlash -- isn’t being reported. Only ABC’s Good Morning America reported on the above story, simply saying that parents had protested a “gender identity” clause being added. CBS and NBC did not report on it at all.

It’s not like the media simply doesn’t care about transgender issues; in fact, they care a little too much, as evidenced by the months they spent covering Bruce Jenner’s transition to “Caitlyn,” and the numerous segments on transgender kids (NBC Nightly News April 21 and 22, ABC’s The View July 8, ABC’s Nightline July 14, ABC’s Good Morning America Oct. 16, ABC’s Nightline Oct. 16, and on NBC’s Today July 24).

Perhaps it’s because the story doesn’t shed the LGBT cause in the best light. Complaining until you get what you want isn’t an admirable tactic. The only time the networks seemed to report on transgender stories is when there was popular support.

For example, on July 2 NBC’s Today, an entire segment was devoted to putting a Girls Scouts chapter in the limelight for returning a donation which came with the stipulation that it couldn’t be used on transgender Girl Scouts (i.e. biological boys).

NBC reporter Joe Fryer set up the interview with the Girls Scouts of Washington’s CEO as if he were talking to a martyr:

“There was not a moment of hesitation for you?” he asked, sympathetically.

As these stories become more and more common, can we expect the mainstream media to give a balanced report showcasing both sides? If history is any indicator, probably not.