In a list that included Pope Francis and tech billionaires, two Ferguson protesters were lauded as among the 50 “greatest leaders,” by Fortune magazine. Fortune described the people who made the list as “extraordinary men and women” who are “transforming business, government, philanthropy, and so much more.”

If by transforming businesses, Fortune means looting and burning them, no argument here. Deray McKesson and Johnetta Elzie helped whip up the Ferguson mobs that terrorized the city in service of a lie. Not that Fortune would tell readers that:

“After the fatal shooting of Michael Brown by police in Ferguson, Mo., Mckesson left his school administrator job in Minneapolis to protest in St. Louis. He met Elzie at a medic training on how to respond to tear gas, and together they began to chronicle events in the shooting’s wake as they unfolded with breakneck speed. Their award-winning online newsletter, This Is the Movement, now has some 15,000 subscribers—and the two reach another 100,000 followers via Twitter. “My role here is just to amplify the message,” Mckesson tells Fortune. “We are two of many people.”

Fortune was careful to note that McKesson and Elzie were “prominent voices for nonviolent protest.” That must be comforting to the burned-out shop owners and the families of cops shot during protests. It must salve the wounds of the survivors of the two NYPD officers murdered by a man who posted on Instagram: “I’m putting wings on pigs today. They take 1 of ours ... let’s take 2 of theirs.”

All of that happened because activists and their media tools chanted “Hands Up Don’t Shoot” as they perpetuated the lie that Ferguson Officer Darren Wilson murdered a surrendering “gentle giant.” lie.

Elzie tweeted out this charming acknowledgement of the win: 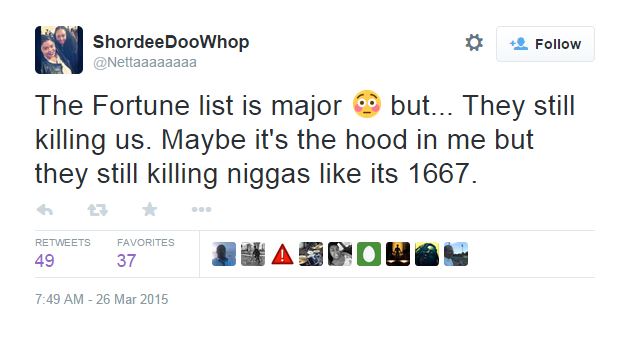 Also, it’s worth noting that Fortune is a sister magazine to TIME.  In December, TIME almost chose Ferguson protesters as theIr annual “person of the year.” Instead, Ebola caregivers won that distinction. That made Ferguson protesters angry. Perhaps Time Inc. was trying to makeup for that “snub”?