Nurses Testify on Being Forced to Do Abortions: ‘I Still Have Nightmares’

While many in the liberal media herald abortion as “women’s rights,” they censor how abortion endangers women’s rights in the medical profession -- women who are forced to either help perform abortion or risk losing their jobs.

On Wednesday, pro-life leaders and lawmakers attended a Capitol Hill press conference in support of the Conscience Protection Act of 2017. The bill protects the conscience of those in federally-funded healthcare systems who object to performing or participating in abortion. Nurses, whom the legislation would affect, testified at the event. Video Below.

Sponsored by Rep. Diane Black (R-TN), the bill would would allow healthcare professionals to pursue legal action if they’re discriminated against for refusing to perform abortion and “provide legal recourse for hospitals, health systems, religious charities, churches and insurance companies who are required to participate in or provide coverage for abortion,” The Hill reported Wednesday.

At the event, three nurses shared personal testimonies in support of the bill: Cathy DeCarlo, a New York nurse forced to help with abortion, Sandra Mendoza, an Illinois nurse who lost her job because she wouldn’t aid in abortion and Fe Vinoya, a New Jersey nurse who risked her job for refusing assist with abortion.

Of the three nurses, DeCarlo spoke first. She began her nursing career in the Philippines to follow her “passion for helping patients” and to serve God.

“My faith in God and the Catholic Church’s teaching about the sanctity of all human life further inspired my career in nursing as it encouraged me to serve all those who are sick with gentleness and respect,” she added. “My faith also informed my conscience to never harm or intentionally take the life of an innocent person.”

After working in the Philippines, she moved to New York in 2001 for new opportunities to grow her career. Three years later, she began working at a New York hospital that “assured” her she would “never have to compromise my conscience and participate in an abortion.”

“I was preparing for what I thought was going to be a common procedure following a miscarriage,” she said, tearing up, “only to realize that I was being asked to perform an abortion on a live 22-week-old unborn baby.”

When she asked for a substitute to take her place for the abortion, her supervisor refused.

Instead, her supervisor warned her that “if I didn’t assist, I would be charged with insubordination and abandoning my patient.” DeCarlo added, “My nursing career and ability to care for patients and provide for my family would be over.” 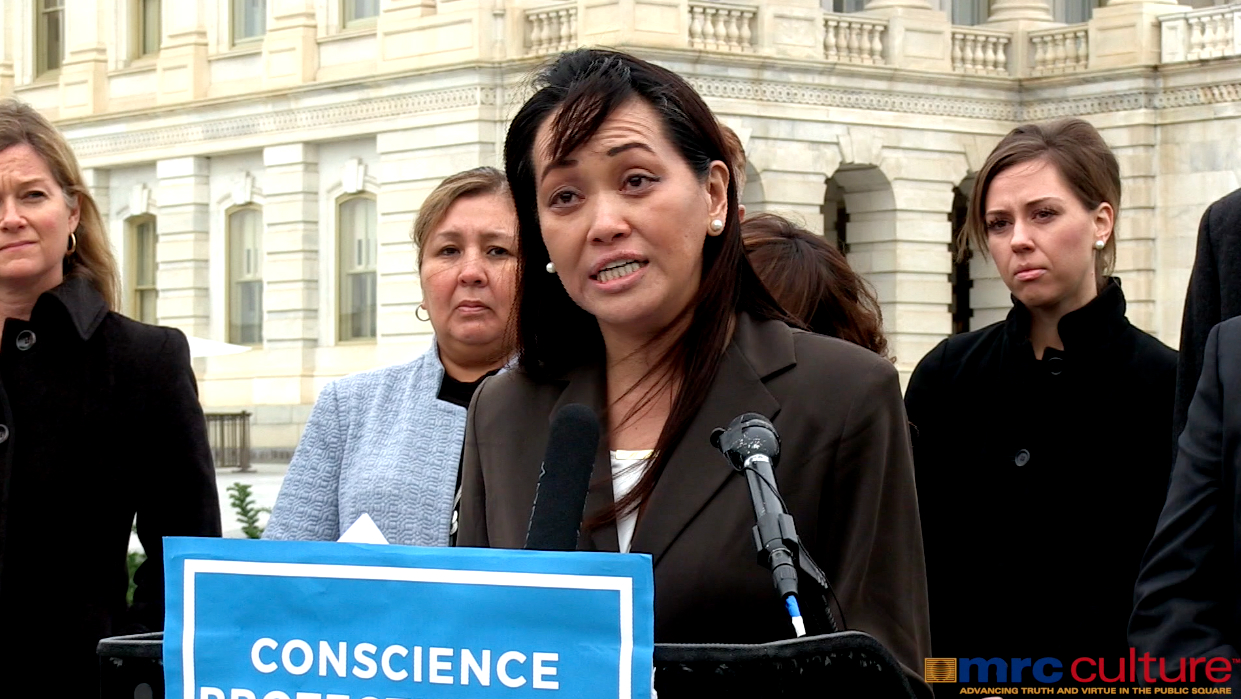 The memory still haunts her.

“I’ll never forget that day as I watched in horror as the doctor dismembered and removed the baby’s bloody limbs, and I had to account for all the pieces,” she confessed. “I still have nightmares about that day.”

Because of that experience, DeCarlo called on Congress to pass the Conscience Protection Act “so that no other nurses or healthcare professionals are ever forced to go through what I did.”

In addition to DeCarlo, Mendoza and Vinoya also cited their religious convictions against abortion.

An award-winning nurse, Mendoza stressed that she lost her job in 2015 at the Winnebago County Health Department because of her “religious convictions that prevent me from taking a person’s life,” including through abortion.

“I’m called to protect life, not destroy it,” she said, citing the Hippocratic Oath. “While we may not all agree on abortion, I’d hope we can all agree that no doctor or nurse should be forced out of employment on account of their faith and commitment to protecting life.”

“If Congress passes the Conscience Protection Act,” she added, “I would have legal recourse to pursue justice in my case to ensure that hospitals receiving federal dollars do not discriminate against or force to lose their jobs healthcare professionals like me who seek to protect all innocent life.”

Like Mendoza, Vinoya urged that “participating in the destruction of human life is not only a violation of my religious convictions, it also conflicts with my calling as a medical professional to protect life.”

“I was asked to choose between following my conscience or keeping my job to sustain my family -- a choice no American should ever have to face,” she urged.

While her state, New Jersey, and federal law “prohibited discrimination against” her and 12 nurses who refused to perform abortion, she warned, in a written statement provided after her speech, that “in practice those laws are only as effective as the willingness of government officials willing to enforce them.”

The Conscience Protection Act, her statement concluded, “clarifies existing protectons and provides a private right of action so that healthcare professionals like me do not have to rely upon which ever administration is in power to enforce law.”