It’s a rare day when both Fox News and NBC News positively cover the story of a courageous young Christian woman who refused abortion. But that’s exactly what just happened. 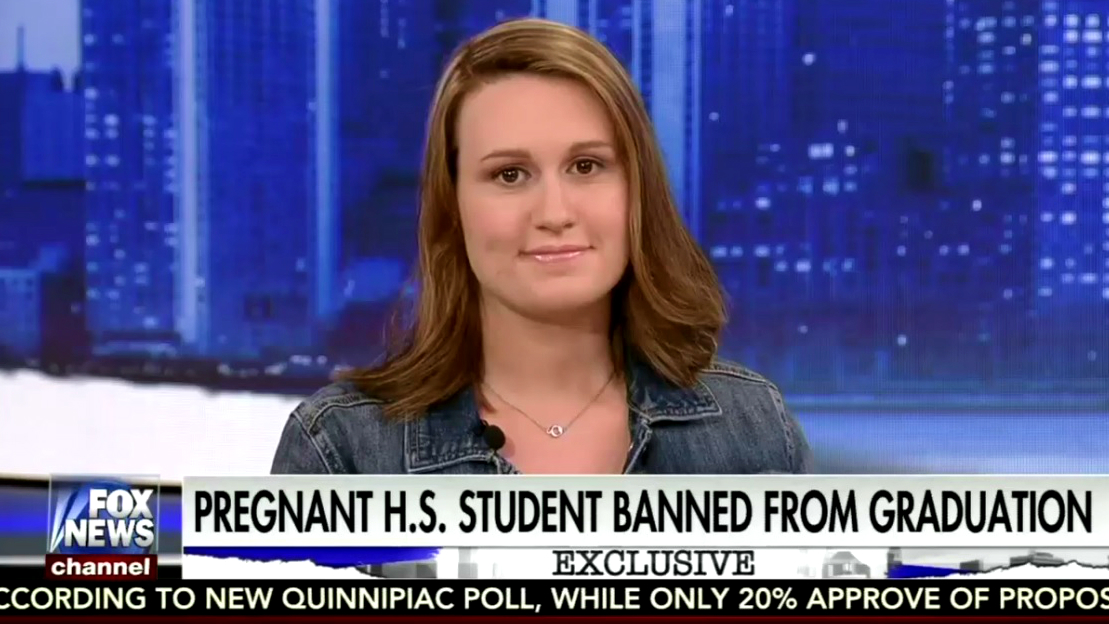 Fox News, on Thursday night, and NBC News, on Friday morning, reported on the viral story of high-school senior Maddi Runkles. Although Runkles boasts a 4.0 average and even served as student council president, she was banned from “walking” at graduation by Heritage Academy, a private Christian school in Maryland. That’s because, in January, Runkles discovered she was pregnant.

While media speculation, personal attacks and nasty social media commentary are swirling around her story, some reports, such as from Fox, are helping to dispel the misinformation.

Runkles has already been disciplined: she served a temporary suspension, left her leadership positions in the school and confessed publicly to all of her classmates and their parents. She admits that breaking the Christian school’s code – which prohibits premarital sex – was wrong. But she argues that students who have also broken other parts of the pledge have been allowed to attend the graduation ceremony.

“I agree I had to be disciplined. I broke the rules, I had no problem with that. I accepted my consequences,” she told Fox. “But I never thought that my consequences would be drug out. No kid has ever had consequences drug out like this.” Video below.

Fox News anchor Martha MacCallum provided an exclusive on the “story getting a lot of attention around the country” during The Story. “Maddi thinks she's being punished because her mistake is visible,” MacCallum said of the “brave young woman.”

MacCallum interviewed both the 18-year-old and Kristan Hawkins, president of Students for Life, the group Runkles’ family turned to for help. In April, Runkles first publicly shared her story at a Students for Life rally held in Washington, D.C. The Fox segment included exclusive MRC footage of her speech.

Because she was “so scared,” Runkles “definitely” considered abortion. But, she said, “I knew it was wrong. I knew I shouldn’t be thinking that, but I have seen the way girls like me had been treated and I didn't want to be that girl.”

And that’s why she’s speaking out now: for girls like her.

By Maddi’s side, Hawkins stressed that “this is a national conversation that’s needed to happen a long time ago.” 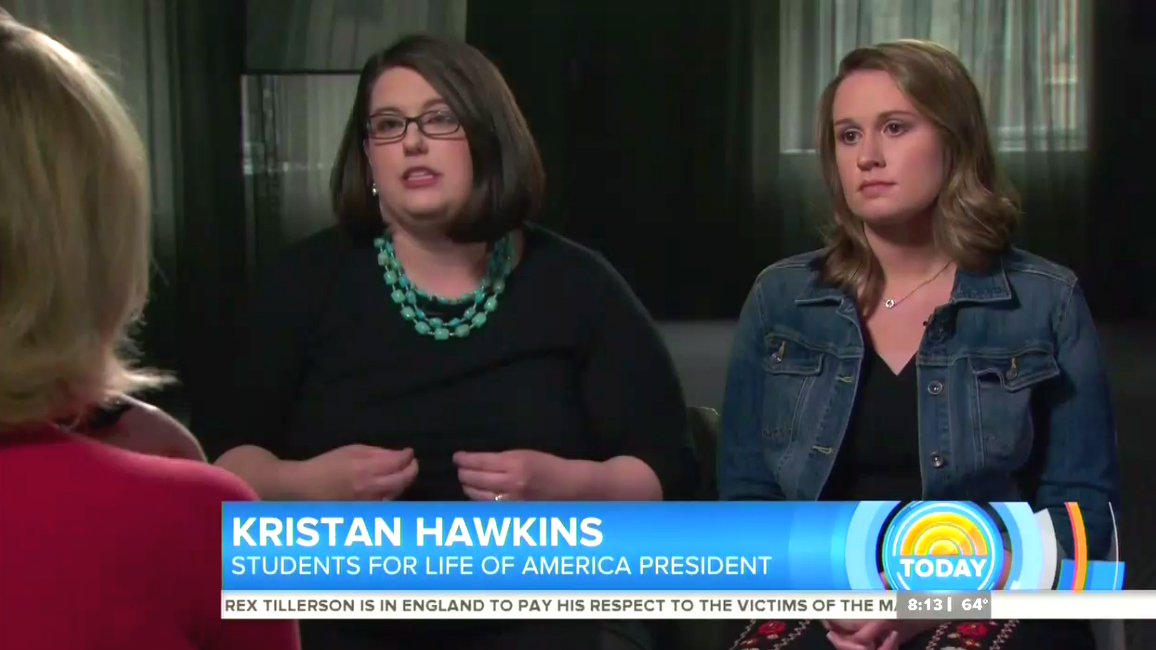 “What about grace?” she asked, “What example have you shown to every student in this school? What they have done has told every girl in that school it's better just to have an abortion and cover this up.”

The next morning, during Today, NBC co-anchor Savannah Guthrie also introduced the “story stirring a lot of controversy” before turning to correspondent Kristen Dahlgren.

Like MacCallum, Dahlgren also interviewed both Runkles and Hawkins. She also cited a statement from Runkles' principal, Dave Hobbs, to NBC News, claiming the school was "being bullied."

“Please tell America that we are not disciplining Maddi because she chose to keep her baby boy,” Hobbs stressed. “For that, we commend her.”

But Runkles had a different take. “It's hard not to think of them as hypocrites,” she urged to Dahlgren. “Because they promote life so much, but then, when you make the right choice and choose life, they don't want anything to do with you.” Video below.

NBC isn’t the only broadcast network to interview Runkles. On May 24, she appeared on CBS This Morning. Correspondent Jan Crawford revealed Runkles is expecting a baby boy in September and plans to “name him Greyson as a nod to God's grace and forgiveness.”

But Runkles first attracted national attention Saturday when The New York Times covered her story, with the headline reading, “Pregnant at 18. Hailed by Abortion Foes. Punished by Christian School.”

On Tuesday, her principal released a statement on behalf of the school. Among other things, Hobbs argued that “Maddi is being disciplined, not because she’s pregnant, but because she was immoral.”

Disciplining Maddi is not the issue … [M]y primary and continued complaint is that the disciplinary actions of the administration has extended far beyond accountability for the broken pledge regarding premarital sex. That accountability was served justly and humbly in Maddi’s confession, her suspension, and her removal from leadership positions …

By banning her and her alone, the administration and board collectively decided to make a public example of one student and has either intentionally or unintentionally communicated to the school community that pregnancy (not simply premarital sex) is a shame and should not be observed within our school community.

Other pro-life conservative commentators have chimed in to defend Runkles against her school and amidst a barrage of attacks (social media and otherwise) on the teenager. 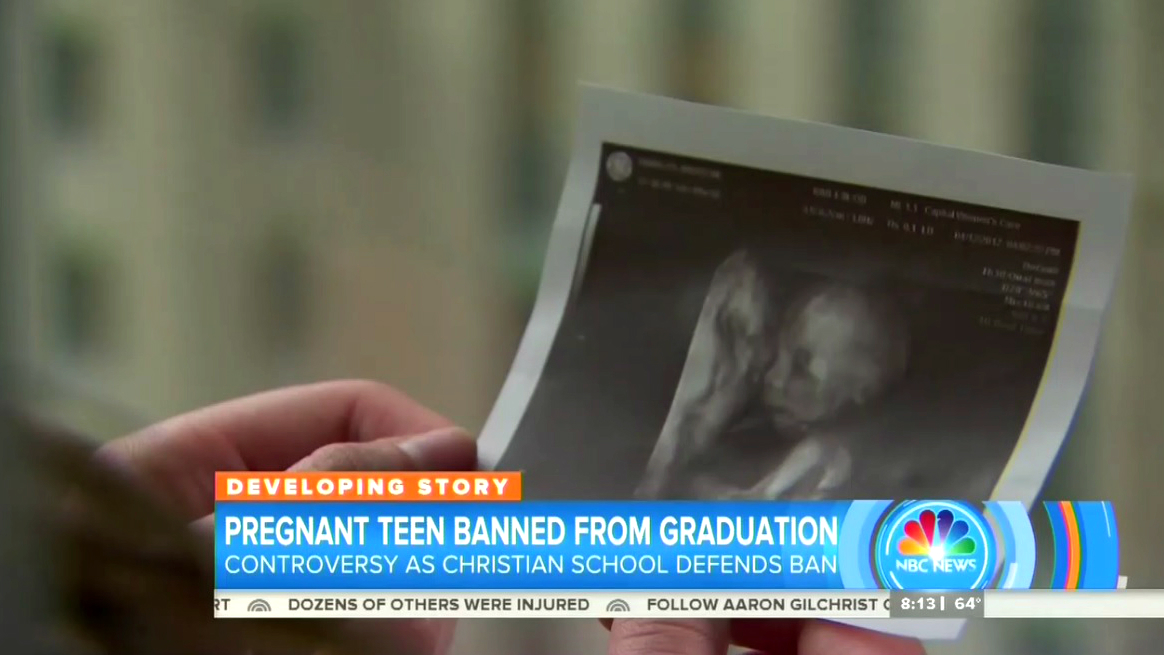 “Forcing Runkles to stand in front of the whole school to discuss her sins is just one embroidery short of The Scarlet Letter, and quite arguably abusive,” Ed Morrissey, the senior editor of Hot Air, argued. “Keeping Runkles from the final and most important ceremonial event of her time at Heritage Academy seems nothing short of vindictive after having piled on punishment after punishment already.”