The Real O’Neals debuts Wednesday before regularly showing on Tuesdays, beginning March 8. Loosely based on the childhood of gay activist and anti-Christian bigot Dan Savage, the ABC sitcom centers around a “perfect” Catholic family – where the parents want a divorce and their middle child, Kenny, comes out as gay.

“In the beginning, the perfect Irish Catholic family was created,” a voiceover reads in the trailer. “And then, all hell broke loose.”

The extended promo gave a bigger glimpse into how the show pokes fun at Catholics:

When ABC ordered the pilot for The Real O’Neals in 2015, the Media Research Center hosted a protest along with other conservative and religious organizations. And, as it turns out, they weren’t alone in condemning the show. Their unlikely ally? TV critics.

“There is nothing ‘real’ about ‘The Real O’Neals,’” began New York Post writer Robert Rorke in his review of the show. “Or anything funny.”

He went so far as to call the show a “witless collection of offensive anti-Catholic cliches.”

“If you didn’t understand that this series was about Hollywood’s idea of Irish Catholics, you can rely on ‘The Real O’Neals’ to remind you,” he warned.

Rorke pointed to how the first Jesus joke came one minute into the show, the mother created pancakes in the shape of Jesus’ face and a Virgin Mary statue stands above the O’Neals’ toilet bowl.

He commented, “One wonders how network programmers would react if the offensive jokes heard here were used against another religious group.”

“But Catholics are fair game,” he concluded. “That’s the message of ‘The Real O’Neals.’” 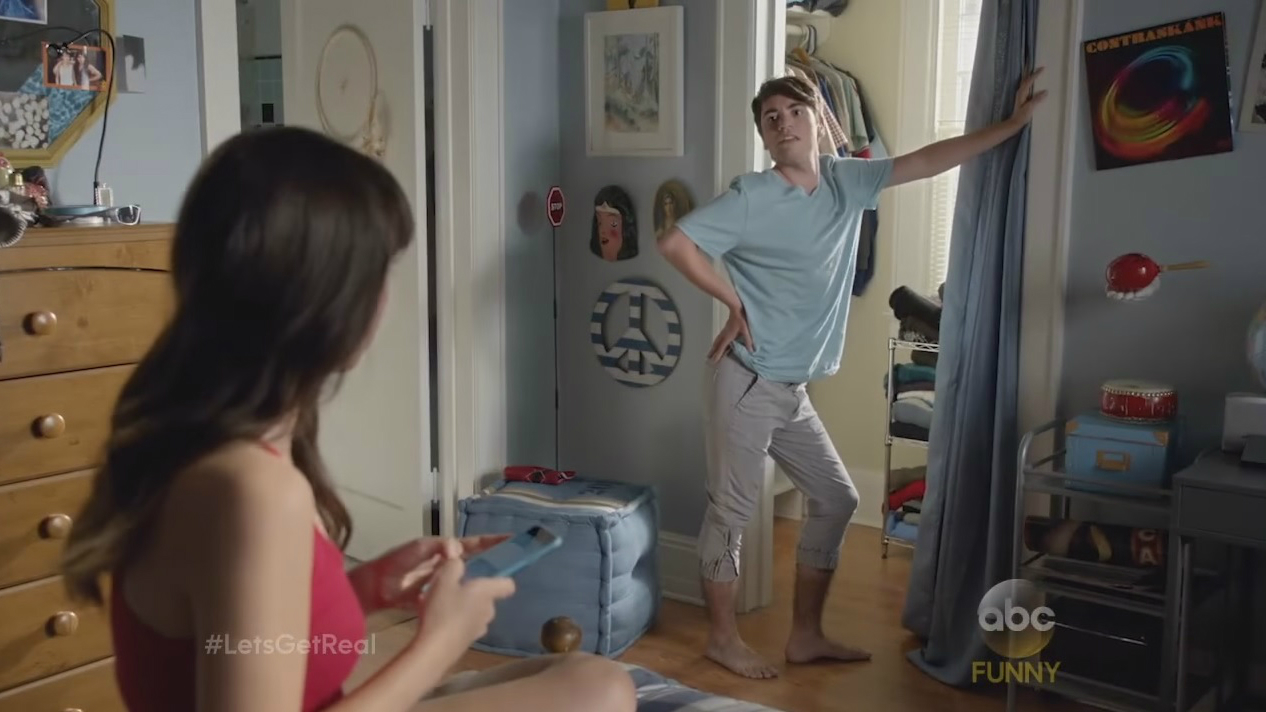 “There are some funny moments,” admitted USA Today TV critic Robert Bianco, “and the performances are strong enough to give one hope that those moments might eventually become more frequent, and tied to a stronger show.”

“But for now,” he added, “O’Neals is hitting a few too many false notes, and hitting them far too strongly.” He concluded with the pun, “And that’s a real problem.”

Variety Chief TV Critic Brian Lowry wrote that the plot of the show “doesn’t feel as novel as it once might have.”

He called success for the show a “long shot” – but not because it crossed a line.

Instead, according to Lowry, the show “doesn’t appear any edgier” than ABC’s gay-friendly Modern Family, a factor he credited to the “edge-blunting nature of ABC’s development process.” He even recognized “something inherently conservative” in the show: the “underlying notion of parents and kids loving each other, whatever the complications and differences.”

Deadline reporter Dominic Patten similarly commented on the show, which he described as a “trying-too-hard-to-be-quirky series” turned “bland.”

“The truth is that on the road to its premiere, most of what could have offended anyone about The Real O’Neals was long since exorcised,” he wrote. “Except if you are offended by a wasted opportunity — because that’s what The Real O’Neals is in this TV era or any other for that matter.”

“It doesn't start smoothly, but as we always say, comedies often require extra time to find their footing…” he wrote.

“The early installments suffer from a surplus of voices, a surfeit of refined characters and clumsy plot mechanics,” he explained, “but the third and particularly the fourth episode, titled ‘The Real F Word,’ speak to a show that's finding its perspective and beginning to properly utilize what is a very good cast.” 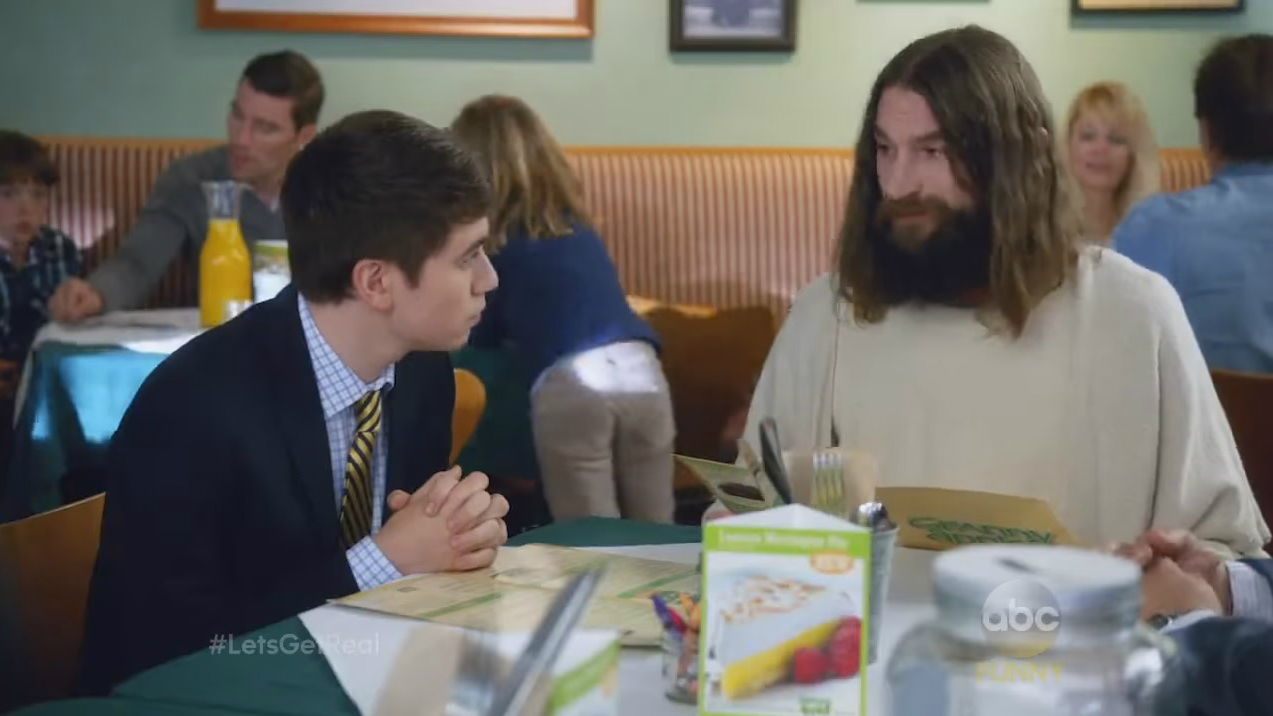 He also addressed Jesus as a character in the show.

“Jesus' conversations with Kenny are such an underdeveloped part of The Real O'Neals that if you don't like them, you should probably just be quiet and see if they vanish on their own, because the series would be unchanged in their absence," he advised.

In the minority by far, the couple positive reviews of the show came from TV Line (with a B+ rating) and liberal Slate (surprise, surprise).

“[W]ith quick and clever references,” wrote TV Line editor Michael Slezak, “the show also manages to be completely of the moment — and damn funny, too.”

Although the publication admitted, “we’re lighting a candle that The Real O’Neals doesn’t wind up in ratings purgatory."

For Slate, culture critic June Thomas gushed how, before the season ends, Kenny will “have his first gay kiss and go to prom with a boy.”

“It’s ridiculous that this should seem so revolutionary,” she wrote at the end. “But it does.” 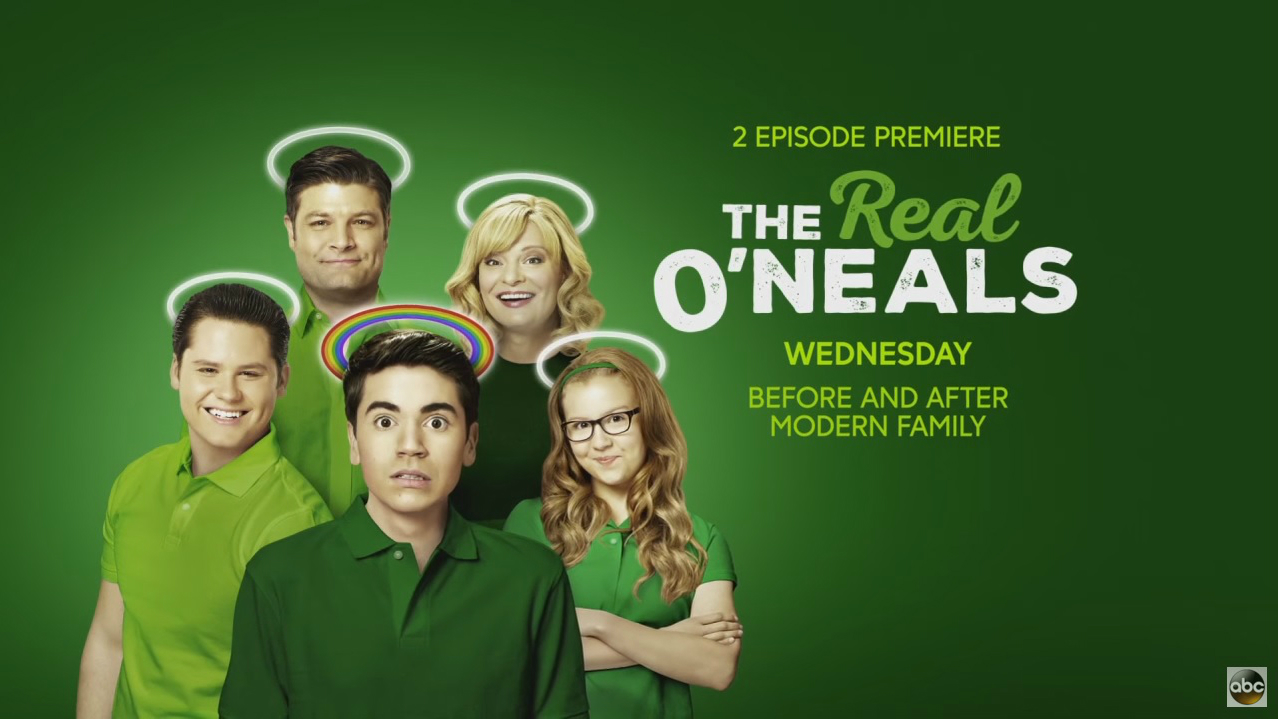 Besides influencing the plotline, Dan Savage serves as one of the many executive producers of the show that stars actors Martha Plimpton, Jay R. Ferguson, Noah Galvin, Matt Shively, Bebe Wood and Mary Hollis Inboden.

Savage’s comments only make the media love him more. But, this time, it seems they aren’t covering for him.