News outlets rushed to cover recent charges out of Houston against the Center for Medical Progress. But will they cover the Center’s latest video? Doubtful.

On Monday, the Center for Medical Progress (CMP) released a new undercover video in an effort to further expose the abortion industry’s role in harvesting aborted baby parts. The video captured National Abortion Federation (NAF) representatives calling money for tissue a “win-win” and expressed relief that CMP could rid them of aborted baby leftovers after trouble with other “disposal services.”

According to CMP, NAF, a group of professional abortion providers, boasts “approximately 50% Planned Parenthood membership.” Furthermore, both Planned Parenthood and StemExpress, said CMP, identified NAF as a “significant partner in the illicit sale of fetal tissue and organs.”

Monday’s video came just days after a judge ordered a preliminary injunction against CMP at NAF’s request. According to CMP, NAF is still “seeking to permanently enjoin” CMP “from releasing any footage” from its annual meetings in 2014 and 2015.

Sandy Fulkerson, a NAF training and education coordinator, was unfamiliar with such research, but declared she was “really fascinated” by the topic.

Another, woman (presumably another CMP actor introduced as “Brianna”) explained how fetal stem cells are used to “grow like a nervous system or an immune system in – a human one – in a rat.”

Fulkerson tried to imagine what that meant.

“I’ve seen like the rats with an ear on the – like the – growing the new tissue, but like an ear on their back and they can just shave it off, pop it on, right?” she laughed. “Obviously not that simplistic but…”

After receiving a more thorough explanation, Fulkerson called the research “amazing” and double-checked, “[S]o the idea is that if someone has a termination, they can donate the fetal tissue to this research?”

The first CMP actor responded by saying she wanted to meet medical directors of clinics to “just let them know about the business.”

She followed up by inviting the undercover CMP actors to a NAF conference to offer their services there.

“We have a group purchasing program through our membership,” she said, and “we have disposal, like bio-disposal companies, that work with us so it seems like this would be a really great option to be able to offer our members as well.” 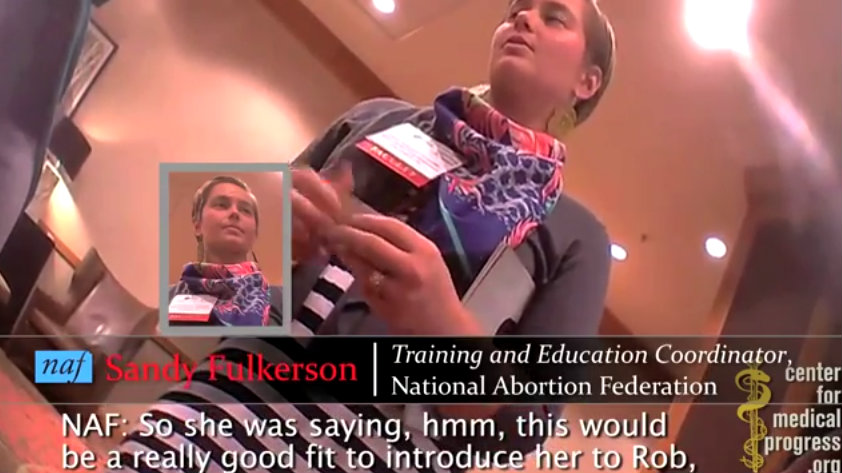 The main CMP actor highlighted how clinics could profit from working with them through BioMax.

“We do donate the fees that we get from our researchers, we give back to – a portion – give back to clinics as just a ‘thank you’ for letting us come in,” she said.

Fulkerson responded that the prospect “definitely sounds like something that some of our members would be really interested in.”

She went on to say there would be a special interest because abortion clinics run into problems trying to rid themselves of aborted baby leftovers:

[T]here’s been a lot of – of problems with finding disposal services that will work with them because again because of the stigmatization. So some of like the big names in the industry won’t touch them because of what they do. And it’s like, please, whatever, like, you’re picking up disposal services for the exact same thing at the hospital down the street for miscarriage management or for elective termination, but because it’s a free-standing abortion clinic, they’re – they’re being discriminated against and stigmatizing.

“It’s one of those absurd, trickle-down vendor issues,” she added, noting that abortion providers can even have “stupid little vendor relationships” with phone companies that veer away from serving them.

Fulkerson next introduced the CMP actors to NAF director of training and education, Jennifer Hart.

Again, Fulkerson stressed to Hart that BioMax would be a “good fit” because independent clinics have “issues” with “tissue disposal.”

The CMP actor reiterated for Hart: “the fees that we charge – a portion of that – we give back to the clinics.”

Hart called the situation “a win-win.”

Fulkerson went so far as to suggest that (abortion) “recovery rooms” have signs in them reading “‘Did you know? All of our, like, you know, all of our tissue remains are donated to science or are – you know, are used in research.”

“If I was a patient I would love to see it,” she concluded. “Like, wow, that’s really cool.”

CMP Project Lead David Daleiden released the following statement along with the video:

From the very first moment the National Abortion Federation met purported baby parts traffickers in our investigative journalism study, NAF was eager for them to attend its meetings and pay its member clinics for fetal body parts.

Multiple Planned Parenthood executives and the leadership of StemExpress told our investigators many times that NAF was a key partner for fetal tissue harvesting. The fact is, the National Abortion Federation is a key accomplice in Planned Parenthood and StemExpress’ scheme to profit off baby body parts, and for this reason they are desperate to suppress the freedom of the citizen press and cover up the evidence of their illicit dealings.

Last week, Daleiden presented himself to the Harris County court in Houston, after a grand jury indictment on two charges: Tampering with a Government Record and the Prohibition of the Purchase and Sale of Human Organs.

"I'm very grateful for all the support from the public, especially from the people of Houston,” he said at a Houston press conference. “We're out here to send a strong message that Houston's children and their body parts are not for sale by Planned Parenthood."

Daleiden’s next hearing in the Texas case is scheduled for March 28.