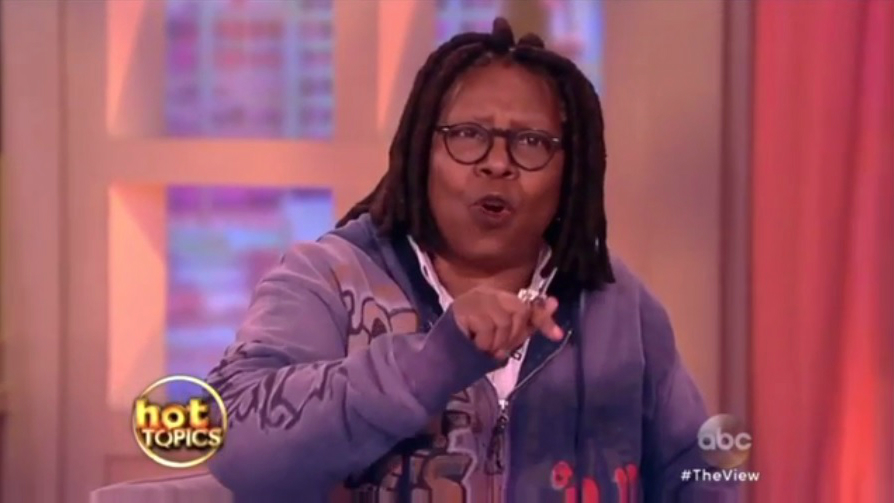 “How do I loathe thee? Let me count the ways.” That’s what The View ladies seemed to be telling Ben Carson during their show Monday.

Over the weekend, GOP presidential candidate Ben Carson spoke out against abortion and Roe v. Wade during Meet the Press. In response, The View crew deemed Carson “despicable,” “pathetic,” “completely off”—and the list went on. To make matters worse, Whoopi Goldberg declared at the end of their smear-fest that The View was “always fair and balanced.”

Whoopi first highlighted how Carson “came out strong against abortion” when he spoke with Chuck Todd from Meet the Press.

She played the following snippets from his weekend interview:

TODD: “Do you want to see Roe v. Wade overturned?”

CARSON: “Ultimately, I would love to see it overturned.”

TODD: “And that means all abortions illegal, or is there still an exception that you would have?”

CARSON: “I'm a reasonable person and if people can come up with a reasonable explanation of why they would like to kill a baby, I'll listen.”

CARSON: “Rape and incest, I would not be in favor of killing a baby because the baby came about in that way.”

To cheers and applause, Whoopi bashed Carson in a longer rant.

“[D]uring slavery, a lot of the slave owners thought that they had the right to do whatever they wanted to that slave, anything that they chose to do. And what if the abolitionists had said: 'You know, I don't believe in slavery. I think it's wrong, but you guys do whatever you want to do'? Where would we be?"

But the guilty one was really Carson, according to Raven-Symone, as he was the one “doing the exact the same thing that the slave owners did” by cutting off choices.

Collins gleefully chimed in that Carson’s abortion comments proved that “the guy is just completely off.” “I'm almost glad he says it,” she insisted, “because it kind of negates everything else that he has to say.”

Raven-Symone also accused Carson of “not taking into consideration of the emotional standpoint of the woman.”

Behar brought up how Carson has used slavery in comparisons to other topics, including Obamacare, which led her to call him “ridiculous” and full of “hyperbole.”

Again, Whoopi went into a rant – this time, a longer one.

“I don't mind that you feel this is a bad thing. I understand that,” she began. “But don't you dare tell women who don't have the choice that many women with money have, because that's who we're talking about really … You talk about poor women, honey.”

The bashing didn’t stop there. Behar and Collins also poked fun at Carson for refusing to go on SNL.

Collins added, “Can you imagine him on SNL? I mean, good night, Mommy, okay? Put a sleeping hat on. Because that is so snoozy,” she said.

Behar agreed. "SNL is live and this guy is a hologram, okay?”

But Whoopi said that, deep down, she liked Carson. She admitted he’s a “marvelous surgeon” and that she “read his book.” She just didn’t agree with him on abortion.

A lone voice, Paula Faris pressed at the end of the discussion, “We've also got to respect that not everybody in America believes the same way this panel does.”

“I'm just saying we're not reflecting both sides of the story and regardless of our opinions about it,” Faris reiterated, “I'm just saying that there are a lot of people here, I would imagine, that are pro-life.”

In the past, The View has repeatedly touted its own pro-abortion views, from attacking Kelsey Grammer’s prolife T-shirt to calling the attention given to the Planned Parenthood videos instead of Cecil the Lion, a “disgrace” to the death of the famed African lion.