Sen. Mike Lee is using the Senate floor to tell the story the media refuse to: Planned Parenthood’s harvesting of aborted baby parts. 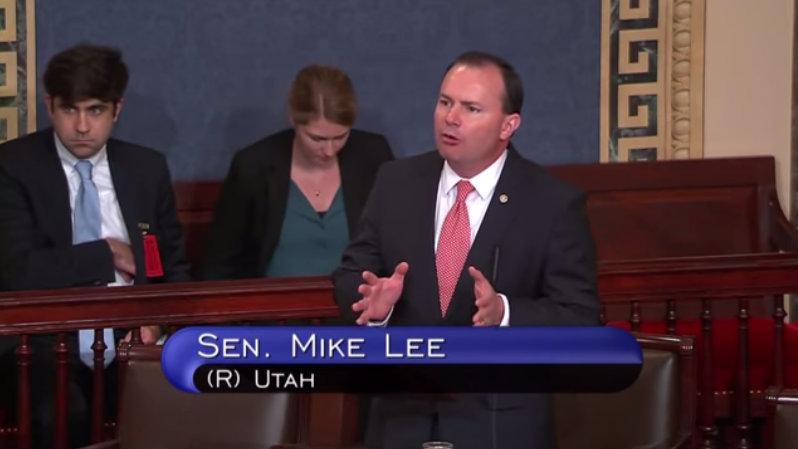 Speaking on the Senate floor Wednesday night, Senator Mike Lee (R-UT) slammed the “pro-abortion news media” as they “suppress” the videos exposing Planned Parenthood. Referencing an MRC Culture story, Sen. Lee argued that the network news shows “have gone dark” in their coverage of the videos released by the Center for Medical Progress (CMP).

In the middle of his speech, Sen. Lee highlighted the broadcast network coverage of the Planned Parenthood videos.

“[I]f you open a newspaper, click on the legacy media sites, and turn on the news … nothing,” Sen. Lee stressed. “The major networks have gone dark on the videos over the last month,” he said, “And major newspapers have scrubbed the scandal from their front pages.”

On August 31, MRC Culture broke the story that the networks, ABC, NBC and CBS, had refused to report on the release of single video exposing Planned Parenthood during their news shows for 31 days – or one full month.

In other words, ABC, NBC and CBS refused to investigate headlines like these:

Sen. Lee urged that the if the CMP video content were false, “we would know for sure” – through Planned Parenthood’s PR firm, or, rather, the media.

“The mainstream media – Big Abortion’s loudest shoe-banger of them all – would be thundering Planned Parenthood’s vindication from every headline, every home page, every network satellite,” he said. “If the videos were false, Mr. President –  if a pro-life group somehow fabricated this narrative of Planned Parenthood’s greed, barbarism, and cruelty – it would be a story.”

According to Sen. Lee, “the media’s silence indicates their consent.”

“Everyone who has watched these videos knows that they have the power to change minds – and only in one direction,” he continued. “So the pro-abortion news media is doing everything they can to suppress the videos’ exposure.”

Even the slightest mention of these videos would threaten Planned Parenthood’s existence, warned Sen. Lee.

“[D]escribing these videos ... would only lead to curious Google searches, then Tweets, and Facebook shares, and YouTube views,” he pressed. “And inevitably, to public horror.”

Because of that, “Planned Parenthood’s friends in the media” censor the videos as they did the case of Philadelphia abortionist Dr. Kermit Gosnell in 2013, Sen. Lee said.

He added, “Every pro-choice activist – including those with press credentials – knows that the greatest threat to abortion-on-demand is the truth about what it entails.”

“So the media hides the truth about Planned Parenthood and Big Abortion – even at the expense of their own credibility, even to the endangerment of vulnerable women and the enrichment of monsters,” he said. “Like Tolkien’s Gollum, they must protect ‘the precious.’”

In absence of the media reports, Sen. Lee decided to tell the story himself.

“I cannot make leading newspapers, news sites and the television networks tell this story,” he admitted, “But it occurs to me that I can try to tell it myself: here, on the Senate floor.”

“For however vulnerable they may be – both children in the womb and mothers the waiting room -- however forsaken, however afraid, the innocent are never defenseless. Their defense is the truth. And I’m going to do what I can to tell it.”

After his speech, Sen. Lee tweeted out against the media's coverage of Planned Parenthood:

As long as Planned Parenthood’s friends remain mute, I will endeavor to improve upon the silence: http://t.co/7MNA8yNQbw #DefundPP

Americans deserve to know what evil is abroad in their land, & what good can be done to overcome it: http://t.co/7MNA8yNQbw #EndTheSilence