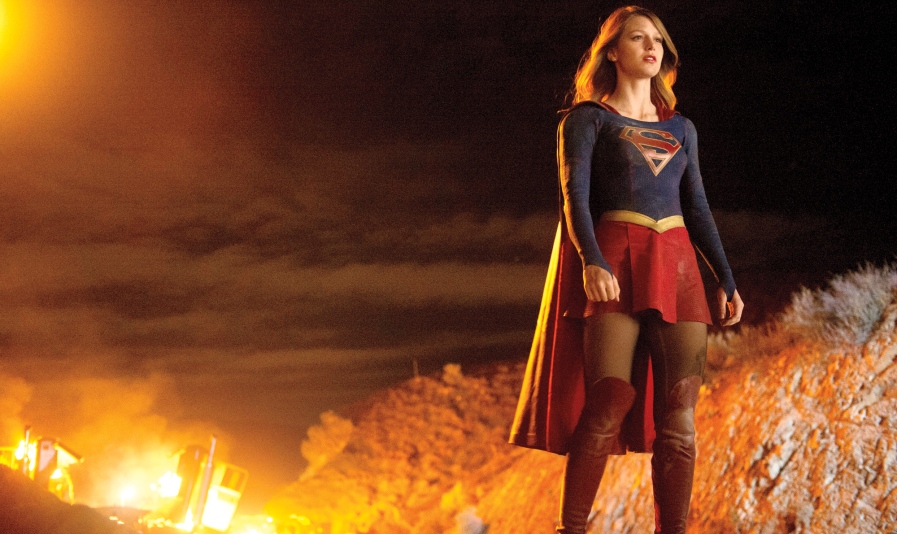 Whether the talking points come from liberal politicians, like President Obama, or the usual suspects in Hollywood, you WILL be subjected to the drama of climate change extremists - even in primetime television shows like CBS’ Supergirl.

From its comic strip introduction in 1939, Superman’s home planet was said to have come to extinction due to an explosion, which then became a new asteroid belt. In Supergirl’s version of Planet Krypton’s destruction, we learn it fell victim to global warming (or climate change, it’s hard to keep up with the politically correct liberal terms) and Aunt Astra (Laura Benanti) returns to ask for Supergirl Kara’s (Melissa Benoist) help to stop the same thing from happening to Planet Earth.

In the first episode of a two-part story arc, “Hostile Takeover,” a flashback to Kara’s childhood includes a conversation between young Kara and her Aunt Astra explaining that occupants of Krypton were killing the planet because they are “greedy for energy.” Just like when candidate Barack Obama lectured us on the rising of oceans threatening planet Earth, Astra spoke of the threats to her planet to young Kara by saying, “The oceans have changed, and the weather.”

Kara: Are you in trouble?
Astra: We all are, little one.
Kara: Why? Tell me. No one else will tell me.
Astra: Krypton is dying. Our core is unstable. It has been for a long time because of how we've harnessed it for power. We became greedy. And now the oceans have changed, and the weather. I'm trying to get people to stop and see what they're doing, and in doing so, I've had to do some difficult things.

Difficult things indeed. Astra and her husband, Non, were environmental terrorists – murdering whoever got in the way of saving their planet. As another flashback shows, Supergirl’s mother Alura (Laura Benanti) and Astra were at odds over Astra’s behavior.

Alura: How could you have done this? You've gone against everything our people hold dear.
Astra: Our people will be dead in a year if they continue treating our world like an inexhaustible playground.
Alura: You killed a guard.
Astra: Non did. It was an unfortunate necessity.
Alura: Come home with me, Astra. I can plead your case in front of the high counsel. Non will go to prison for life, but your sentence could be commuted.
Astra: What do I care about prison? We are dying, Alura! All of us! Kara is dying. I will not let that happen. I don't care how many laws I have to break. We used to be on the same side, sister. We can be again.
Alura: I cannot be part of your designs.
Astra: Then I am sorry.
Alura: Not as sorry as I am.
Astra: No. Don't do this.
Alura: I have to. I can't let you hurt anyone.
Kara:  I don't remember that.
Astra: Your mother signed the death warrants of our entire race and she used you to do it.
Kara: I don't believe you.
Astra: Yes, you do. Much like Krypton, this planet is on the verge of ecological destruction. I can stop it. But the humans won't like my methods. That's why I need you. They trust you. Together we can save them.

Kara is torn between feeling betrayed by her mother, Alura, who didn’t help Astra try to save Krypton and knowing that Astra is a murderer who claims the end justifies the means. What to do, what to do?

In Part 2 of this episode arc, titled “Blood Bonds,” Kara finally gets the truth from Astra. Kara asks Astra to tell her the story of how the relationship was left between the two sisters. The truth is revealed that Alura did believe Astra’s warnings that Krypton was facing destruction. As in today’s world of politics, Astra was using unacceptable tactics in delivering the message. Fear and manipulation are the tools of today’s global warming extremists. Astra and Non took it further by using murder to eliminate “deniers.”

Astra: They sent you back to try again. What makes you think it'll be any different this time?
Kara: Because now, I'm ready to hear what you have to say. I was afraid to listen before. But today, I got so upset, I couldn't think. I didn't want to. I just wanted to hurt someone. Because I was afraid of losing everything that mattered to me. Like you must've felt back home. But if we have any hope for the future, we can't let our fear control us. We have to be better.
Astra: You give me too much credit.
Kara: Because I know the real you.
Astra:  The woman you knew died on Krypton.
Kara:  I still have faith there's good in you.
Astra:  I am not worth your faith. Everyone deserves faith, Astra. Even you. Now, tell me what happened on Krypton. The truth. Astra, please look at me.
Alura: I believe you. I believe Krypton faces annihilation. And far sooner than anyone here will admit.
Astra: Then why condemn me?
Alura:  Because you killed people, Astra. No matter what noble goals you hid behind, nothing will ever change that fact. And I am bound by more than blood in this court. But I promise you, I will fight for your cause, not through fear and manipulation, but through compassion and reason. It is the only hope to save our world.
Kara: I love you, Astra.
Astra: Your mother never stopped believing in me. You are so much like her, Kara.

The light bulb goes off – Kara understands the battle between the two sisters, Alura and Astra – was over a morally unacceptable act, not about Astra "sign[ing] the death warrants of our entire race." Murder is wrong no matter the reason, therefore, Alura was sent to prison to pay the price.

Supergirl continues to be a message of good over evil but the politically correct strategy employed by the liberal left – that of the end justifies the means – is not a moral, compassionate choice.