CNN’s Camerota to Kathy Zhu: Why Not Focus On White Deaths? 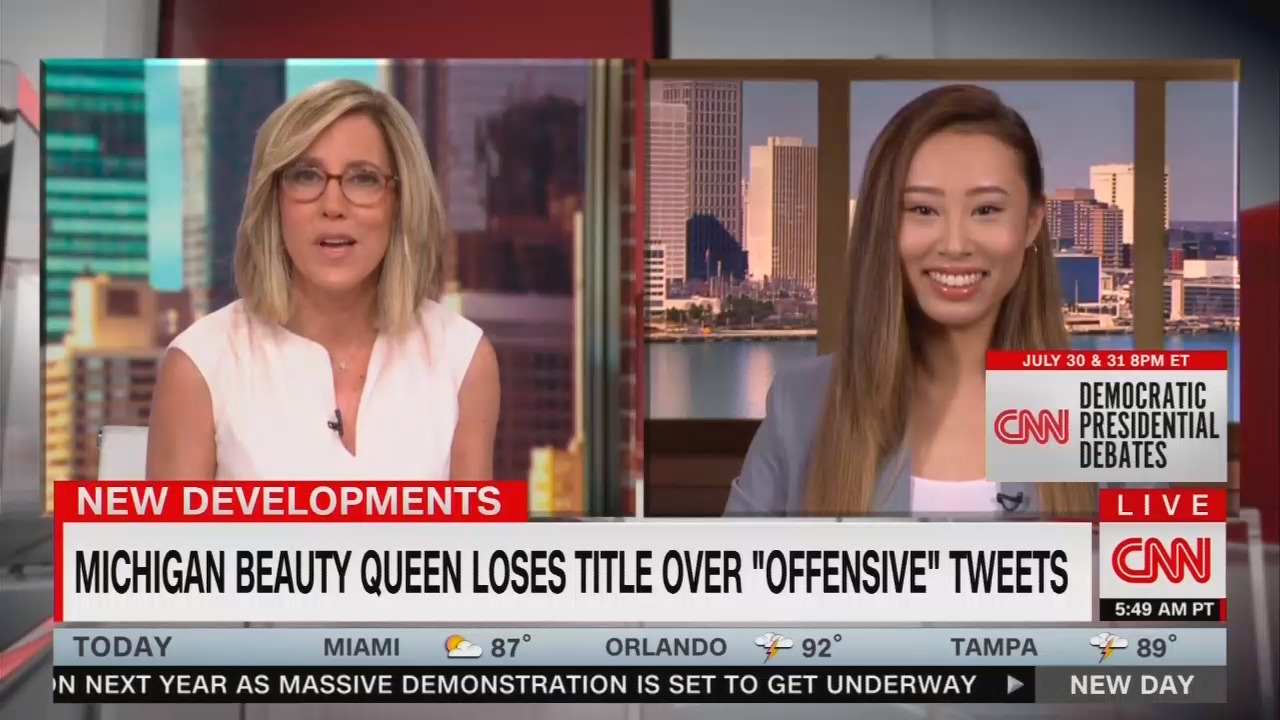 On July 22nd, former Miss Michigan Kathy Zhu appeared on CNN New Day to discuss the stripping of her title. According to Zhu, Miss World America revoked her title because of her political opinions. The beauty queen gained massive popularity in 2016 as a pro-Trump Chinese immigrant and is active on her @PoliticalKathy Twitter account. During the interview, Alisyn Camerota unfairly isolated a tweet from Zhu about black-on-black violence without providing full context, insinuating that the tweet was racist.

Did you know the majority of black deaths are caused by other blacks? Fix problems within your own community first before blaming others.

Camerota asserted that the tweet was offensive because Zhu didn’t give equal attention to statistics about white deaths nor excessive police force. According to Camerota, Zhu should have also pointed out that a majority of white murder victims are killed by other white people. Camerota insisted it’s about “which [statistics] you highlight. You could have said the thing about white people.”

Given the full context of Zhu’s tweet, this criticism doesn’t make a lick of sense. Zhu was responding to a tweet directed at Vice President Mike Pence that read “STOP KILLING BLACK PEOPLE !!!” This was a clear reference to the Black Lives Matter movement. In response, Zhu alluded to an FBI statistic that stated that a majority of African American murder victims are killed by other African Americans -- a fact that is often underplayed by the media. A similar statistic about white murder victims would have been totally irrelevant to the argument.

Camerota also pressed Zhu on a comment she made about a “try a hijab on” booth at her college campus. Zhu stated, “so you’re telling me that [a hijab] is now a fashion accessory and not a religious thing? Or are you just trying to get women used to being oppressed under Islam?” Camerota questioned Zhu on what she meant by women “being oppressed under Islam,” but Zhu rightfully pointed to the ongoing violence against women who refuse to wear hijabs in Muslim countries. Zhu asserted “there are so many women in Muslim countries right now who are being stoned to death because they don’t want to wear a hijab due to their husband’s requirement to do so.”

After her interview, Zhu graciously thanked CNN for having her on, but she also pointed out Camerota’s poorly thought-out objections. Zhu tweeted:

Thank you @CNN for having me on! Although, next time, please learn what ‘responding to another tweet’ means and the importance of staying on subject when having a dialogue.

To be fair, it’s CNN protocol to do as little research as possible.