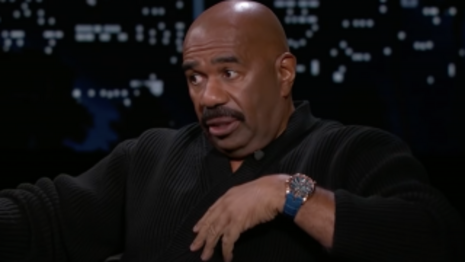 Harvey’s comments against cancel culture – that pernicious cultural phenomenon that seeks to silence those who express an opinion contrary to leftist values – came during a press tour with the Television Critics Association.

Harvey, touring to promote his new daytime courtroom show “Judge Steve Harvey,” addressed a question as to whether he’d ever do a stand-up comedy special in the near future. Harvey denied that he had any intention of doing so because he thinks he’d get canceled over it, and mentioned that if he ever did one, it would have to be at the end of his career so it wouldn’t matter if he got canceled.

It’s sad to hear, but it’s the truth. Imagine if Harvey were to make one joke that mocked anyone other than a straight, white male. That would be it. There would be hit pieces everywhere, and Harvey most likely wouldn’t have his courtroom show anymore.

To bolster his claim, Harvey mentioned some big name comedians who have gotten canceled for irreverent jokes.

“No stand-up that is sponsor-driven can say anything he wants to," the "Original Kings of Comedy" star said. "Chris Rock can’t. Kevin Hart can’t. Cedric the Entertainer can’t. D.L. Hughley can’t. I can go down the list.”

Harvey mentioned that the only comedian who could survive cancel culture is Dave Chapelle, because he’s “subscription-based” as opposed to sponsor-based.

“The only person that can say what they want to say on stage is Dave Chappelle because he’s not sponsor-driven," Harvey continued. "He’s subscription-driven.”

And even then, if you recall, Chappelle had a rough go of it. His jokes against the LGBTQ community during his recent Netflix special, "The Closer," prompted a struggle-session which culminated in a modest employee protest at Netflix. Though, since Chappelle is a major draw for the streaming giant, the company decided to stand by him.

The comedian insisted that comedy has to have a target.

“We can’t write jokes about puppies all the time," he added. "The joke can’t be about bushes all the time. Some of these jokes will have to be about people, because that’s the most interesting topic.”

Harvey concluded, “So if I come back, I’ll have to wait until I’m done. And I’m not done. I want to do one more. I’ll probably have to call it ‘This Is It.’”

Well, we’re glad Harvey’s speaking the truth. Although, this is such an indictment of PC/cancel culture, he might not have to wait until his future special to take the heat.