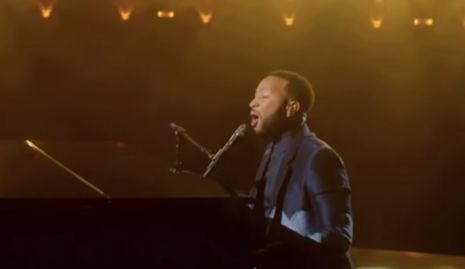 In an interview published by Cosmopolitan UK, the “All of Me” singer and husband to model and Trump hater-extraordinaire Chrissy Teigen, mentioned that Americans may “have to think about going somewhere else” if the president is reelected. Oh, let us guess, John. Democracy is dying in darkness because of orange man. What a shocker.

Definitely. Trump is the source of America’s problems. Elitist jerks like John Legend who disparage conservatives and push radical ideas like “defunding the police” see themselves as the good Samaritans. We forgot.

Legend, who performed during the Democratic National Convention in August, explained that good Americans might have to move to an actual “democracy” as this place continues to shift away from being one. He told Cosmo, “At some point, if that project [to destroy democracy] was to be in any way successful, you’d have to think about going somewhere that is a true democracy, that has respect for the rule of law and human rights.”

“If America chooses to be that place then people will have to start thinking about going somewhere else. It is truly disturbing and concerning,” he added. Though, enough with the hypotheticals, John. What are you really trying to say?

Of course this is about Trump winning re-election. Legend claimed that the president “is trying to destroy democracy” and that it often makes him consider packing up his family and heading to another country apparently. He does think about it “every once in a while,” he said.

Legend lamented, “We were born and raised here, all of our families are here. It would be hard to leave. But I don’t know what one’s supposed to do when you have a leader who is trying to destroy democracy.”

Please go then, John. We can assure you that Donnie has big, BIG evil plans to pursue, like instituting Martial law, bringing back slavery (but for all minorities this time), making your wife share the same existence as the women in The Handmaid's Tale, demanding that fossil fuels are the only legal source of energy, and outlawing veganism, wholesale. We have it on good authority that that’s happening.

Unfortunately, Legend didn’t commit to leaving because he doesn’t believe that “exhausted” Americans would actually re-elect Trump. He’s not “nervous” apparently, even though he’s speaking about packing up his entire life and taking it elsewhere. Of course, it’s just more drama. Remember, not only is Legend a musician, he’s an actor as well.

John, stop being such a tease. We’ll help you pack your bags. Really!