Just in time for the 2020 presidential election, cable entertainment network Showtime announced that its new mini-series about the volatile relationship between President Donald Trump and Former FBI director James Comey will be pushed to air prior to November third. 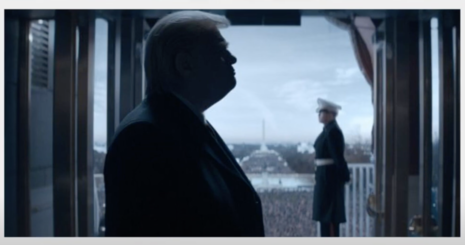 So Showtime is part of the full-court media press to oust Trump.

Showtime’s production, based on Comey’s book A Higher Loyalty, is a four hour long miniseries starring Jeff Daniels “as former FBI director James Comey and Brendan Gleeson as Donald Trump," that "will air Sept. 27 and 28,” Showtime declared on Wednesday.

Of course, this is radical lefty Hollywood, and if they’re so hell bent on getting a show based on Comey’s grandstanding book prior to November 3, you know this is about painting Trump and his transition team as a bunch of thugs.

The news indicated a change from the original air-date, which had been set for a couple weeks after the November elections. According to THR, the original late November scheduling elicited an emotionally-charged response from the show’s writer and director, Billy Ray, who voiced his grievances about the later debut in a email to members of his cast, who were also allegedly annoyed about the show not making a splash before the 2020 election.

In his email to his show’s cast, which includes Holly Hunter, Michael Kelly, Jennifer Ehle, Peter Coyote, Steven Pasquale, Oona Chaplin, William Sadler, Scoot McNairy and Kingsley Ben-Adir, Ray wrote, “I know what a disappointment this is to you. It is for me too – because while I’ve made movies about my country before, this was the first time I ever made a movie for my country.”

Sure, you’re the savior of the human race, Ray. He continued, writing, “We all were hoping to get this story in front of the American people months before the coming election. And that was a reasonable expectation considering that we’d been given a mandate by the network to do whatever was necessary to deliver by May 15."

Ray further complained in his email about the highest levels of Showtime's parent company, ViacomCBS pushing the show’s debut past the election. “Word started drifting back to me that a decision about our airdate had been made at the very highest levels of Viacom: All talk of our airing before the election was suddenly a 'non-starter.,’” Ray explained, adding, “I and my fellow producers asked for a chance to plead our case on the matter, but we were told that even the discussion itself was a 'non-starter.’”

Apparently this internal pressure motivated Showtime to reschedule the series, which THR claimed will tell a “behind-the-headlines account of the turbulent events surrounding the 2016 election and its aftermath through the story of two powerful figures, Comey and Trump.” Though really, it’s based on Comey’s hit piece of the president, who he has referred to as a “shrunken, withered figure.” It’s obvious why they want this out ASAP.