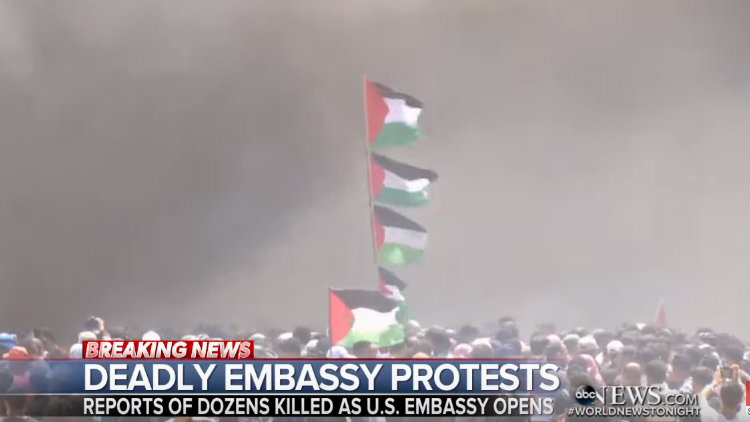 Two of the three major news networks have been feeding into the pro-hamas, anti-Israel/anti-Trump propaganda this week. Both ABC and NBC’s evening news segments showed blatant bias towards the violent protesters in Gaza during the official unveiling of the US Embassy in Jerusalem, completely disregarding Hamas’s history of manufacturing casualties real and fake to bring international condemnation on Israel.

Both NBC’s Lester Holt and ABC’s David Muir painted a tragic picture on Monday night of the Palestinian protests, reporting that over 50 people were killed and thousands were injured. However, both segments failed to mention the protest’s orchestration by terrorist group Hamas, the many-non lethal tactics of the Israeli troops at the border and their numerous, ongoing attempts to warn protesters away from the border fence. Instead, they played up the plight of a “people without a country” compared to the reckless Netanyahu regime.

Lester Holt and his journalists in the field drew a stark contrast between the celebrations at the embassy unveiling, and the butchering of undeserving Palestinian protesters. The narrative centered around the fact that President Trump’s “highly controversial” recognition of Jerusalem as the capital of Israel was a giant middle finger to peace in the region. Correspondent Richard Engel mentioned that previous presidents had promised to recognize Jerusalem as Israel’s capital, but “deferred the decision, fearing it could cause an outbreak of violence in the volatile middle east.”

“And today, that’s exactly what happened.”

Both NBC and ABC moved between shots of a peaceful ceremony with Jewish and American elites, and what NBC described as “tear gas and bloodshed” at the Israel Gaza border, conveying how Trump’s move invited the chaos previously feared, while his officials relaxed in a cushy ceremony among diplomats who could care less about the carnage 60 miles away. ABC took time to disparage some of those in attendance, mentioning “Pastor Robert Jeffress of Dallas, who has preached that Jews are destined for Hell, along with Mormons, Hindus, Muslims.”

In terms of the protests themselves, NBC mentioned the desperate Palestinians being gunned down by what NBC correspondent Matt Bradley described as Israeli “artillery and sniper fire,” and ABC described how the downtrodden Palestinians marched to their deaths “waving flags of a people without a country,” as IDF soldiers bombarded them with tear gas and live ammunition. Neither network reported that, throughout this six week period of border violence, Israeli forces have many times tried to issue clear warnings to border protesters not to attack the fence.

In reality, Israeli forces reportedly dispersed leaflets up and down the border in order to warn protesters of getting too close. Upon that being ignored by desperate Palestinians, border guards dispersed tear gas and other non-lethal deterrents. Despite this, Palestinians began hurling flaming tires and slinging rocks at border guards. Israel then responded by using ball ammunition to cause injury. IDF soldiers then began to use lethal force, as protestors were still unrelenting. Thus the real violence and shooting broke out.

Regardless of the desperate and combative nature of the Palestinians, both networks were reluctant to describe it as the brutal battle it was. ABC simply called it a “human tide of protest.”

Both ABC and NBC also failed to mention that this bloodshed was encouraged by terrorist group Hamas. The group orchestrated the protests in order to capture the attention of the world and frame Israel as a totalitarian aggressor looking to needlessly wipe out Palestinians during the installation of the embassy. Palestinians were goaded on by Hamas to protest to the death, ensuring as much violence and chaos as possible.

Hamas leader Yahya Sinwar has reportedly rejected peace talks with international groups, vowing to push on at the border, no matter what. He stated, “We can’t stop these protests, we are supporting, even leading them.” He claimed that the protests will be “like a tiger, running in all directions.”

While CBS was more forthcoming on the reality of the situation -- they did mention Hamas and the fact that Israel issued warnings to the protestors, the major media networks seem to have bought into the narrative that Hamas is pushing. They are implying that Trump and Israel are being reckless with middle eastern diplomacy and that marginalized Palestinians are dying because of it. But in reality, it’s a desperate fight to the death against Israel, inspired by propaganda from the area’s leading terrorist group.