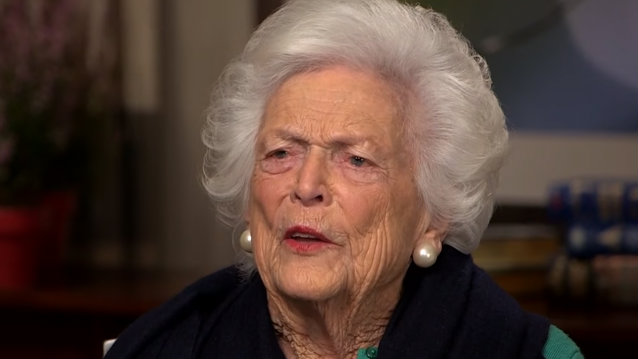 On Monday, political leaders and many media outlets shared thoughts and prayers for former first lady Barbara Bush, who recently left hospitalization so that she could spend the remainder of her life at home, surrounded by the comfort of loved ones. Some in the media however, couldn’t help but remind everyone of her supposedly tarnished legacy when it came to race relations in America, because if you’re a rabid member of the resistance, you can’t even wait one morning to attack a conservative’s character, even if she is at the point of passing on.

Newsone, a journalism platform that touts itself as having the “Black perspective,” published an article Sunday night titled, “Forgive But Don’t Forget: Remembering Those Times When Barbara Bush Waded into the Waters of Race.” The piece started off by recognizing Bush’s recent health as sad and hard for any loved one to endure, but pointed out that what’s truly tragic is the “pain experienced by Black people in the wake of several instances of Bush’s tone deaf commentary when it comes to race.”

Though Newsone admitted that they didn’t consider Barbara Bush an intrinsically racist human being, they argued that her rhetoric regarding race relations in America left much to be desired.

First of all, the Bush’s skepticism towards Anita Hill’s sexual assault accusations against Justice Clarence Thomas “showcased her apparent indifference to the plight of Black women’s quest for legitimacy in the eyes of white America.”

“Is this woman telling the truth?” Bush asked in her 1994 autobiography. “I do not mean to sit in judgment, but I will never believe that she, a Yale Law School graduate, a woman of the 80s, would put up with harassment for one moment, much less follow the harasser from job to job, call him when she came back to town and later invite him to speak to her students at Oral Roberts University.”

You’d have to be Sherlock Holmes to detect the racism in that statement. On this evidence, Bush’s crime was to think more of Anita Hill than Hill deserved. In today’s radical lefty land, her mere skepticism is construed as victim shaming and a defense of the evil patriarchy no less.

That one’s mystifying, but the next two are inexplicable, unless Barbara Bush has the power of seeing the future.

NewsOne also complained that Mrs. Bush couldn’t decide whether her husband’s political rival, Pat Buchanan, was de facto racist or not. The article commented that Bush’s indecision as to whether the former presidential candidate’s slogan, “Make America First Again,” was problematic, especially considering that it was “nearly identical to that of Donald Trump.” Apparently, the only non-racist campaign slogans are “I’m With Her” and “Hope and Change.” And Bush should have known in 1994 that she’d be judged in 2018 by people whose racism detectors are so finely tuned they can detect bigoted thoughts.

That apparent White sympathy seemed to also be on display in 2014, when she endorsed the campaign to re-elect Maine Gov. Paul Le Page. Bush supported him by appearing in a campaign ad two years before he called people of color “the enemy right now.” [emphasis added]

Unless you assume that Barbara sat around badmouthing minorities with Le Page, how exactly could she be responsible for what he said two years later?

But NewsOne’s main gripe with the former first lady’s almost racist legacy was her comments surrounding the hurricane Katrina disaster in 2005. Since most of the people affected by the hurricane were black, Bush’s comment on the “underprivileged” victims hit the racist mark for many.

Of the victims, she stated, “And so many of the people in the [Houston Astrodome] here, you know, were underprivileged anyway, so this is working very well for them.” NewsOne went on to say that, although such comments were offensive, Black people are the “most forgiving people in the history of humanity, so we will probably mourn Bush’s death with respect.”

Well, it’s good that we can all bury the hatchet. I just hope that the social media attacks on Barbara inspired by this recent article constitute sufficient reparations on her part during her illness.