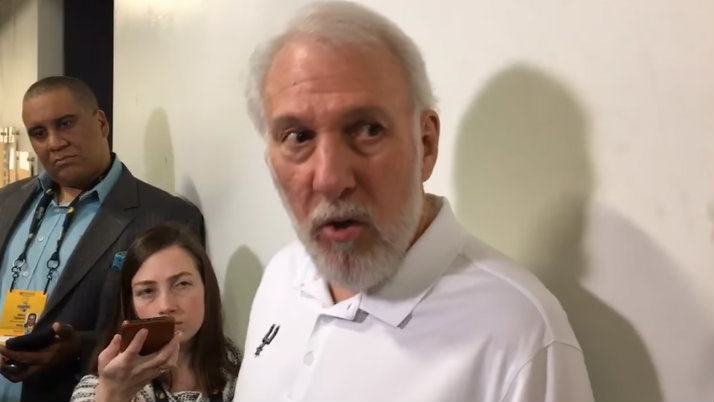 The preeminent social justice warrior in sports, Gregg Popovich, is speaking yet again on the current state of political affairs -- and that includes bashing the president.

The “woke” NBA coach recently addressed America’s gun debate, while dragging President Donald Trump’s name through the mud. So much for focusing on basketball.

Before Sunday’s game between the San Antonio Spurs and the Milwaukee Bucks, the politically-outspoken Spurs coach provided his opinion on Saturday’s March for Our Lives. Tugging on the heartstrings of every sensitive progressive nationwide, the coach spun his own emotional plea for gun control at the expense of the president.

“If you sit for a moment and imagine those bullets going through those bodies, and what those bodies looked like afterwards,” Popovich lamented to CBS Sports, “how can the president of the country talk about all the things he’s going to do and then go have lunch with the NRA and change it?”

That’s right, Donald. How can you include the nation’s largest gun lobby in the debate about guns?

This is another example of the progressive gun-control debate tactic that is to cast aside a real discussion on weapons, and turn to using graphic descriptions of the crime scene in order to inspire further outrage.

“It’s just cowardice. A real leader would have been in Washington D.C., this weekend, not at his penthouse in Mar-a-Lago,” he added. “He would have had the decency to meet with a group, to see what’s going on, and how important it is, and how important our children should be to us. So for all those politicians involved, it’s just a dereliction of duty.”

Does the coach remember that several Republican politicians, including the President himself, immediately met with victims and their loved ones after the Parkland shooting? Does he remember when Florida Republican Senator Marco Rubio availed himself to a bitter lecture by the student activists during the CNN town hall? Maybe not. It just goes to show that in this entire debate, there seems to be no compromise on the part of the left (or the liberal media).

“You are either with us, or against us,” as the gun-control activists from Parkland like to say.

Considering that the Spurs lost to the Bucks on Sunday, maybe Coach Gregg should have afforded more focus towards his team’s performance, rather than giving conservatives another condescending lecture.