Some social media critics have been pondering whether Bruno Mars really deserved Album of the Year at 2018’s Grammy’s. Though, this discussion didn’t revolve around the actual quality or mass-appeal of his record, but on identity politics, and whether his win was predicated on dreaded “white supremacy.” 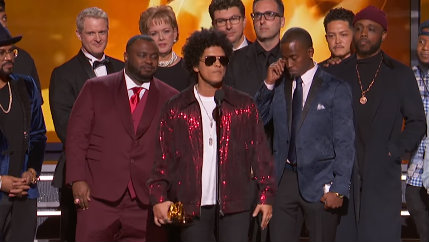 Newsweek reported on Friday that “writer, activist, and social critic,” Seren Sensei is not necessarily happy with Mars’ accomplishments. In a video that went viral on friday, Seren argued that “Bruno Mars 100 percent is a cultural appropriator. He is not black at all, and he plays up his racial ambiguity to cross genres.”

Although the “Finesse” singer is often mistaken as black, he is actually multiracial. His mother is Filipino, and his father is half Puerto Rican and half Ashkenazi Jewish (a Jewish person whose ancestors are of Eastern European origin). He was raised in Honolulu, Hawaii.” The problem for black music purists like Sensei, is that Mars’ music is “infused with with R&B, funk, soul, reggae and hip-hop—traditionally African-American genres.”

The article acknowledges that this is the same type of criticism that has been leveled at Justin Timberlake, whose own R&B-influenced music has attracted similar backlash over the years.

To add to her case against Mars, Sensei slammed his lack of originality and discussed how it’s ridiculous that he’s taking the pop world by storm by co-opting the work of the black artists who created the R&B sound we know today. She asserted:

She finally got to the point, stating, “Bruno Mars got that Grammy because white people love him cause he’s not black. Period. The issue is we want our black culture from a non-black bias, and Bruno Mars is like, ‘I’ll give it to you.’”

This rant has since inspired backlash on Twitter. Many responded to Sensei’s video by pointing out that several of today’s popular hip hop artists would deserve the same amount of scrutiny: non-African American rap stars like Post Malone, Tekashi, and Lil’ Pump. NPR’s Gene Demby asked “And also aren’t all these arguments in this video about Bruno Mars negated or complicated by the fact that the biggest pop star in the world is a Black woman [Beyonce]?"

Still, Sensei has yet to back down. She waved off critics, saying that what really matters is that a Grammy win demonstrates “white acceptance,” something Beyonce still hasn’t received. She claimed, “Bruno is someone who, in my opinion, is willingly benefiting from his racial ambiguity in order to utilize the system of white supremacy to get ahead. That makes him an agent of white supremacy.”

Heaven forbid that Mars actually had a popular, quality album on his hands this year. Don’t worry though, I hear artistic merit will not be a factor at the 2019 Grammy’s. He’s finished.