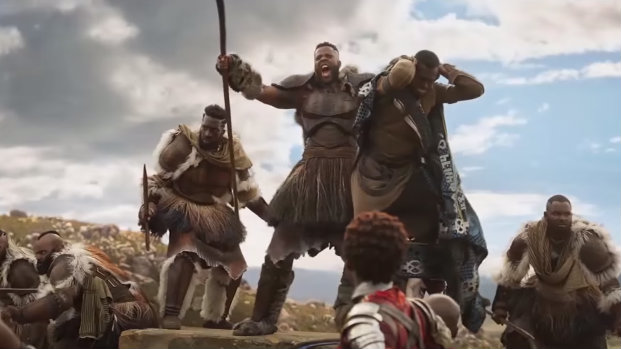 Black Panther set box office records on its way to becoming “a watershed in cultural history of African Americans,” wrote The Miami Herald’s Leonard Pitts Jr. Yet, the movie was typical Hollywood – filled with violence, including 163 shootings, while Marvel stars call for gun control.

Lupita Nyong’o, who played Black Panther’s love interest Nakia, advocated for gun control in the wake of the Orlando shooting. The actress posted a long message on Instagram, saying “most importantly, we simply need to put down the guns!” Other Marvel Avengers have weighed in as well. Captain America’s Chris Evans has called for “common sense gun reform.” And the Hulk, played by Mark Ruffalo, has criticized conservatives for giving thoughts and prayers, and not actively pushing gun reform.

This hypocrisy is unusually blatant even for the film industry. It doesn’t matter whether the movie is Black Panther, Kingsman: Golden Circle or Gangster Squad. Hollywood promotes violence.

Yet, critics have been raving about how great Black Panther is and have touted it as a watershed moment in pop culture. Even former First Lady Michelle Obama argued, "It will inspire people of all backgrounds.”

The media agree that the movie sends a positive message. And it’s certainly fun with a decent moral message, but it is also off-the-charts violent. The Media Research Center tallied 373 instances of violence within the 2-hour runtime. 163 of those were instances of gun violence. This included the standard rifle and pistol attacks, and the use of high-tech Wakandian weapons, as well.

Another 210 violent acts involved punches, kicks, choke holds, and attacks with swords. Characters were stabbed and/or sliced by spears and knives, and (Spoiler alert) much of the climax of the movie involved a no-holds-barred fistfight between the Black Panther and his rival, Killmonger.

The climax also included a sprawling battle scene where numerous people were shot, stabbed, blown up, and also stampeded by armor-wearing rhinos. Dead bodies were shown littering the battlefield in several instances, and while it’s implied there were heavy casualties throughout the movie, the audience was shown around 20 of them.

The film’s main villain, Killmonger, (played by Michael B. Jordan) is also marked by a large body count. (Thousands of raised tattoos on his body represented actual kill marks.) He trained with the U.S. military for years. His quest for power also sums the movie’s view of violence: “When I tell you to do something, I mean that shit. Burn it all.”

Even Killmonger’s murder spree is ended by a brutal stabbing.

This kind of violence though is par for the course on Hollywood’s action movie circuit -- to the point where scenes like this are unremarkable. But after pumping pop culture with scenes of gratuitous gun violence, it’s Hollywood liberals who point the finger at conservatives’ obsession with guns.