'The First Purge' is a MAGA-Themed Horror Movie

It’s no question that the liberal media love to lament that Trump’s election was armageddon and that Americans are currently living in some dystopian wasteland. In an effort to spread and cash in on this narrative, Hollywood is spending millions of dollars on another propaganda piece -- a MAGA-themed installment of the horror franchise, The Purge.

The movie, officially titled The First Purge, is a prequel set in the The Purge universe. The premise of these horror films is that near-future America is so plagued by crime and hostility, that the government decides that an annual day of legal crime is the best solution. These movies follow the lives of ordinary people on the day of the Purge, who are terrorized by other citizens who are given a free pass to murder and steal.

The First Purge tells the story of the US government’s first experiment with a small town purge that ends up out of control and necessitating the annual nationwide purge to quell the rampant lawlessness.

To add to the horror this year, the movie’s marketing team thought throwing in some Trumpian themes would be especially poignant. For the left, Trump’s America is a terrifying, real-life dystopia, so of course it would be the perfect thing for this summer’s horror movie circuit. 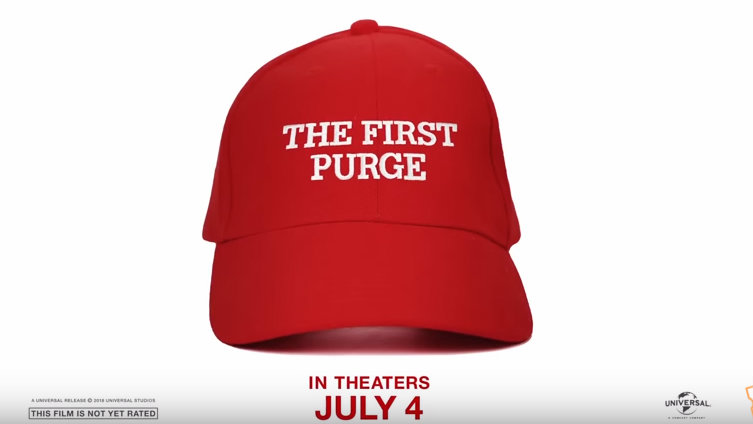 The poster for the The First Purge is inspired by the ever-menacing Make America Great Again hat. On it is the infamous red cap, with the white letters forming the title for the new movie. To the left, this is essentially an SS helmet, so why not? The movie’s release date is printed at the bottom of the poster as July 4th.

The trailer for the film presents a dark satire of American patriotism. It shows images of America’s landmarks, citizens, and amber waves of grain combined with an eerie voiceover that is reminiscent of the President’s “America First” rhetoric. It reads:

What makes America great? The answer’s simple, really. Americans make America great. You are the lifeblood of the nation and your rights as Americans must be safeguarded. There’s only one solution to keep our country great. A new tradition. Participate today, and nothing will make you prouder than when your boy looks up at you and says, ‘Dad, I wanna purge too.’

This is not the first time major productions have taken potshots at the Trump administration. 2016’s Purge: Election Year promoted itself on the mass hysteria surrounding the 2016 campaign. Its promotional material used the tagline “Keep America Great.” GQ’s Kevin Nguyen described the movie as “surprisingly astute about the American Psyche,” and mentioned that the purge “is a tool conservative, rich white men use to control the nation’s economy.”

Last year’s season of American Horror Story fed off of liberal’s anxiety in the wake of the Trump election, with it’s first episode depicting election night’s results in a morbid, disconcerting light, and its finale showing a “revenge fantasy in which a woman finally gets to win a big election.”

Since Hollywood is losing its clout, it seems to be trying all sorts of cheap tricks to get the public’s attention. However, with 75% of viewers reacting favorably to Tuesday’s Presidential Address, maybe their endless Trump bashing won’t be able to save them anymore.