'The Root': Jerry Rice Doesn't Want Kaepernick to Cause ‘Trouble on the Plantation’

You know you’re about to read a truly amazing article when it references “black Jesus” and “the plantation,” by the first paragraph.

Yet, lo and behold, that is exactly what we found in The Root on Tuesday, in an article titled Jerry Rice on Colin Kaepernick: ‘All Lives Matter; Don’t Disrespect the Flag’ Fix it, Black Jesus. Kirsten West Savali sought to excoriate Jerry Rice for his tweet criticizing Colin Kaepernick’s decision to sit during the National Anthem:

“NFL Hall of Famer and former San Francisco 49er Jerry Rice wants everyone to know that “All lives matter,” and he’s urging Colin Kaepernick to stand up like a good Negro and pledge allegiance to the flag before he causes trouble on the plantation. 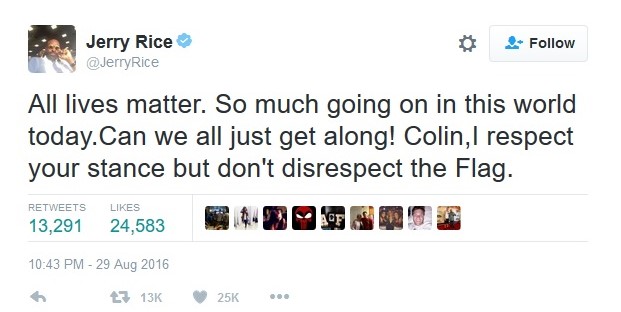 “Philadelphia Eagles linebacker Myke Tavarres, rapper T.I., the NFL and most of black Twitter may be supporting Kaepernick’s stance against standing for “The Star-Bangled Banner,” but Rice just wants us “all to get along.” Maybe if police officers would stop gunning down 12-year-old black boys in the park or assaulting 15-year-old black girls trying to swim, we could give that a chance. 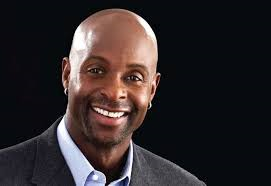 As previously reported by The Root, in 1995, former NBA player Mahmoud Abdul Rauf refused to participate in the “nationalistic ritualism” of recognizing the flag and singing the anthem. And in the last year of his life, baseball legend Jackie Robinson also said that he couldn’t “stand and sing the anthem, nor salute the flag.”

Why? Because Robinson realized that he was “a black man in a white world” full of injustice.

When Cam Newton faced what many NFL fans believed to be racial discrimination, Rice, arguably one of the greatest receivers of all time, said that the NFL was post-racial.

“I think the NFL is so much further now,” Rice said. “I don’t think race is a factor.”

Clearly, he still holds on to that ridiculous notion. The rest of black America will just keep on hoping we don’t find ourselves on the business end of a cop’s gun while walking, or driving, or standing, or…

Being black in America.

Stick to shutting up, Rice—or dancing with the stars.

And you know what’s going to fix all those things? Sitting down during the national anthem!