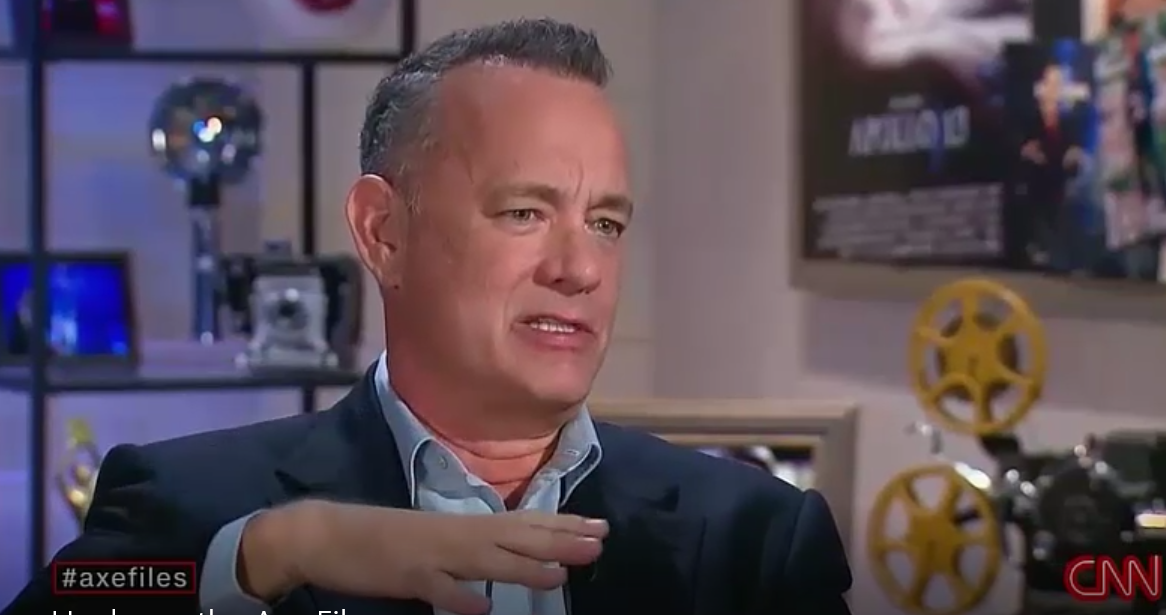 When did actors become the ultimate authority on the constitution?

CNN’s David Axelrod (who, lest we forget, was Obama’s political guru) interviewed actor Tom Hanks on The Axe Files on December 2, and pushed Hanks to pontificate on Donald Trump, the constitution, and fake news. When Axelrod asked Hanks whether he was “concerned” by the president “target[ing] news organizations,” Hanks responded, “As an American, it concerns me because it’s monkeying around with our Constitution.”

Again, this is David Axelrod, who worked for Barack Obama. He now has a show on CNN. He’s asking wonderfully leading questions about Donald Trump’s criticism of … CNN. Is just a little self-awareness too much to ask?

Anyway, according to Judge Hanks, media criticism is meddling with the constitution. Where is that in the amendments?

In the hour long interview, Hanks went on to talk about the fake news phenomenon: “It’s relatively obvious, I think, as what is trying to go forward. When you tear down these institutions to a level and say you can’t believe anything that is in any of them, that raises the stock of those agenda-filled other institutions and what not so that if you can’t believe them, well that means you get to believe some of the other stuff that is in these and so what is happening is that dilution, the dilution of the great … they’re throwing dirt and oil into a bucket of water. So it all becomes undrinkable after a while,” he told Axelrod, the former senior Obama official who now has a show at … CNN.

The real problem, Hanks thought, were the “conspiracy theorists.”

“And when conspiracy theorists end up having the same amount of purchase as 27 reporters who are trying to get to the bottom of some records somewhere, trying to get to the bottom of what was said about  Vietnam in 1946 and 1957 and 1963, well, then you’re monkeying around with what I think the United States of America has been based upon, which is the great freedom to say what you want, assemble with who you want to, and read and be informed by those people that you want to turn to.”  Well, perhaps if journalists adhered to the code of ethics, these problems would not be so prevalent in the media.

What the current administration is doing, is “subtle and insidious,” he told Axelrod, an official of the last administration, who now has a show on … CNN.

“I think what the current administration is doing -- I don’t know that they’re saying we have to shut them down so they don’t publish anymore. What is happening is something that is more subtle and more insidious and I think has more fingerprints from other totalit...other governments in the past who have said look, we can’t shut them down because that will cause outrage. But we can denigrate them. We can, we can, we can call them names. We can tell, we can tell people that those are not the facts. That’s what he’s saying.”

The horror. At least he stopped himself from saying totalitarian. Where that thought train was headed is unknown.

But Hanks found hope and comfort in the prospect of the 2018 elections, as he told Axelrod: “we have an election coming up in less than a year now. 2018 is going to send a message that is going to reverberate much more than any Senate hearings or congressional stuff. That election in 2018 is going to prove one of two things. We will continue along and we will have the government we deserve. Or a lot of people are going to show up and be motivated to vote in order to send out the wave and say we are not satisfied with the way things are going right now. So if there is a turnout that says, 'We’re not satisfied with this,' hey, baby, that’s even better than going through the machinations.”

Watching CNN turn to a celebrity to reiterate the same groundless arguments in CNN’s defense is somewhat pathetic. Questioning a news source is part of free speech; a news source that angrily claims it cannot be wrong is dangerously close to being a propaganda machine. Did I mention who David Axelrod is?