How did the NFL kneeling protests become the hip, edgy thing to do in entertainment?

It seems to be the way most award show hosts want to kick things off, just to keep things stale and old. At the Soul Train Awards, on November 26, host Erykah Badu decided to ignore the usual musical intro number and instead simply took a knee on the stage, “for Kaep,” she told the audience. 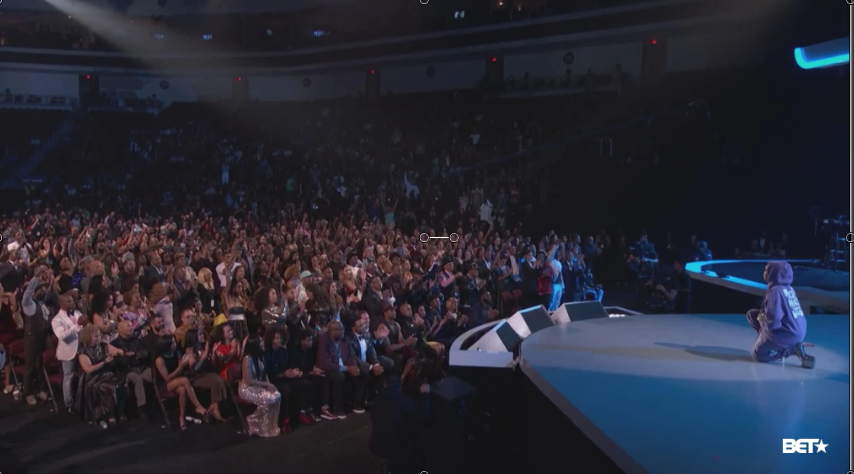 “I know I usually do a big elaborate musical number, right here, but right now I feel I need to do this. This is for Kaep! Kaep we appreciate you giving up your life, giving up your dream, cuz you believe in us. So this is how y’all feel!” The audience cheered, held up fists, and clapped. Yes, because Colin Kaepernick gave up his life to kneel on the NFL field. That makes a ton of sense. He seems to be alive and doing just fine, these days.

The singer, with a net worth of $12 million, told the audience she had her phone set to notify her every time Trump tweeted, which honestly sounds a bit obsessive.

The host threw some more dirt at Trump, coming up with a fake Trump tweet she posted on the screen behind the stage: “Erik Baydo kneels at 30th Slave Train of Soul Awards. Cancel Now! #CountryMusicBetter.” A tweet so racist and offensive that only the person who wanted to be offended could come up with it. Nothing says class like creating things to be offended by.

Nothing said class like Badu’s Trump dance moves, which included names like “the running immigrant” and a move she said was the “grab them by the vagina” move. Someone in the audience could be seen saying “that’s nasty.” Badu was forced to stop because the audience found the dance moves in poor taste, needless to say.

Only one second or so of the opening monologue was aimed at someone other than Trump. Badu briefly poked at sexual predator Harvey Weinstein, saying she had to get up from her kneeling position before Weinstein “showed up with his hands on his hips in front of me.”