Regardless of how childish something might be, the left will praise any action that lines up with their ideals.

For example, take the Patriot Prayer Freedom Rally, scheduled to happen over August 26 and 27. After Congresswoman Nancy Pelosi decided it was a “white supremacist rally,” the people of San Francisco swallowed the lie and decided to protest--by leaving dog feces on Crissy Field before the rally. And Bustle reported the protest as “genius.” Apparently, no one saw that transexuals and minorities would be speaking at the rally. 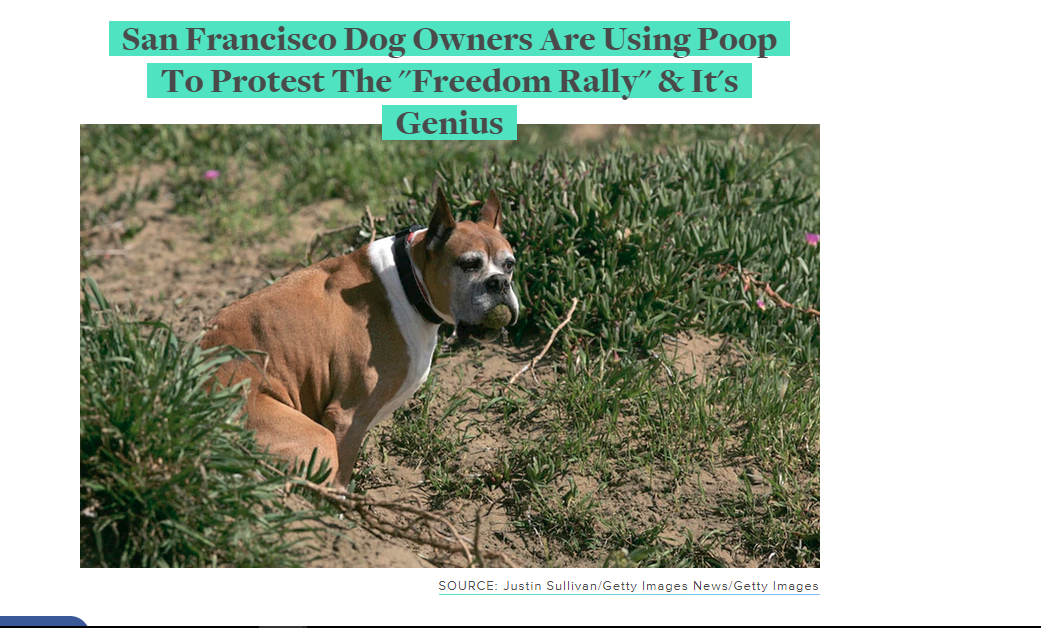 Bustle even quoted the organizer of the "counter-protest," Terrence Ryan,  as saying, “I just had this image of alt-right people stomping around in the poop. I was trying to think of a way where we could have an act of civil disobedience without having to confront each other face to face and risk physical contact.” Essentially, they are trying to paint this rally as the second Charlottesville.

One has to wonder: did Ryan read the Patriot Prayer announcement on Facebook? The group specifically stated that they are bringing in minorities to speak at the rally. It said, “Before you accuse Patriot Prayer as being hateful, please find specific examples. You will not find any hate speech, you are being lied to by corrupt politicians. SF is supposed to be a safe haven for minorities. If this is true then please be respectful to the speakers we are bringing in. 3 black, 2 hispanic, 1 asian, 1 Samoan, 1 muslim, 2 woman, and 1 white male. There will also be an opportunity for an open mic for moderate Americans.”

There is also a transexual who will be leading a prayer group at the rally. But all the people saw was that it was organized by a Trump supporter. While Bustle begrudgingly admitted that the group had stated that it was not a “hate group,” it also gleefully reported that the rally has less than half of the pledged attendees that the “poop protest” has.

Why is Bustle encouraging this kind of passive-aggressive childish behavior? The Patriot Prayer Rally isn’t illegal, while a rally to have dogs defecate on public property is an act of civil disobedience.

Are these people--and Bustle--guilty of the same kind of hatred that they accuse Neo-Nazis of harboring? Even the ACLU has defended the group Patriot Prayer.