Okay, Sure: 'The View' Co-Host Behar Currently Basing Her Career on Hating Trump

The long-standing host of The View spent all six minutes of her Late Night appearance talking about the POTUS and how she felt about him. In an attempt to promote her new book, coming out in October, which will, according to her, be all about Trump, she listed off her interactions with him. 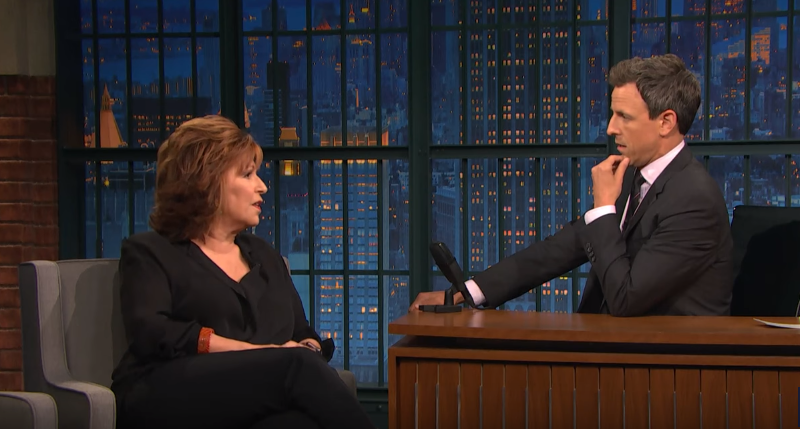 Meyers’ first question to his guest: “What has your relationship with him been like over the years?” Her response was, “Well, it’s not intimate.”

She talked about how apparently Trump has had a friendship with her that has been a rollercoaster of love and hate. All on his side of course. Behar has no feelings on the matter at all. Except that she wants him to hate her. “He should hate me now,” she said to Meyers. “I rip him on our show all the time. What are you going to do? A girl’s going to do what she wants to do.”

Meyers and Behar talked about her experiences at Trump’s second wedding (“there were a lot of criminals there like O.J. Simpson!) and how at the ceremony someone took the film out of her camera (“Almost like the KGB was there!”). She also touched upon other Trump-related subjects, such as his hair, Ivanka, and all the guest appearances Trump made on The View.

Her opinion on Melania Trump was very detailed: “I feel sorry for her, she had to sleep with him once. And then when she was in New York, and we had to pay a million dollars a day to keep her here just because she doesn’t want to sleep with him,” Behar sneered.

The View host was also a little bitter because in his last book, Trump accused Behar of having no talent. So now she is going to fight back with her book. As she told Meyers, “I’m only hoping it comes out before he’s impeached. I want to sell the book you know.”

Her career seems based almost completely on bashing Trump these days. And Behar isn’t hiding that fact at all. She ended her interview saying, “Impeachment would be good for the country but bad for my book.”