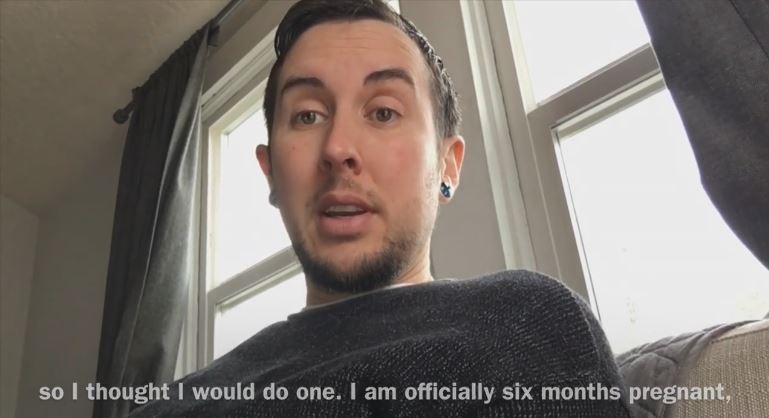 CNN reported today that trans man Trystan Reese “is not just a guy with a beer belly.”  He’s a man who is in his third trimester of pregnancy.

The trans man, who, according to CNN reporters Carma Hassan and Dakin Andone, “was assigned the female gender at birth,” apparently never wanted to change his body parts.

Wait, so did he want to stay female? Not exactly, Reese said. “I made the necessary changes so that I could keep living in my body.” Reese has changed himself by using hormones and surgery, but he kept his uterus.

In a video, Reese explained to his audience why he wanted to have a baby as a man. He said part of the reason involved dismantling the apparent myth that all trans people hate their bodies. For him, this myth is not true, since he said, “I never felt like I NEEDED to change my body. And I for sure do not hate my body.”

He made the situation even more confusing by saying that he never wished to be a man from the start. Reese also had to explain that he didn’t hate being a woman, he “just didn’t happen to BE one on the inside.” Therefore, he felt that it was ok for him to go back to being a woman for a long enough time to be pregnant and give birth. CNN reassured their audience that the medical staff handling Reese’s pregnancy is in fact trained to be sensitive towards Reese and his partner throughout the experience.

Reese told CNN that the reason why he wanted to be pregnant and give birth is because he “wanted to see more love in the world.” The couple is excited to add to their family of children with a child from natural birth.

CNN did not acknowledge the controversy that this event has caused. Instead, they painted the couple as a normal family, with standard traditional values. If anything, this article was a celebration of transgender issues and extremely biased towards the LGBTQ cause.