Two comedians walk into a garage... No joke, that's exactly what happens in the most recent episode of the ABC sitcom Last Man Standing, featuring a cameo appearance by former Tonight Show host Jay Leno. In "The Road Less Driven," Leno, who is a car fanatic, plays a mechanic named Joe who has sold an old Impala to Tim Allen's Mike Baxter, also a known car enthusiast back from his days of playing Tim "The Tool Man" Taylor on ABC's Home Improvement.

Mike is checking out Joe's garage when he makes a quick jab at Obama and over-regulation:

-Mike: You have a pit. I've always wanted a pit. You can't have a pit these days 'cause of zoning laws. [ Chuckles ] Obama.

Both comedians could be considered centrist or right of center. Tim Allen has established Last Man Standing as a conservative show, making fun of Hillary Clinton and liberal scare tactics already this season. Leno doesn't go nearly as far, but he was at least known to make jokes at Obama's expense during his time as Tonight Show host and was far more fair to both sides of the aisle than his competitor, former Late Show host and crotchety liberal, David Letterman.

Speaking of Letterman, Leno name drops him in a tongue-in-cheek scene about fame that also references Allen's role in The Santa Clause movie franchise.

-Mike: Why didn't you just say something?

-Joe: Because I didn't want to be rude, Mike. Okay, maybe that's a lesson you should work on.

-Mike: Really? Maybe you should work on honesty.

-Joe: What is that supposed to mean?

-Mike: You don't have a rock crusher. You just wanted to spend time with me.

-Joe: Is that what you think? 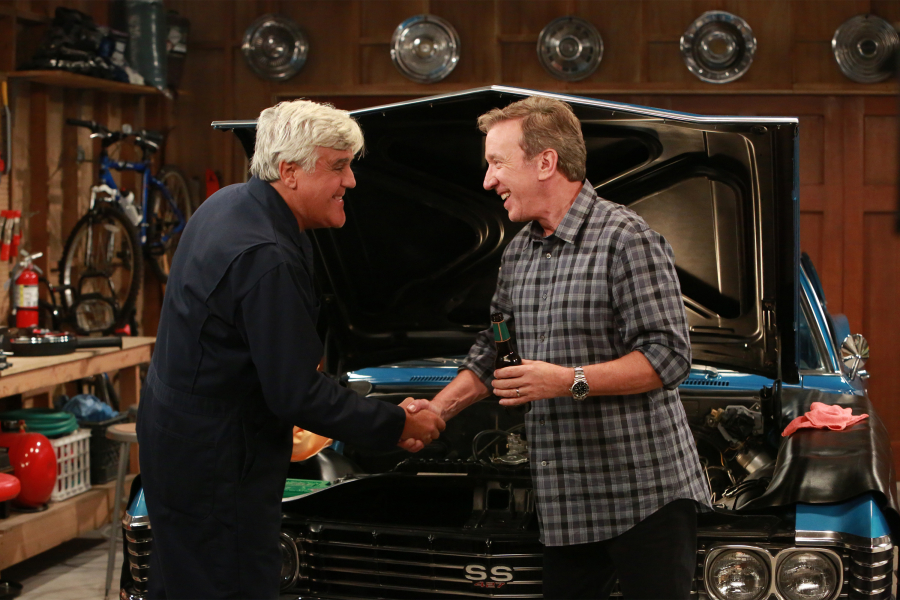 -Joe: You make online videos for a tent store. You're not exactly David Letterman, okay?

-Joe: And you know something? You're starting to bother me, too. Get the hell out of here.

-Mike: You know, if I'm not that nice a guy, I guess there's no reason to stop by my garage.

-Joe: Great, because watching you work on a car was torture. It was like having to sit through six of those "Santa Clause" movies.

-Mike: They made three of them. Everybody knows that.