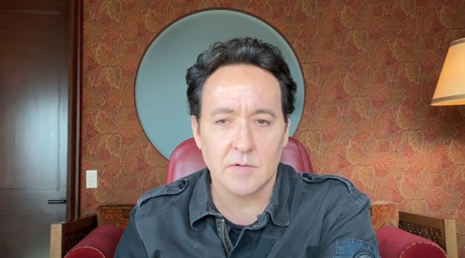 John Cusack is on yet another twitter rant, but what else is new? This time the actor and professional complainer is trashing "fucking awful" America. He is also attacking Boeing for “funding insurrectionist gop members” and creating ads showing support for our military. Of course the Hollywood jerk just spouts off, regardless of truth. He just loves attention (and hating on people).

The latest slew of ignorant tweets from Cusack begin with claims that Boeing is “giving money to anti democratic Fascists.” But in 2020, Boeing actually donated $123,186 more to Joe Biden it did to Donald Trump and it gave more than $500,000 to the Democratic PAC, senatorial campaign committee, and congressional campaign committee.

For someone who is constantly on his phone you’d think he knows how to do a quick google search. 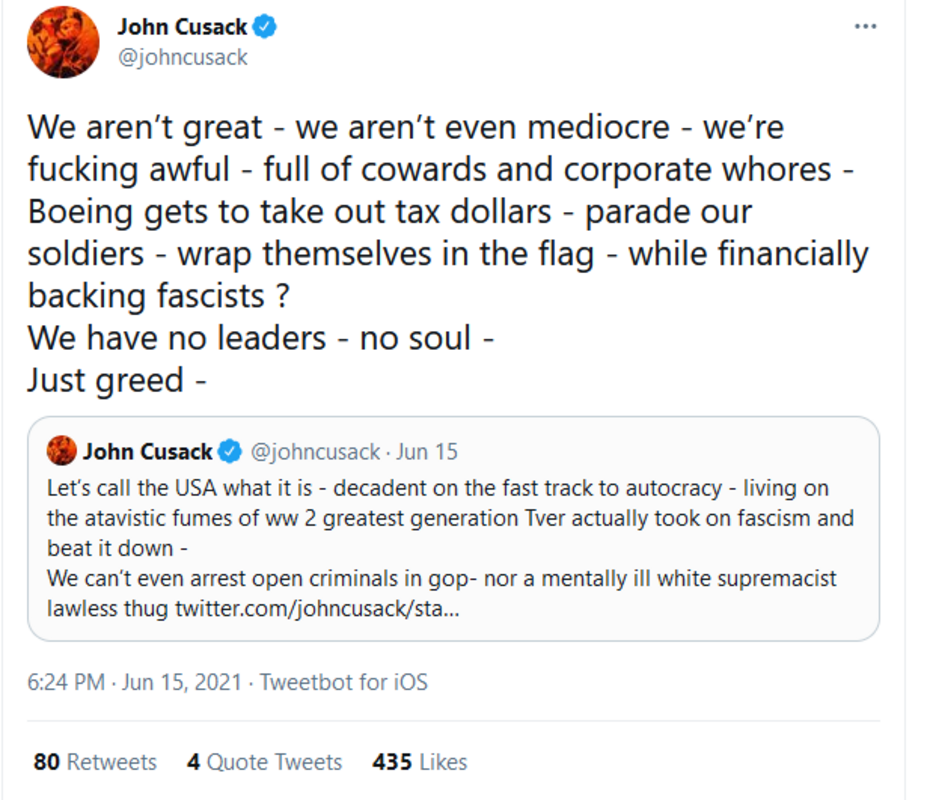 Unfortunately, the ignorance doesn't end there. Cusack then claims that Boeing is actively “denying the right to vote to [America's] black and brown service members.” Ignorance truly is bliss. On the other hand, he may know and just doesn't care. During the 2020 campaign, he announced he was blocking anyone who wasn't "aggressively anti-Trump" -- "family co workers - or friends." He's not open to debate or argument.

As if this wasn't enough mendaciousness for the night, he then attacks the company for playing an ad in support of our troops at a baseball game. Lets not forget that he has never served time overseas and does nothing but hate on America. But according to the "activist," Boeing cannot support U.S. troops and donate to the GOP at the same time because the Republican party is “anti-democratic.” Well, we do live in a democratic-republic, it's not a democracy no matter how many times he repeats that lie. He should really pick up a history textbook sometime.

Wasn't everything was supposed to get better if Biden was elected? At least that's what they were saying, especially the deranged Hollywood leftists like Cusack.

Funny how he actually has the right to say that while living here, I dare him to go to China and try saying the same thing. Seriously, get the hell out of here then if it's just so terrible. For someone who is so anti-free speech he sure enjoys his First Amendment right. Not when it's Trump using it though.

“Forcible suppression of opposition” is part of the definition of fascism, which sounds awfully similar to what Cusack has been supporting for years.