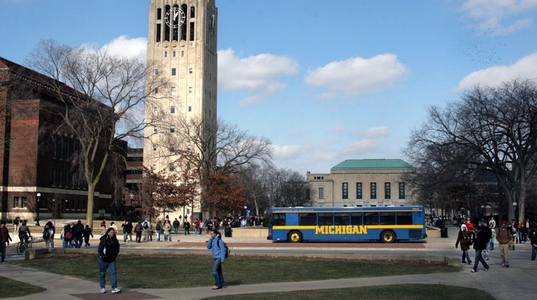 In case you missed it, censorship of ideas that do not adhere to liberal orthodoxy is happening at the University of Michigan. The PC police have struck once again. A Muslim student, Omar Mahmood, wrote a satirical piece titled "Do the Left Thing" for the conservative Michigan Review mocking social justice fads like trigger warnings and micro-aggressions, but also political correctness in general.

The satire teased the social justice folks by discussing the societal and institutional disadvantages of being left-handed:

He shouted after me, "I was just trying to do the right thing!"

The right thing. The right thing. I became so aware at that moment of the left hand that I had thrust out before falling, and suddenly my humanity was reduced to my handydnyss. The words rang in my eardrums, and my blood throbbed. This was the microaggression that broke the gender-neutral camel's back. But unlike other microaggressions, this one triggered a shift in my worldview. All this while, I had been obsessed only with the color on this campus. All of a sudden, though, that became a side issue. All those race-based microaggressions now seemed trivial. I had, I realized, forgotten to think intersectionally.

The biggest obstacle to equality today is our barbaric attitude toward people of left-handydnyss. It's a tragedy that I, a member of the left-handed community, had little to no idea of the atrocious persecution that we are dealt every day by institutions that are deeply embedded in society. So deeply embedded, and so ever-present, that we don't even notice them.

Pretty funny, right? Wrong. The piece was not acceptable to the establishment liberal paper on campus, the Michigan Daily.

Some Daily writers took offense to the satire, claiming it diminished their supposedly legitimate concerns about social justice. The Daily then found some obscure bylaws which forbid writers from working simultaneously at two papers without proper permission, and used this as cause for his termination.  Of course, this only became a problem after Mahmood wrote something they didn't like.

The social justice warriors at Michigan weren't satiated by his termination from the paper, however. Some individuals took to vandalizing his apartment, egging it and leaving him vile and profane messages.

The word is that the perpetrators of these crimes did not wonder if Mahmood would be offended by their actions. The irony must escape them that on their crusade against micro-aggressions - which could best be described as unintentional discrimination - these liberals felt the need to take aggressive and violent action against a fellow student.

This is just the latest example of `tolerant' liberals showing their intolerance to those with whom they disagree. Unsurprisingly, it appears like there was nothing on the story in the Detroit News or Free Press or the local affiliates. The only national attention is coming from conservative or libertarian media outlets like the Washington Times and Reason.com.