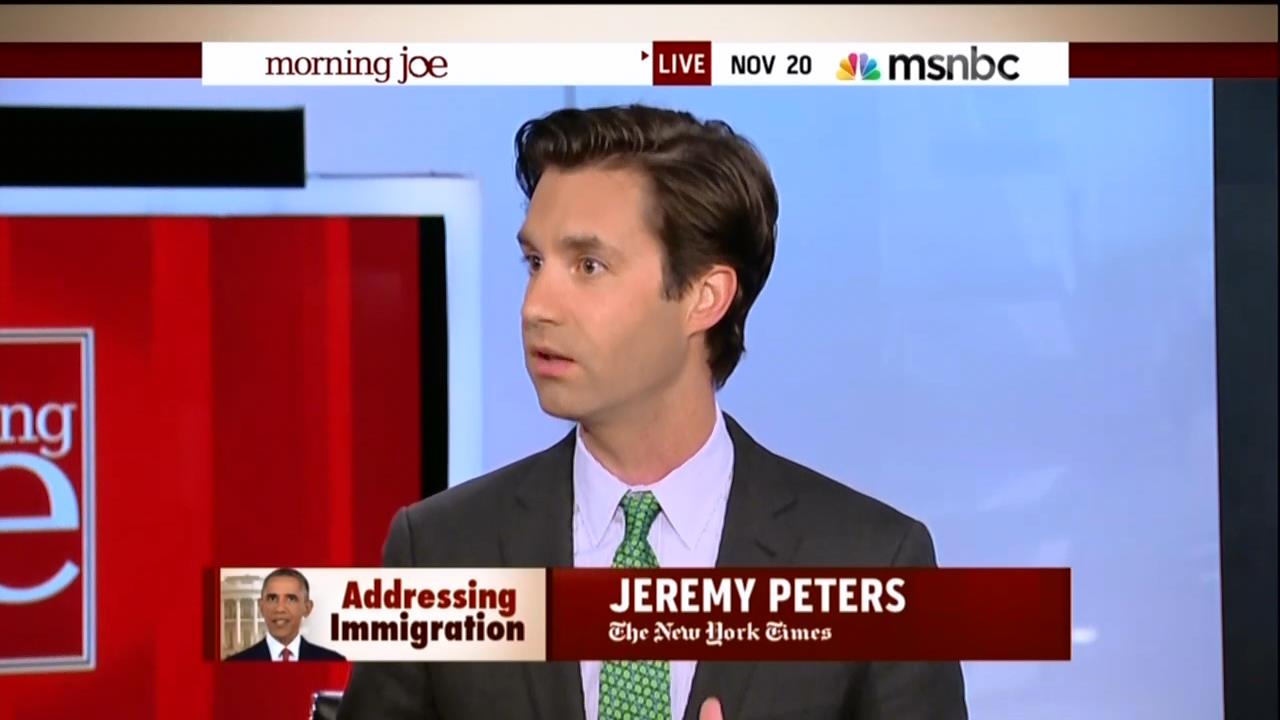 The New York Times' long-standing support for amnesty for illegal immigrants -- and its contempt for the Republican Party's continued opposition -- leaped out of Thursday's front-page story, "House Measure Defies Obama on Immigrants" by reporter Jeremy Peters, a reporter whose hostility to the GOP is well-documented.

The story's online blurb oozed sympathy for illegal immigrants: "Some Republican members deserted their party to vote against a bill denying safeguards for undocumented immigrants, including the young known as Dreamers." The Times has spent years gushing over the "Dreamers" -- immigrants brought to the United States as children.

Peters prevoiusly took on the Republican stance on illegal immigration last October, rooting for a backlash against the GOP's "harsh" "hardliners," and hoping for the party to take a more "charitable" view of illegal immigration.

Similar slanted word choice reigned over his piece Thursday on the Republican-dominated congressional vote reversing both Obama's extraconstitutional actions on amnesty for the "Dreamers" and his granting of work permits to four million other illegals.

The House voted on Wednesday to gut major provisions of President Obama’s immigration policy, approving legislation that would revoke legal protections for millions of unauthorized immigrants, including children, and put them at risk of deportation.

The vote drew condemnation from Democrats and the White House and led more than two dozen Republicans, many worried about the perception that the party is hostile to immigrants, to break away and vote no.

The most contentious measures in the bill are certain to die in the Senate, where Democrats have said they will wage a filibuster and some Republicans are likely to join in opposition. Mr. Obama has said he would not sign legislation that undermined the immigration changes he has carried out through executive action.

The House vote offered the first signs of how the new Republican-led Congress will navigate the bitter debate over the president’s directives, as well as evidence of emerging fissures in a party that has prided itself on nearly unanimous opposition to the president.

Yet, in just their second week of control on Capitol Hill, Republicans on Wednesday were forced to address questions about whether the party again would be hobbled by internal disagreements over immigration policy. And they were faced with an unwelcome distraction from their message of governing responsibly and cooperatively: explaining why the vote on Wednesday should not be seen as an insult to Hispanics, a constituency Republicans lost by more than two to one in the 2012 presidential election and have been trying to woo since.

By claiming the GOP said they weren't being "cruel," Peters obviously counted on his readers to think exactly that.

Republicans who supported the legislation said there was nothing cruel about their intentions. The debate was not about immigration, many of them insisted on Wednesday, but about a president who had exceeded his authority by rewriting immigration law without Congress’s consent.

Democrats accused Republicans of being callous to hard-working immigrants while jeopardizing the Homeland Security budget at a time when the country cannot afford to be caught off guard.

Peters, who is supposedly writing a front-page news story, not a front-page editorial, suggests the Republican proposals, which by reversing Obama's unilateral actions would turn back the clock all of two years, were "unforgiving" as well as "cruel."

Republicans who voted against the most unforgiving provisions said that while they believed the president had overstepped his authority, deporting children was a step too far.

“These children came to our country through no fault of their own,” said Representative Charlie Dent, Republican of Pennsylvania, who added he believed there was a measure of futility in the vote Wednesday, given the bill’s certain failure in the Senate. “I never know what the Senate is going to do. But I do know what they’re not going to do,” he said. “And I sure as hell know they’re not going to go for this bill as is.”

One disagreement Republicans will have to work out is how far they are willing to go to push legislation that has no chance of becoming law --because it dies either in the Senate or in a presidential veto. It is clear that some House Republicans want -- and expect -- the Senate to be as unyielding as they have been, though that is not likely. Asked how far he was willing to go, Representative Trent Franks of Arizona said, “All the way to where we fail to override.”

Peters talked of conservatives as a group he would never deign to talk to or try and understand:

But in a consequence that many conservatives would probably balk at, the agency within Homeland Security that is responsible for executing much of the president’s latest executive action, the Citizenship and Immigration Services, would still be able to pay its employees because it is funded through fees and not affected by appropriations from Congress.