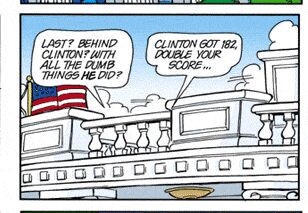 Obama's brain, on the other hand, contains "layers of complexity that I don’t think [Doonesbury's reporter character] Roland could possibly penetrate," according to Trudeau. The cartoonist's clear spite for the Bush family comes through, as he repeats a classless joke about the first President Bush.

Rutenberg skipped over how Trudeau's contempt for the second President Bush, George W. Bush (a classmate at Yale) led him to treat as true an obviously fake and partisan list of estimated presidential IQs that just happened to show Bush had the lowest IQ of any president.

Trudeau is also creator of the Amazon series "Alpha House," starring John Goodman and set on Capitol Hill. He said he devoted the show to Republicans because it was "juicy" to write about "mainstream conservatives who were elected in the pre-Ted Cruz era...taking fire from their right."

Rutenberg asked him about his notoriously hostile cartoons on Ronald Reagan: "Has the rise of the Tea Party softened your views of your old Doonesbury target Ronald Reagan?"

Trudeau: "I guess so. There’s one scene this season in which a Reagan impersonator visits a Republican retreat, and we have him say things that Reagan actually said, and the room starts booing him. Within 10 minutes dinner rolls are flying, because he’s cherry-picking these Reagan quotes that were dangerously reasonable."

The idea that Reagan was too reasonable for the present-day Republican Party would surely frighten liberals of that era, who smeared the president as a dangerous war-monger. And this sort of game can be played both ways. Here's a JFK quote you wouldn't hear from either party these days, talking about the fears reservists had of being called up to serve in Vietnam: "There is always inequity in life. Some men are killed in a war and some men are wounded, and some men never leave the country....It's very hard in military or personal life to assure complete equality. Life is unfair...''

Rutenberg issued a very mild challenge to Trudeau over his offensive Reagan strips: "Doonesbury was famous in the ’80s for the 'Reagan’s Brain' strips, in which a reporter, Roland, files dispatches from within the president’s damaged brain. Would you write them differently today?"

Trudeau was unapologetic: "I’m perhaps inordinately proud of them in my memory. The first series was thrown out of a lot of papers, because it was thought to be too strongly partisan just before an election. And who should ride to my rescue but The Wall Street Journal! Which has had nothing nice to say about me ever since, but at the time, it defended the strips."

Rutenberg: "What do you think is in Obama’s brain?"

Trudeau: "Oh, layers of complexity that I don’t think Roland could possibly penetrate. It wouldn’t occur to me to send one of my characters on a trek through it."

Asked why he doesn't dwell much on Obama in his strips of his show, Trudeau replied that the president was just too serious and his administration too clear in its intentions:

Trudeau: "I don’t know. The editorial cartoonists have been tied up in knots. They have no idea what to do with him. Maybe it’s a kind of blandness. There’s a seriousness about the administration; they don’t misspeak very often. There may be a general incoherence to the foreign policy, but that’s a very hard thing to wrap your arms around. Having said that, he doesn’t seem to be suffering from a shortage of critics."

No misspeaking in the Obama administration? Has Trudeau never heard of gaffe-master Joe Biden?

Trudeau termed the first President Bush as his most vocal opponent, "so abundant in his condemnations of the strip that he began to be asked about it, and then the more he was asked, the more he would talk. Editorial writers started to wonder why he was so disturbed by a comic strip."

Rutenberg set up Trudeau for another crack at the now 90-year old former president: "You had questioned his manhood, right?"

Trudeau: "I never questioned it. I said he had put it in a blind trust while he was vice president."

Rutenberg skipped over how Trudeau's contempt for the second President Bush, George W. Bush, led the so-sophisticated cartoonist in 2001 to fall for an obviously fake list of estimated presidential IQs from the non-existent "Lovenstein Institute" that just happened to show Bush had the lowest IQ of any president of the last 50 years, 91 compared to Bill Clinton's 182, conveniently making Democrat Clinton precisely twice as smart as his Republican successor. Trudeau's "apology" was typically graceless. (And when did liberals embrace IQ as an unbiased measure of intelligence anyway?)