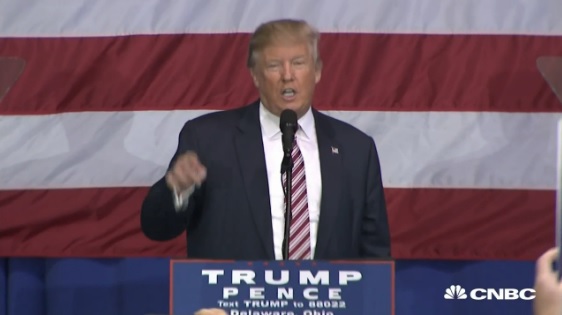 The liberal news media have been rabidly anti-Trump throughout the campaign. But that bias intensified as polling time neared.

The day before the U.S. election, Vanity Fair contributing editor Kurt Eichenwald launched a Twitterstorm of “top 129 findings from my investigation of Trump.” All but one of those tweets were negative toward the Republican presidential nominee and cited all manner of offenses from “deception” and “lies,” to destruction of documents, business failures and claims he “cheats at golf.”

Here are just a few of the long series of tweets:

“26. Unable to get bank loans because of his terrible record as a businessman, Trump began selling his name 4 use on other ppl’s projects.”

“31. In 1990, one of Trump’s lieutenants told me ““The thing you don’t understand about Donald Trump is that he’s mentally ill.”

“70. Trump has said he has been forced to use China to manufacture his clothing line because no one makes such things in USA. That’s a lie.”

“83. Trump reneged on a family-wide commitment to pay medical bills for his nephew’s severely sick baby because he was mad.”

Eichenwald began his spree of anti-Trump tweets Nov. 7, at 11:33 am when he announced he would tweet findings from six months of investigating Trump and spent the entire day (until 5:28 p.m.) publishing them.

He even hit back at those who would call him biased for it, yet his feed did not have a similar litany of offenses or “findings” of an investigation of Democratic nominee Hillary Clinton.

His series of tweets were very popular garnering thousands of retweets. Liberal Hollywood actor and environmental activist Mark Ruffalo retweeted at least 74 of them.

Many of the tweets contained claims that Trump lied, while others highlighted Trump’s failures as a businessman. For example, Eichenwald claimed, “I wrote about Trump 4 New York Times. First time we spoke, he lied to me in his first sentence. He told three more lies in 5 min call.”

On the morning of Election Day, Eichenwald continued to focus almost exclusively on information that made Trump look bad by recounting “a few statements said to me by people close to Trump ...”

Those 16 tweets included unnamed sources calling Trump “a clinical sociopath,” “the worst father” and “physically and mentally” abusive, and he is “a bad, bad guy.”

Eichenwald’s “bottom line,” was “ ... I have never found a real Trump friend or anyone who isn't paid by him who has anything nice to say about him.”