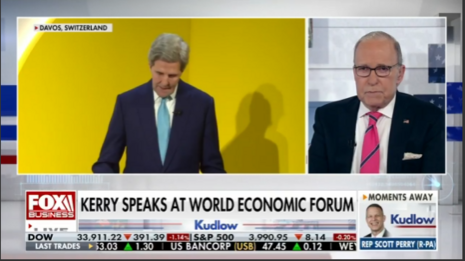 Kudlow ripped Kerry Tuesday for going after the so-called “robber barons” of Gilded Age America on his eponymous FBN show. Kerry lectured business CEOs on “failing to recognize the destructive process of growth, which he described as ‘not as enlightened growth but as robber baron growth,’” according to Kudlow.

Kerry was critical of the Fords and Edisons of 19th century America, whose very technologies set the nation up for success and benefited the working class, Kudlow argued.

Kudlow said, “It's bad enough that Kerry and Biden, and the rest of the climate extremists, are waging war against fossil fuels, their gasoline-powered cars and gas-powered stoves and over a million other nanny state, bureaucratic mandates that they are proposing, but attacking the robber barons — that for me is the last straw.”

The robber barons of America turned the nation into the economic success it is today, according to the Fox News contributor.

While the robber barons may get a bad rep from climate change activists, Kudlow highlighted the overlooked beneficiaries of these entrepreneurs.

“And who benefited the most? Working folks, Like Henry Ford's assembly line workers, who got big raises enabling them to purchase the new Model T cars. John Kerry will never understand any of this. These ‘robber barons’ made America the envy of the world, showing off the benefits of free-market capitalism.  Unrivaled prosperity came from the Gilded Age and its entrepreneurial leaders. It's the ‘robber barons’ who made America great.”

“Kerry talks about places like Nigeria and Uganda. These are places he thinks he has to save, but the reality is, people in those countries—and in poverty stricken Latin America and the less developed economies in Asia—all those four countries, they don't really care one whit about global warming or climate change,” Kudlow explained.

He went on to say that what these people care about is: “the need for growth, prosperity, jobs, technology, a better life. They care about moving up from poverty into the middle class and away from impoverishment. They would be thrilled to have energy of any kind, whether it's fossil fuels, or renewables, or nuclear, or whatever.”

These are the pain points that climate change-obsessed Kerry refuses to acknowledge. Instead, the Paris Accord architect keeps nagging governments and private sectors to pour more money into his save-the-earth mission.

Kudlow concluded, “If John Kerry would just keep his yap shut and just let today's entrepreneurs invent new technologies that will solve climate issues along with a variety of other problems, we'd all be in better shape.”