Did Idea for Biden’s Ministry of Truth Originate with a Soros-Funded Think Tank?

A 2020 report by a think tank funded by liberal billionaire George Soros raised questions about whether it had any hand in the creation of President Joe Biden’s “Ministry of Truth.” 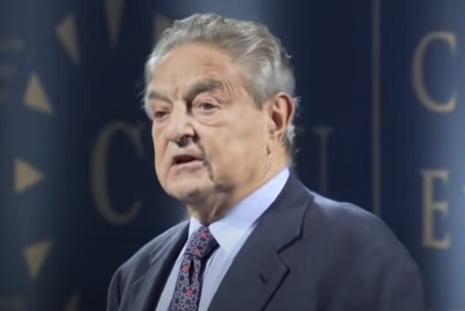 The Department of Homeland Security’s Disinformation Governance Board “may have originated from an under-the-radar think tank report that called on the department to change its focus,” Just the News reported.

The 2020 report, published by the establishment Atlantic Council, called on the DHS to begin “prioritizing ‘nonmilitary threats,’ such as white supremacism and disinformation,” according to Just the News’ article.

The report was headlined, “Future of DHS Project: Key Findings and Recommendations,” and specifically referred to “disinformation” as one of the primary “threats to American democracy itself.” Soros’ Open Society Foundations donated at least $518,085 to Atlantic Council between 2016 and 2019 alone.

Just the News stated that many of the proposals in the Atlantic Council’s report were “implemented by the Biden DHS.” The report’s authors, Scowcroft Middle East Security Initiative Acting Director Thomas Warrick and National Security Council Senior Director for Resilience and Response Caitlin Durkovich, both previously worked for DHS.

Durkovich’s Atlantic Council biography specifically mentions that she “served on the agency review team” for  DHS after Biden’s election. Warrick and Durkovich whined in their co-written report that there wasn’t any “effective” defense against what they described as “non-kinetic warfare,” including so-called “disinformation”:

While Americans understand that the Department of Defense (DoD) has the lead if there is a shooting war, today no department ‘owns’ the defense of the United States from non-kinetic cyberattacks against US businesses, state and local governments, or from manipulation of US-based social media platforms to amplify disinformation, or from other foreign efforts to sow division among the American people, [emphasis added.]

Former Deputy Assistant to President Trump John Zadrozny reportedly told Just the News that the apparent linkages between Atlantic Council and the DGB was “‘a reminder that the revolving door in Washington is very corrupt.’” He continued: “‘People from [previous administrations] working for the Atlantic Council and other organizations are churning out nonsense like this.'”

The DHS released a document in February 2022 titled, "National Terrorism Advisory Bulletin." The bulletin flailed: “The United States remains in a heightened threat environment fueled by several factors, including an online environment filled with false or misleading narratives and conspiracy theories, and other forms of mis- dis- and mal-information (MDM) introduced and/or amplified by foreign and domestic threat actors.”

DHS Secretary Alejandro Mayorkas announced the creation of the DGB only a few months after publication of the DHS document. The censorship board was led in part self-proclaimed “Mary Poppins of disinformation” Nina Jankowicz and Soros-tied DHS Principal Deputy General Counsel Jennifer Daskal, who was also revealed to be a Biden donor.

MRC Business reached out to the Atlantic Council for comment, which gave no response as of the publication of this article.

Conservatives are under attack. Contact your representatives and demand that Big Tech and Big Government be held to account to mirror and follow the First Amendment respectively while providing equal footing for conservatives. If you have been censored, contact us using CensorTrack’s contact form, and help us hold Big Tech accountable.