Was it part of multimillionaire CBS comedian Stephen Colbert’s routine to look like a complete hypocrite by lecturing people about the morals of paying higher gas prices? 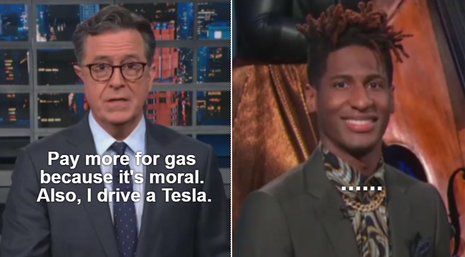 The Late Show host praised that the U.S. and European allies are finally considering banning imports of Russian oil. Of course, the consideration comes after President Joe Biden slapped more sanctions on American oil than Russian oil. Under Biden, the U.S. has reportedly imported “more than half a million barrels per day (BPD) of oil from Russia,” making Russia the U.S.’s third largest oil supplier.

Colbert conceded that gas prices have hit $4 a gallon, but then claimed: “A clean conscience is worth a buck or two.” He continued his nonsense with a facetious twist: “I’m willing to pay $4 a gallon. Hell, I'll pay $15 a gallon because I drive a Tesla.”

Pontificating about the virtue of paying high gas prices while driving an electric vehicle is blatant hypocrisy, and so is the fact that the show host also enjoys a $75 million net worth.

Colbert definitely put his foot in his mouth.

Colbert called the sanctions placed on Russia “crippling,” which is also misleading. Coventry University professor and international law scholar Nathanael Tilahun told British newspaper Metro that he doubts “‘sanctions have had any impact so far on the Russian government.’” He continued: “‘We think all of these sanctions are simply going to affect the government – no, the government will be fine. The impact will be on ordinary people.’” 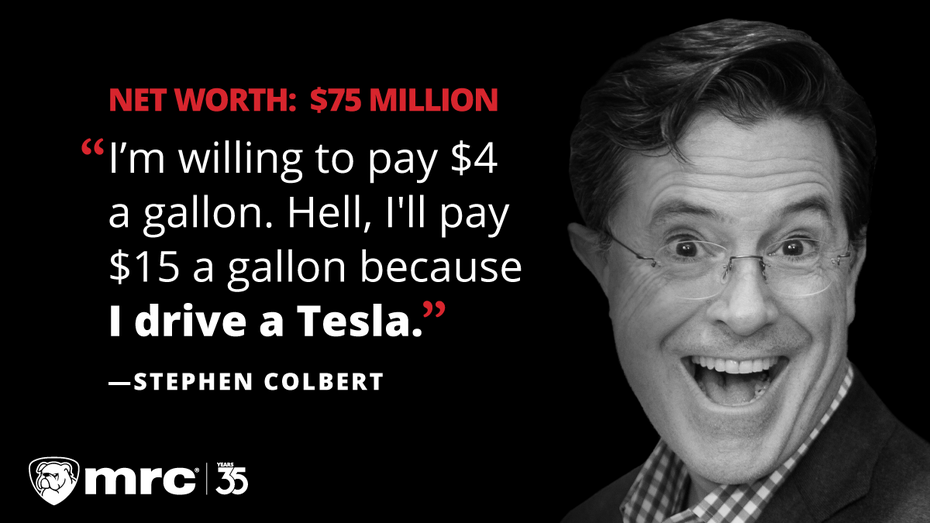 Conservative radio host Mark Levin played a recording of Rep. Brad Sherman (D-CA) during a segment on MSNBC where he threw cold water on Biden’s weak-kneed economic sanctions against Putin: “These sanctions are actually rather modest compared to what we did to Iran back in 2014.” Apparently these facts were lost on Colbert.

The Biden administration is reportedly set to ban Russian oil imports while reportedly exploring a potential shifting of the U.S.’s energy reliance to the tyrannical regimes in Saudi Arabia, Venezuela and Iran. Apparently keeping the U.S. dependent on foreign oil was preferable to taking Biden’s handcuffs off U.S. energy production at home. The Wall Street Journal Editorial Board slammed the Biden for stifling U.S. energy in the face of the ongoing war between Ukraine and Russia:

[Biden] has suspended leases in Alaska’s Arctic National Wildlife Refuge, halted oil and gas leases on federal land, and killed the Keystone XL pipeline, which would have helped Canada develop its oil sands.

OilPrice.com also noted that canceling the Keystone XL pipeline was a “bad policy decision” because it could have given the U.S. a strategic advantage over Russia:

In the real world – without all of the delays that have gone on for years — [Keystone] could have been completed by now (or at least close to it). It could have been displacing oil from places like Russia.

Conservatives are under attack. Contact CBS and demand Colbert stop his hypocrisy lecturing the American people about the morals of paying higher gas prices.