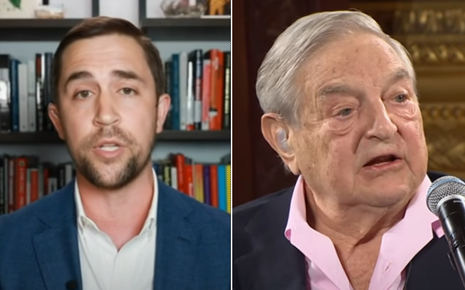 The Philadelphia Fed’s website has a page for its 2021 "Reinventing Our Communities (ROC) Cohort Program,” which was allegedly engineered to help businesses “explore structural racism impacting small businesses owned by people of color in their community and plan for a more equitable recovery.”

The page links out to a leftist group called Race Forward to highlight its resources on “Racial Equity Tools.” One of the “tools” provided by Race Forward included its “#BannedWords Campaign.”

The “campaign” included a 10-page document that offered a how-to guide on fighting critical race theory opponents. The document, which read like a racially charged variant of the Communist Manifesto, attacked Rufo: “Essential conversations about race in America are being hijacked and curtailed by broad narrative attacks launched by Christopher Rufo, Senior Fellow at the Manhattan Institute.” Liberal billionaire George Soros’s Open Society Foundations gave Race Forward at least $1,445,000 between 2017-2019.

Fox Business reports that the Federal Reserve Bank of Philadelphia circulated a document with strategies to attack, undermine, and silence my work.

My message to the Fed, FBI, DOJ: I will fight you inch by inch until we abolish critical race theory from public life. Game on. pic.twitter.com/Cw0D9B4gEF

The document continued spewing bile at Rufo, making the Philadelphia Fed’s promotion of the group all the more egregious: “The attacks by Rufo and other critics, pundits, and politicians who have joined the effort are shutting down critical racial equity work and conversations in institutions across the country—primarily schools, universities, and government—and are extending further into our society.”

Even more outrageous was Race Forward’s attempt to spin Rufo’s research as an attack on democracy:

This attack on critical race theory is part of a broad, coordinated effort to thwart a multiracial democracy.

Apparently, Race Forward may have missed civics class: America is a multiracial republic, not a democracy.

Fox Business highlighted a video by the Philadelphia Fed which reportedly accuses the U.S. of harboring systemic racism:

On Oct. 6, it posted a ‘racial equity training’ on its YouTube page in which speakers extol ‘anti-racist values’ and attack ‘race-neutral policies.’ ‘Racism is really built into our system and it's built in there so strongly that race-neutral policies uphold racism,’ Jenn Steinfeld of the National League of Cities says on the training. ‘And I think that's really hard for a lot of policymakers to get that if we keep doing the same thing that we are upholding the racist system. So if you really want to address equity it has to be at the heart of your program.’

A Philadelphia Fed spokesperson reportedly tried to hedge its promotion of Race Forward to Fox Business by claiming the institution “‘takes no position on critical race theory,’” despite the fact that it explicitly promoted materials endorsing critical race theory.