Editor's Note, 4:58 p.m. Eastern: According to FEC records, there is another Sara Murray in Washington D.C. at the same zip code whose occupation is a nutritionist. Prior to this post's publication, MRC reached out to several CNN officials for comment. All of them went unreturned. Since publication, CNN has informed NewsBusters that both CNN and Murray unequivocally deny that she's made any political donations and are looking into the donation’s origins. The Mark Kelly campaign sent a note to the FEC stating:

"This filing is to notify that on the October 2020 Quarterly report we incorrectly reported Sara Murray's occupation as Correspondent and employer as CNN. The correct information, as given by the donor who made the contribution on September 19, 2020, is that their employer and occupation are both Not Employed."

Our report on the donation record was accurate, but the FEC record was not, so we're happy to correct it. The original story appears below. 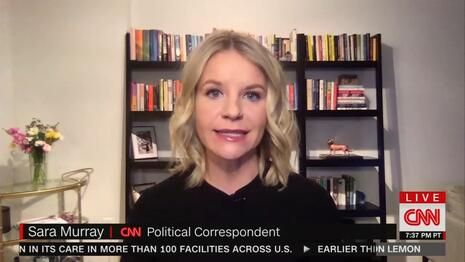 This is the same Murray who gushed over Trump’s niece’s anti-Trump book in a July segment of CNN’s New Day: “She [Mary Trump] basically [said] Fred Trump, the patriarch of this family, her grandfather, Donald Trump’s father, really created this toxic environment that led Donald Trump to become a liar, and a cheater, and a sociopath.” Giving a thousand bucks to a Democrat certainly provides context as to why a news correspondent would push such biased reporting against the president. [Emphasis added.]

During another July segment of CNN’s New Day, Murray recycled Mary Trump’s unverified claims about her uncle: “But when it comes to the President, Mary Trump essentially described Donald Trump as a sociopath.” 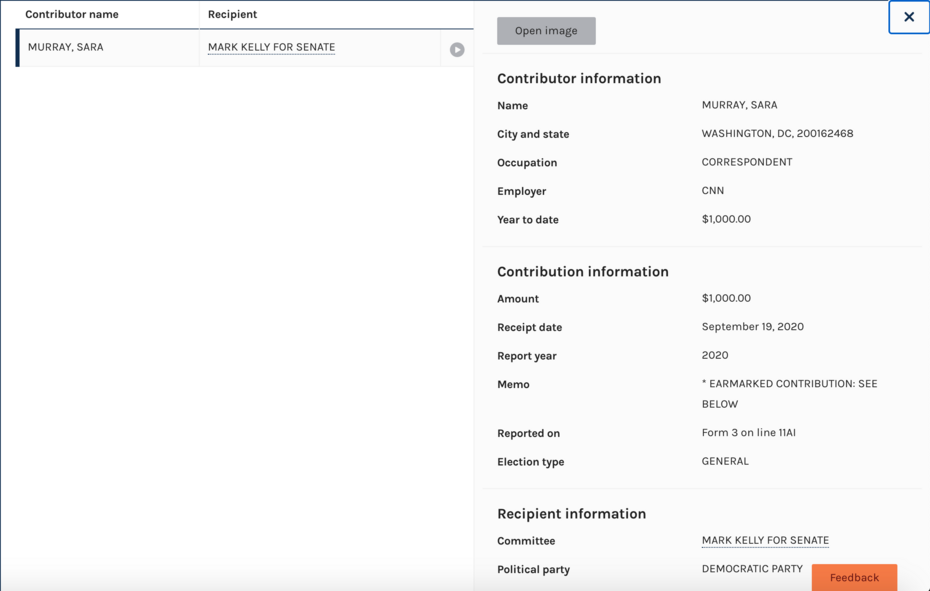 The Society of Professional Journalists Code of Ethics clearly states that journalists should “[a]void conflicts of interest, real or perceived. Disclose unavoidable conflicts.” It also states that journalists should refuse credibility-harming “special treatment” and should “[a]void political and other outside activities that may compromise integrity or impartiality, or may damage credibility.”

These general rules to protect journalist impartiality are clearly lost on CNN.

Murray’s bias does not stop with Trump, however. She also has a history of saying outlandish things against others in the GOP too.

When then-Republican presidential candidate Bobby Jindal announced his candidacy for president in 2015, Murray spewed on CNN Newsroom that some of Jindal's pitch was aimed at GOP "core" members who want immigrants to "act like every other white person in America." [Emphasis added.]

Murray is not the only CNN personality to be found donating to Democrats.

A report released this year showed that insufferable CNN-labeled “Republican strategist” Ana Navarro-Cárdenas had contributed at least $250.00 to former Vice President Joe Biden’s campaign in February. She had also donated cash to Sen. Kamala Harris’s (D-CA) failed presidential campaign. Navarro is still labeled by CNN as a “Republican strategist” to this day.

MRC Business reached out to CNN for comment on Murray’s political donations with a 12:00 p.m. December 22, 2020 deadline, but has received no response as of the publication of this article.

Conservatives are under attack. Contact CNN at 1-(404)-827-1500 and demand they disclose any conflicts of interests its staff has with Democratic candidates.