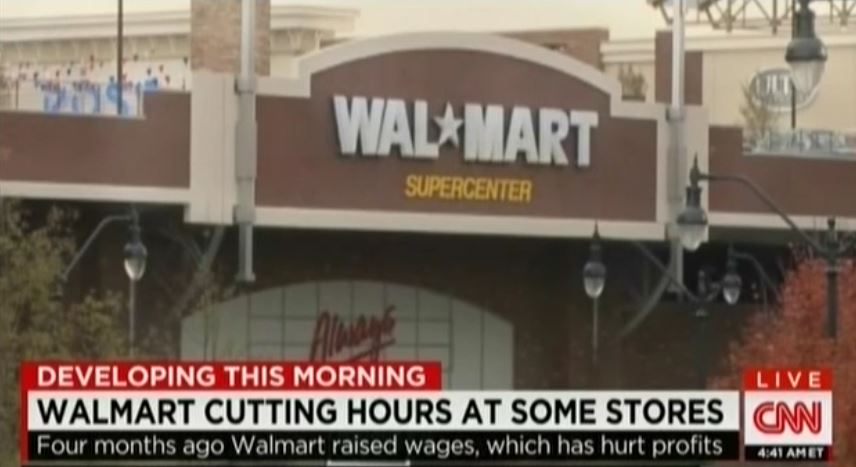 Just before Labor Day, Wal-Mart taught a lesson in Economics 101.

The consequences of Wal-Mart’s decision to raise employee wages are becoming apparent and even the wage-hike promoting liberal news media has had to report it.

Bloomberg Businessweek reported that Wal-Mart’s labor costs had soared by $1 billion after raising hourly wages to $9 in April and committing to additional training. In order to deal with those soaring costs, the company has had to cut employees’ hours.

She claimed the move will not impact most of the company’s employees, but “only in locations where managers have overscheduled workers.”

“Of Course Walmart Cut Hours After Raising Pay--What Did You Expect?” Worstall wrote. He also said Wal-Mart’s move was not “some oddity” or “some unexpected glitch.”

“Raise the wages in order to get more productive staff and the very point and purpose of what you’re doing is to reduce the number of labor hours you must purchase,” wrote Worstall.

Those in the liberal news media who called for a higher minimum wage (even as high as $15-an-hour) may find that lesson tough to take.

CNN Early Start co-host Christine Romans admitted on Sept. 1, that raising wages was a “bit of a drag on profits” for Wal-Mart. However, she noted that “some of the unions, some of the critics of Wal-Mart have been saying, ‘Hey, you know, don’t cut hours just because you’re paying more in labor costs for some of these folks.’”

CNN has a history of bashing Wal-Mart and pushing for a higher minimum wage. CNN Newsroom host Carol Costello went easy on fast food workers striking for $15-per-hour while grilling an industry executive about whether these workers should “make more money” on Aug. 29, 2013.

On Sept. 13, 2013, Costello badgered a retail industry executive after the mayor of Washington, D.C., vetoed a bill that would force Walmart to pay employees $12.50-per-hour at proposed stores in the city. “Walmart’s going to make a whole bunch of money by doing this, that's why it's moving into the D.C. area. So why not share the profits with others,” Costello asked.

In addition to CNN, other outlets including ABC, PBS, The Washington Post and USA Today celebrated the 13.5 percent increase in the federal minimum wage in 2007, even though a majority of the American Economic Association’s members warned at the time that such a move would “lead to employment losses,” especially among the nation’s poor.