The Fed’s projection for 2022 is currently 4.3 percent, but the Fed brazenly predicted inflation to precipitously drop down to 2.7 percent in 2023 and 2.3 percent in 2024, according to CNBC.“I think it would be charitable to label it a hope, rather than a dream, and absurd to suggest that it is a likely prospect, uh, on the current policy path,” Summers said.

Summers also claimed that tariff reduction could shrink inflation by as much as 1 percent. Even one percentage point could mean tremendous relief for regular Americans suffering 7.9 percent inflation as of March.

PIIE President Adam Posen, however, absurdly interjected the Jan. 6 Capitol riot into his commentary on the divisive nature of inflationary pressure on a society “[H]igh inflation can be politically destabilizing,” he explained, and it’s especially concerning because “we live in a context where the shadow of January 6 last year, uh, remains with us.”

The inflation rate during the 2021 Capitol Hill riot was 1.4 percent, compared to 7.9 percent in February 2022, according to US Inflation Calculator. Posen did not explain how or why 1.4 percent inflation in January 2021 was so “politically destabilizing” that it had anything to do with the events of January 6, 2021.

Posen did, however, also rebuke the Fed for failing to recognize that inflation was not “transitory.” 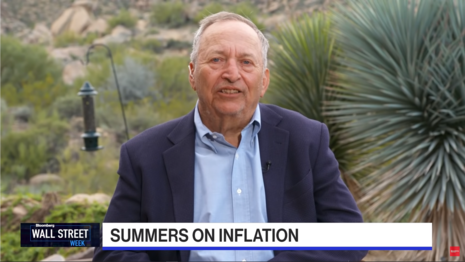 Summers echoed Posen’s point about the Fed missing the mark by clarifying the seriousness of the current inflation crisis. “[I]nflation is a very substantial issue for the United States,” he emphasized. “Anyone who doubts that inflation is important, should ponder that it brought Ronald Reagan, Richard Nixon and Margaret Thatcher to, uh, power.”

This is not the first time that Summers has chided Biden for making excuses on the economy. The former Treasury Secretary also previously made headlines when he lambasted the Biden administration for blaming soaring inflation on Russia’s invasion of Ukraine and price-gouging by supposedly greedy companies. CNN also reported that Summers warned Biden in May 2021 that too much COVID-19 stimulus funding risked overheating the economy and worsening inflation.