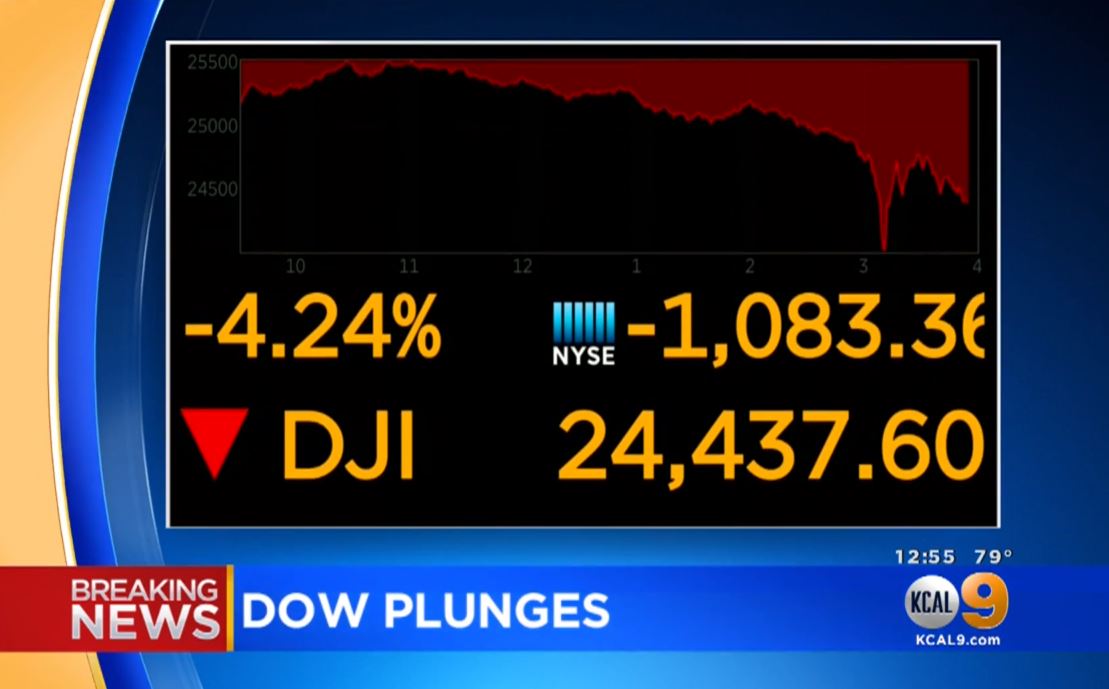 The Dow Jones Industrial Average gained more than 5,000 points in a single year for the first time ever in 2017, but liberal journalists and celebs lost sight of those gains when a market pullback took place in early February. They quickly freaked out.

Multiple liberal outlets and journalists pounced on the news, coming up with uniquely negative, hyperbolic ways to cherry-pick the data, using descriptors like “crash,” “recession,” “plunge” and “free fall.”

CNN Money hyped the Feb. 5, “worst point decline in history” — of more than 1,100 points — as “the scariest day on Wall Street in years.” Only later CNN Money senior writer Matt Egan admitted that the drop “amounted to 4.6%” (decline from the day before). He failed to point out that the only reason the fall was “historical” was because of the enormous growth that preceded it.

Other left-wing journalists like ShareBlue senior writer Oliver Willis and GQ Magazine columnist Joshua Rivera saw the drop as a clear proof of a coming “recession” or “slump.”

Remember when it dropped 500 points in one day and that’s how we found out we were in a recession https://t.co/v3L4Z0ZR4d

Welcome to the Trump recession, and congrats to all the investors who spent the past year ignoring every single glaringly obvious risk because they were giddy about tax cuts. https://t.co/0H3TTudiDY

The media headlines were so bad, Poynter Institute scolded journalists over their “hyperventilated fear.” Even the liberal, New York Times published an “Upshot” blog calling out “dire” headlines and urging people to take a long view, remember context and beware of “distorted” perceptions.

After more than a year of record-setting growth, The Dow Jones Industrial Average endured a 4.6 percent drop on Monday Feb. 5. In raw numbers it was a drop of more than 1,100 points and the largest point loss in Dow history. But in percentage, it was much less significant. The drop also followed a smaller 2.5 percent drop Friday, Feb. 2.

Rather than provide a long view and quell fears, some media focused solely on the impact on 2018 gains (after years of a bull market).

Both the Los Angeles Times and DailyBeast columnist Dean Obeidallah framed the dip as destroying all of 2018’s gains.

Today's stock market crash wiped out all the Down Jones gains for 2018. What's scary is if we hit an economic slow down is that the failed businessman Trump has no idea how to save us-he can't file for bankruptcy. So he will instead scapegoat immigrants, Muslims, etc

While technically true, their choice ignored that the Dow’s Feb. 5, close was still higher than the record high set roughly two months earlier on Dec. 8, 2017. They also omitted the point that on Feb. 5, even after the big drop — the Dow closed more than 4,000 points higher than the highest Dow record at that time a year earlier.

Other journalists and outlets incorrectly described the 4.6 percent drop as a “crash.” In technical terms, a drop only qualifies as a crash “when a stock index loses more than 10 percent in a day or two,” according to The Balance.

Yet, headlines from both Express UK and left-leaning Vox used the “crash” label without even mentioning points and percentages. The Street also labeled the fall a “crash.” BuzzFeed misleadingly tweeted about the “historic Dow decline” while HuffPost ran a Reuters’ story under the headline, “Dow Plunges Nearly 1,600 Points In Biggest Intraday Point Drop In History.” The focus on “intraday” exaggerated the extent of the drop by making it sound even worse.

Russia, Russia, Russia. Oh yeah. And the stock market crashed on Friday partly because of political unease over your reckless war on justice. #Collusion https://t.co/D0EWoydls3

The Trump Stock Market crash continues as he continues to whine about how great he is doing.

Like Israel, several celebrities took aim at President Donald Trump, while ignoring the record-setting growth since his election.

Author Stephen King also blamed the drop on “Trump-onomics,” while actor John Cusack insinuated it would be “good” if the drop were based on fear of the president.

Stocks down 1,000 points just today. Another victory for Trump-onomics.

Hyperbole ran rampant as Washington Post reporters described the drop as a “free fall” and declared “Trump has presided over the biggest stock market drop in U.S. history, when measured by points in the Dow Jones industrial average.” Nowhere in that story, did the Post acknowledge he also presided over the largest annual Dow point growth.

“[T]he stock market has risen so fast in the past few years that the points are not as important as the percentage,” Tomkins explained. News stories focused primarily or exclusively on the points, not percentage, were not telling the whole story.

Fortune had several different takes on the drop. While one Feb. 6, story warned readers, “Don’t Call it a Stock Market Crash,” a reprint of a Bloomberg story the day before included a headline touting the “Biggest One-Day Selloff Ever.”

“Market crashes are generally defined by an abrupt and rapid decline of 20% or more,” Fortune said, therefore the Feb. 5, dip was “not a market crash, or even remotely close.”

Market Watch financial analyst Mark Hulbert also called the drop a “plunge” on Feb. 6, but insisted “[e]ven if the bull market has come to an end and a bear market has begun, the data do not justify a claim that the market was in a bubble that has now burst.”

NPR Morning Edition Producer David Blanchard tweeted out the distinction between the raw point drop and the percentage drop:

Some context for those claims that this is the largest single-day drop for the Dow in its history. That's true in terms of raw points (1,579 today). But in terms of percentage drop (4.6 percent), there were many days during the recession that were worse than this.