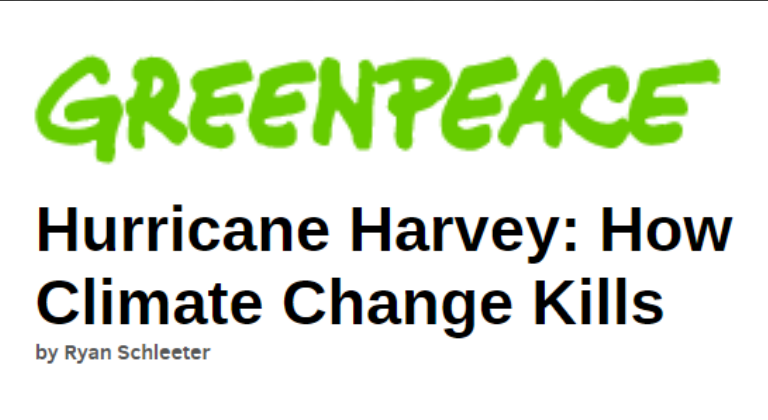 Left-wing environmental groups peddle global warming alarmism all the time, especially during major hurricane devastation. Turns out those same green groups saw a lot of the other kind of green in the past two years -- $341 million in donations to just seven organizations.

Groups including the Natural Resources Defense Council, Democracy Now! And Union of Concerned Scientists, which get big bucks from billionaires like George Soros and the Rockefellers, all tried to link Hurricanes Harvey and Irma to manmade climate change from carbon dioxide and “fossil fuels.”

The National Oceanic and Atmospheric Administration (NOAA), the very agency that monitors and forecasts hurricanes, said on its website “it is premature” to link hurricane intensity to climate change. That didn’t stop those liberal nonprofits from declaring there was a connection.

During Harvey and Irma, the Environmental Defense Fund, Natural Resources Defense Council, Earthjustice, Union of Concerned Scientists, Greenpeace, 350.org and Democracy now! made sweeping assertions about climate change, including “climate change made Hurricane Harvey more deadly” and fossil fuel use “supercharges” hurricanes. 350.org even advocated creating a new Category 6 for “super storms that are emerging in our changed climate.” 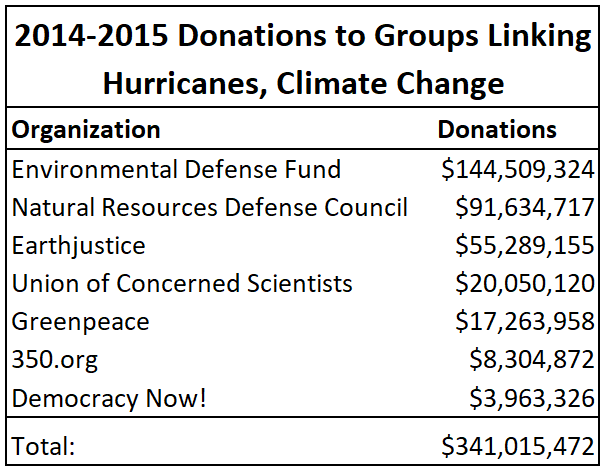 These groups were able to promote their alarmist messages to a wide audience because they are backed by millions of dollars from powerful donors. The seven groups received at least $341,015,472 in donations in 2014 and 2015 alone.

“While we cannot say definitively that climate change caused Hurricane Harvey, science tells us with confidence that it has increased the impact of the flooding and heightened the intensity of the storm,” Greenpeace blog editor Ryan Schleeter wrote.

The science is clear. Climate change made #Harvey unlike any other weather event in history. We must #ActOnClimate. pic.twitter.com/tyyWxHvEBD

“The fact is, it’s insensitive to deny climate reality right when people are being so badly hurt by the impacts of it. It’s like telling people to shut up about germs during a flu epidemic,” Gaby wrote.

“As horrible as Harvey was — and as Irma is shaping up to be — recognizing the role climate change is playing in this year’s superstorms must help guide recovery and resiliency efforts,” ThinkProgress claimed on Sept. 7.

CAP received more than $39.8 million in 2014 and 2015, but donation records did not reveal how much of was directed to ThinkProgress.

Two days before Irma struck the Keys, the “largest nonprofit environmental law organization” EarthJustice encouraged readers to donate specifically to its “partners on the frontlines,” rather than encouraging donations to neutral relief organizations.

“Right now, millions of people are feeling the effects of the massive storms, flooding and fires of the last few weeks—painful reminders that climate change is real and is already wreaking destruction on communities around the world,” EarthJustice’s Vice President of Development Mollie Fager wrote.

“As we’ve seen time and again, those who pay the ultimate price for climate inaction are not the people driving this crisis. They are not the CEOs overseeing the reckless burning of fossil fuels, which supercharges storms like Hurricanes Harvey and Irma,” NRDC said on Sept.8. “The people who have always suffered the most from environmental disasters are Black, Brown, poor, and the least resourced to cope with a climate changed world.”

Between Harvey and Irma, Union of Concerned Scientists (UCS) published a blog asking “What’s the Connection Between Climate Change and Hurricane Harvey?” It then cited warmer ocean temperatures and sea level rise which it said was caused by climate change.

On Twitter, UCS said the media “must make connection” between climate change and hurricanes.

Scientists and meteorologists understand the #climate connection to hurricanes - Media must make connection too #ClimateSilence pic.twitter.com/4CMAvHtUm6

350.org went beyond writing blog posts linking climate change to hurricanes. It created a petition to “tell your members of Congress: Harvey is a climate change disaster.”

It also shared fearmongering memes on Twitter including asking if Hurricane Irma was “the new normal” and proposing “Cat 6” for “the new super storms that are emerging in our changed climate.”

Of course, that was absurd since there were horrific, intense and deadly major hurricanes in 1900 and 1935 and many more even earlier. Galveston, Texas was decimated in 1900 by a hurricane with winds between 130 and 140 miles per hour (Category 4) and a 15 foot storm surge.

That reality didn’t stop Democracy Now! Host Amy Goodman from encouraging McKibben to slam fossil fuels by asking “what does the whole fossil fuel industry have to do with the kind of severe weather we’re experiencing now around the world?”

McKibben accused the fossil fuel industry of “unreason” and “its inability to deal with the fact that its business model has to change.”