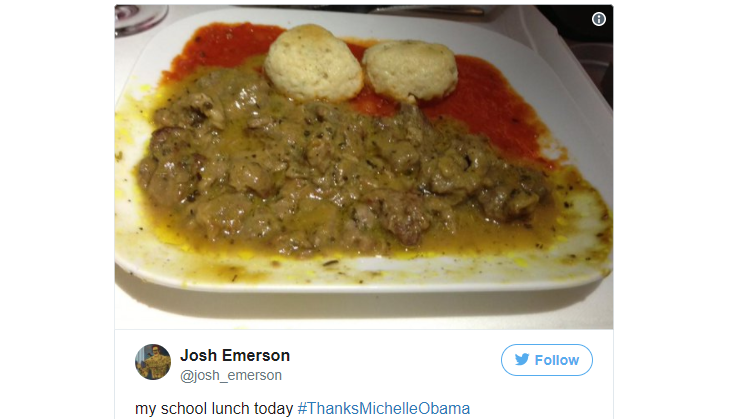 It turns out parents aren’t the only people who struggle to get kids to eat their veggies.

A multi-million dollar government effort to make school children eat healthier hasn’t worked, according to The Washington Post. But The Post left out one important detail: the Obama administration and First Lady Michelle Obama promoted the program. It was even part of her “Let’s Move!” program.

“The Department of Agriculture has invested seven years and several million dollars in a popular program that claims it gets students to eat significantly more fruits and vegetables,” The Post reported Aug. 24. “But as a recent critique of the research behind the program reveals, ‘significantly more’ often means an amount as small as a single bite of an apple.”

During the Obama presidency, the media repeatedly celebrated the Obamas’ lunch regulations, claiming they’d make school lunches “better” than what even parents provided. At the same time, students shared photos mocking their small, mysterious portions with the hashtag #ThanksMichelleObama.

The Post reported that the Smarter Lunchrooms Movement developers at Cornell University manipulated data to make the program appear successful. For example, they described a single bite of an apple as a “significant” increase in healthy food consumption. They also counted how many vegetables students put on their plate in a lunch line, instead of how many students actually ate.

The Post based its reporting on an Aug. 10, critique by University of Liverpool behavioral scientist Eric Robinson.

However, the newspaper failed to remind readers of the big name support for the Smarter Lunchrooms Program. First Lady Michelle Obama embraced the lunchroom plan as part of her Let’s Move! Initiative.

The Smarter Lunchrooms Movement program was developed in 2010 by Cornell University researchers. After being implemented in schools, the United States Department of Agriculture (USDA) supported it with at least $5.5 million in grants.

“These grants are another way USDA is combating child hunger and obesity and improving the health and nutrition of the nation’s children,” the USDA said, “an important component of First Lady Michelle Obama’s Let’s Move! Initiative to combat childhood obesity.”

The Smarter Lunchrooms website claimed to offer “no-cost or low-cost strategies that lunchrooms can use to increase participation, improve consumption of healthy food, and reduce food waste.” The “low-cost” description clearly means the cost to schools, not the federal government (and in turn, taxpayers).

Despite the criticism and lack of results, The Post reported “there is no plan to remove Smarter Lunchrooms from schools.”

Other media outlets were less willing to question Obama-era lunchroom policies. In March 2017, CNN wondered whether Obama’s lunch programs were “in jeopardy” because of President Donald Trump.

According to CNN reporter Betsy Klein, the consequences would be “tastier, less healthy school lunches -- more salt, less quinoa.” Klein failed to ask whether students ate the quinoa in the first place.

Other outlets like USA Today and CBS News hyped Mrs. Obama’s May 2017 statements criticizing Trump for rolling back her restrictive lunch regulations.

"You have to stop and think, 'Why don't you want our kids to have good food at school? What is wrong with you and why is that a partisan issue? Why would that be political?" Obama said.

CBS This Morning co-anchor Gayle King said “I will never understand the downside to encouraging people to eat healthy,” in May 2014. On NBC, Nightly News downplayed regulation critics as being “backed by Republicans and pushed by the food industry.”

ABC Good Morning America hyped Obama’s regulations as forcing schools to provide lunches that “may be better than the ones parents pack for their kids.”

But once it was obvious regulations failed to force feed fruits and vegetables to children, or were controversial, outlets including ABC and the Associated Press refused to mention the First Lady.