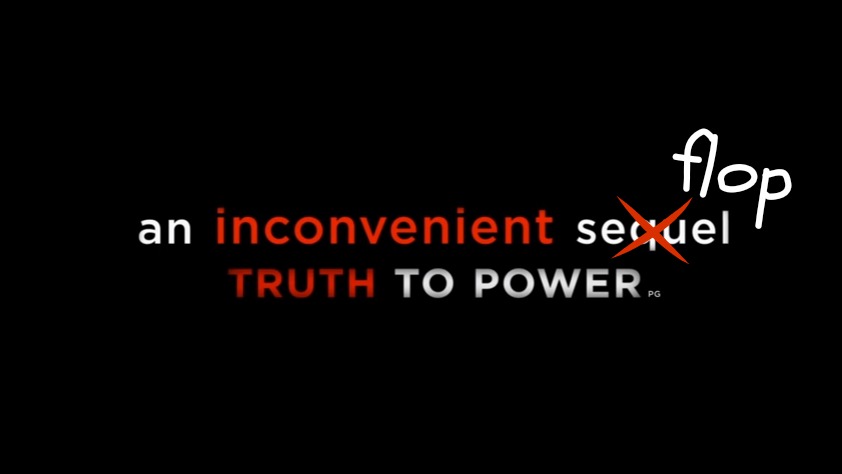 Climate alarmist Al Gore’s second film, An Inconvenient Sequel, failed to heat up the box-office, falling from 16th to 18th over the Aug. 11-13 weekend.

It’s a dramatic fall from glory for the climate alarmist whose first film, An Inconvenient Truth, won several awards including an Oscar and grossed $24 million.

An Inconvenient Sequel, meanwhile, grossed just under $2.3 million in the U.S. since its Aug. 4 release. Worse, after two full weekends at theaters nationwide Gore’s film ranked lower than panned sci-fi flick Valerian and the City of a Thousand Planets. Both Entertainment Weekly and Vanity Fair dubbed Valerian a “mess.” Rotten Tomatoes shows a 57 percent audience approval rating for Valerian compared to An Inconvenient Sequel’s 47 percent.

The film’s poor performance was especially humorous because of Viacom used many platforms to promote the film and the liberal media heaped praise on Gore prior to its release.

Almost all of the networks’ coverage of Gore’s network followed the same pattern. Between Jan. 1, 2011, and July 25, 2017, more than 87 percent of non-political stories about Gore (51 of 58 stories) ignored criticism of his climate change activism or claims.

The stories failed to mention that the first film’s carbon footprint has yet to be offset despite Gore’s promise he paid to make up for the carbon generated during its production. Coverage since Sequel was released also ignored that Gore significantly rewrote a prediction from An Inconvenient Truth in order to claim that his 2006 film had been correct.

Media corporation Viacom pushed the film onto its 700 million subscribers with “An Inconvenient Week” starting July 31, with many of its networks promoting the film. Its support for Gore’s film included an MTV town hall event with the former politician.Two days before the week-long promotion began, Viacom’s blog posted “Four Reasons to Go See Al Gore’s Hopeful, Compelling” film in which it called Gore a “climate change folk hero.”