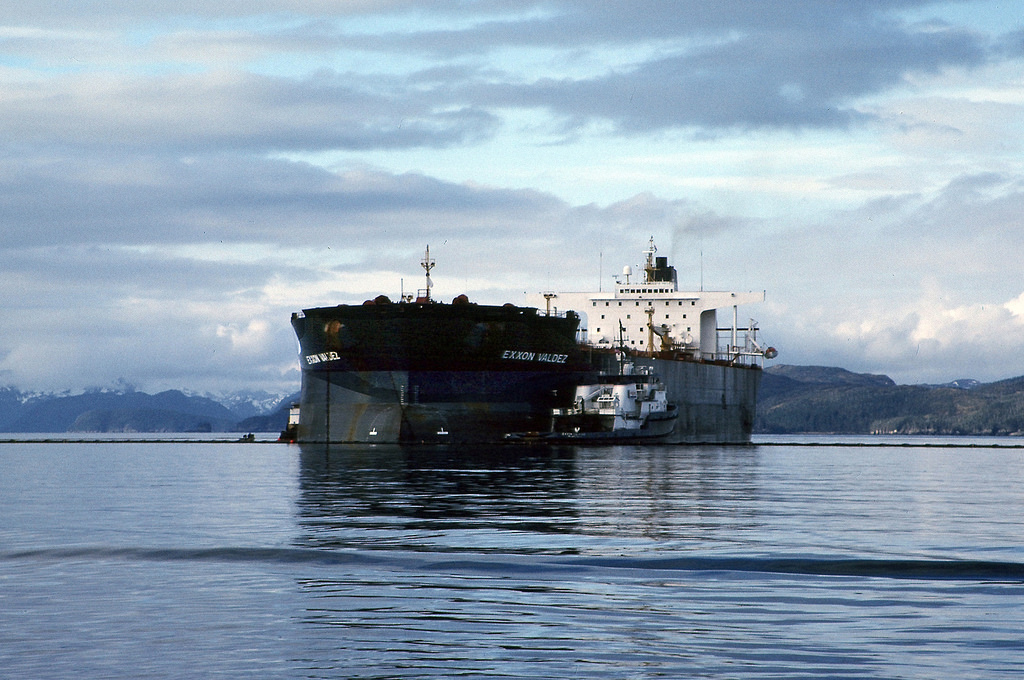 The Los Angeles Times has struck once again in a feeble attempt to sink ExxonMobil. This time, rewriting the story of a 28-year-old shipwreck.

The anti-Exxon hit piece is part of the Energy and Environmental Reporting Project at Columbia Journalism School, which also produced the 2015 #ExxonKnew campaign. Both reports were published by the L.A. Times and funded by George Soros, The Rockefeller Brothers Fund and The Rockefeller Family Fund. Steve Coll, Dean of the Columbia Journalism School, has been attacking Exxon for years and is tied to at least $1.6 million from Rockefeller foundations. He wrote a book smearing Exxon in 2013 while president of the New America Foundation.

This latest story revisited his anti-Exxon agenda. In March 1989, the oil tanker Exxon Valdez struck a reef in Alaska’s Prince William Sound. The tanker had failed to re-enter the shipping lane it had left to navigate around an iceberg from the Columbia Glacier. The wreck spilled 11 million gallons of oil, polluting more than 1,000 miles of coastline.

Numerous factors contributed to the wreck, including a potentially drunken captain who abandoned the bridge during the maneuver, leaving his third mate in charge. The Columbia writers cited “overworked crew and lax regulatory oversight” as an additional factor. The writers even clarified (near the end of their story) that navigating around an iceberg was a “maneuver carried out hundreds of times by other ships.”

Regardless, the four Columbia writers zeroed in on the “role a melting glacier played in Exxon’s biggest disaster.” The story claimed that without manmade global warming, there would have been no iceberg for the Exxon Valdez to circumnavigate.

The writers rehashed claims that Exxon knew about climate change in the ’80s but hid it -- thereby insinuating the company had knowingly and willingly damned both the oil tanker and thousands of miles of coastline.

While the writers cited multiple reports by the U.S. Geological Survey (USGS), U.S. Coast Guard and others, what’s more telling are the facts they excluded.

For example, the story cited an NBC nightly news broadcast in August 1975 where a USGS glaciologist “told viewers the glacier was likely to begin a drastic retreat resulting in ‘a massive ice pack moving out into Prince William Sound.’”

However the authors ignored USGS studies from 1977 and 1980, which both conclude the glacial shift “is apparently not related to climatic variations,” Energy in Depth discovered.

Energy in Depth also found that the Columbia researchers selectively quoted a 2000 report from retired USGS glaciologists, excluding passages that undermined their own argument.

The USGS report asserted “a combination of natural and human induced climate change” had contributed to the glacial breakup that put an iceberg in the Valdez’s path. However, omitted passages from the same report stated “the breakup of the Columbia Glacier that began in the late 1970s was likely caused more by negative mass balances...then [sic] by higher temperatures.”

The 2000 report also said “changes in the climate probably have only a minor effect on iceberg production once a drastic retreat is underway as calving rates are more controlled by water depth and ice flow rates than by meteorological factors.”

A separate report from 1987, written by two USGS glaciologists, called the relationship between climate change and glacial movement “dubious at best,” but the study was passed over by Columbia researchers. It was merely mentioned in a paragraph explaining a statement from Exxon.

“[Alan] Jeffers, the Exxon Mobil spokesman, noted that the USGS’s website on the glacier still says that climate fluctuations “perhaps” triggered the glacier’s retreat. He also pointed to a paper, published two years before the accident, in which Post and Meier questioned the significance of climate change in the movement of tidewater glaciers, suggesting its influence was ‘dubious at best.’”

The Columbia researchers also completely excluded the fact that during the 1970s, when global warming supposedly first started damaging the Columbia Glacier, Global Cooling was all the rage for climate scientists.

Anthony Watts, a meteorologist behind the Watts Up With That? blog, compiled a list of 63 articles from 1970-1979 predicting a coming “Ice Age.” At least three of those articles were from the L.A. Times itself (“Is Mankind Manufacturing a New Ice Age for Itself?” in 1970, “New Ice Age Coming -- It’s Already Getting Colder,” in 1971 and “Scientists See Chilling Signs of New Ice Age,” in 1972).

Other outlets including The New York Times, Time Magazine, The Washington Post and The Chicago Tribune also jumped on the “Ice Age” bandwagon.

Broadcast anchors were also throwing themselves headlong into the “Ice Age” alarmism in the 1970s. CBS anchor Walter Cronkite cited scientists who claimed “a new ice age is creeping over the northern hemisphere,” on September 11, 1972.

He based his claim on “experts like Reid Bryson” who believed the earth had been cooling since 1945 based on “ever cooler temperature readings in the great plains on land and the north atlantic at sea.”

Smith made similar claims again in January and February 1978, going so far as to predict that there would be “glaciers down to the Mason-Dixon line.”

But the Columbia researchers themselves excluded the 1970s “Ice Age” hysteria in their report. Instead, they want you to believe -- like they do -- that Exxon had discovered global warming and was hiding it.

In reality, the Columbia/L.A. Times report was merely the latest in an ongoing crusade against Exxon. The article, part of the Energy and Environmental Reporting Project, was funded by George Soros, the Rockefeller Brothers Fund, the Rockefeller Family Fund and others.

Marc Morano, publisher of Climate Depot and producer of the Climate Hustle movie, said in a statement, “The Los Angeles Times is really ramping up the fake news factor with this Rockefeller and Soros funded 'article' seeking to blame global warming for the the 1989 Exxon Valdez.”

The Exxon Valdez story claimed “funders have no involvement in or influence over the articles produced” by the project.

However, Rockefeller Brothers Fund director Lee Wasserman admitted in December 2016 that his foundation had deliberately attacked Exxon in the 2015 #ExxonKnew smear campaign carried out by Columbia, the L.A. Times and InsideClimate News.