Since comedian John Oliver recommended people donate to the liberal journalism site ProPublica, donations have been pouring in, according to The New York Times.

The Times also reported that nonprofit journalism in general has seen a spike in donations (especially small ones) since Donald Trump was elected the 45th president of the United States. But The Times failed to note that every outlet they mentioned in their Dec. 7 report were funded by left-wing organizations.

In fact, the nearest The Times came to revealing the nonprofits’ liberal ties was simply saying the donors and audience “tend to lean to the left.”

All The Times stated was that nonprofit executives didn’t know whether their donors were motivated by a “partisan response to the election” or a “broader concern over the viability of a troubled industry.” The report also cited that Laura Walker, President of New York Public Radio, and “others” said it was “not their role to be partisan” despite their donors’ views. 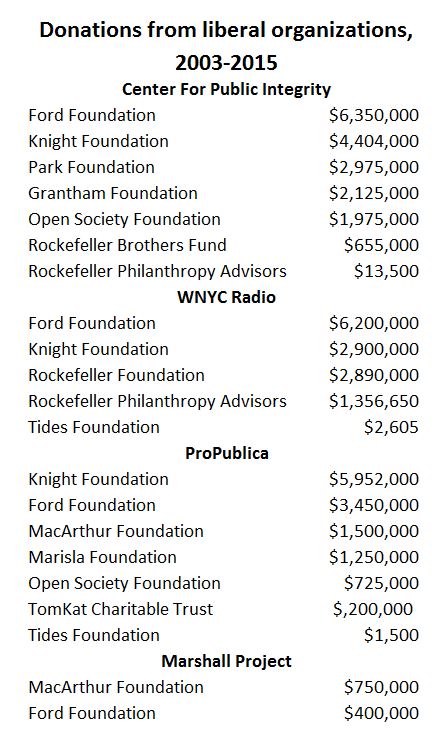 But three of the four outlets named by The Times — the Center for Public Integrity, The Marshall Project (which focuses on criminal justice), and ProPublica — are liberal. The fourth, WNYC Radio (the flagship station for New York Public Radio), has received millions from liberal organizations.

Since the election, The Times revealed, donations to these liberal nonprofits have increased significantly. Individual donations to Center for Public Integrity are “up about 70 percent compared to the same time last year,” while the Marshall Project donor pool is “up 20 percent since the election.”

ProPublica likewise hauled in $750,000 from small donors since the election, surpassing the $500,000 “raised from small-dollar donors in all of 2015,” and at one point, “ProPublica was receiving as many as four donations a minute.”

WNYC, meanwhile, brought in $3.25 million in its October fundraising campaign — “the largest in public radio history,” and since the election, donations have come “at two or three times the normal rate,” The Times reported.