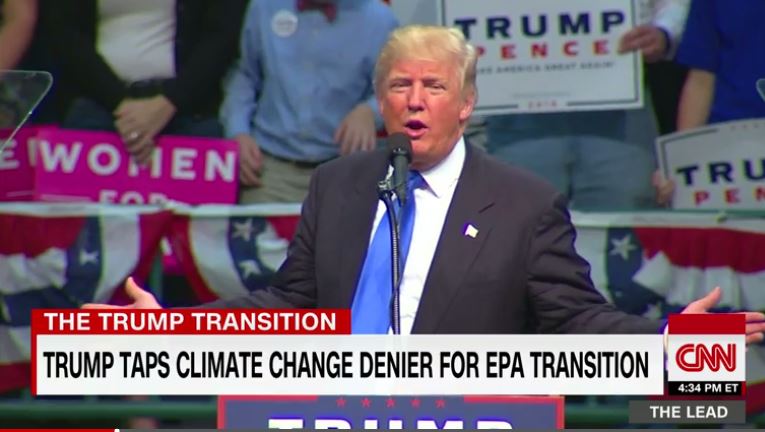 Liberals are struggling with the idea that elections have consequences. Sometimes those consequences include repealing regulations and policies of the previous administration.

For the past eight years, Obama and liberal environmentalists claimed that harsh regulations were essential to combat disastrous amounts of global warming. But now that Donald Trump is president-elect, Media groups, from left-wing nonprofits like Mother Jones and Grist, to for-profit outlets like The New York Times and Newsweek, are petrified for the environment.

These liberal nonprofit groups have also personally attacked Competitive Enterprise Institute’s Myron Ebell, Trump’s likely pick to head the EPA. Grist, Mother Jones, DeSmog Blog, and InsideClimate News have all referred to Ebell as a “denier” or a “denialist” (InsideClimate went so far as to accuse Ebell of writing a “denialist alt-science memo”). That’s despite the Associated Press StyleBook condemning that terminology because “the phrase denier has the pejorative ring of Holocaust denier.”

Carrying the “Holocaust denier” language farther, in 2006, Grist columnist David Roberts wrote that “we should have war crimes trials for these bastards — some sort of climate Nuremberg.” Former NASA scientist and climate alarmist James Hansen similarly called for oil executives to be “tried for high crimes against humanity and nature” in 2008, and in 2014 David Suzuki said climate skeptics should be “thrown in the slammer.”

The nonprofit journalist world didn’t end their attacks at the word “denial.” InsideClimate News insinuated Ebell’s climate skepticism was bought by ExxonMobil and other so-called “dark-money donors.” DeSmog claimed, “For the best part of 20 years, Ebell has been actively working in favor of the fossil fuel industry by attempting to undermine climate science.”

“Despite such evidence pointing to a warming planet, Ebell has described the consensus around global warming as ‘phony’ and ‘not based on science,’” PBS wrote on Nov. 14.

DeSmog Blog meanwhile has an extensive bio on Ebell in its “disinformation database” which supposedly lists people who have “helped to delay and distract the public and our elected leaders from taking needed action” on climate change.

For profit outlets have also joined in trying to discredit Ebell. Newsweek wrote in October that Ebell “revels” in being “sometimes described as climate denier-in-chief,” and that Trump’s EPA -- with Ebell at the helm -- will be “sharply at odds with the scientific consensus.”

CBS News referred to Ebell as a “climate change denier” in a Nov. 11 headline, and Jake Tapper also called Ebell a denier in a CNN video the same day.

Also on Nov. 11, The New York Times wrote Ebell “revels in taking on the scientific consensus on global warming,” and said “he is hardly shy about lobbing verbal grenades, sometimes directly at scientists and environmentalists.”

The supposed climate experts at Cosmo magazine meanwhile compiled “9 Infuriating Things You Need to Know About the Man Donald Trump Is Appointing to Protect the Environment” on Nov. 12. Their first grievance was that Ebell “doesn’t think climate change is real,” followed by “Myron Ebell loves to be in the spotlight,” “Myron Ebell's organization is financed in part by Exxon and the coal industry,” and “Myron Ebell had an early job in Washington helping to hurt endangered animals.”

Media opposition to the Center for Public Integrity (CEI), where Ebell currently works, are not new. In late 2015, The Washington Post went so far as to call CEI “anarchist,” but then deleted the evidence. The media also routinely exclude CEI from policy discussions, in favor of liberal commentators.