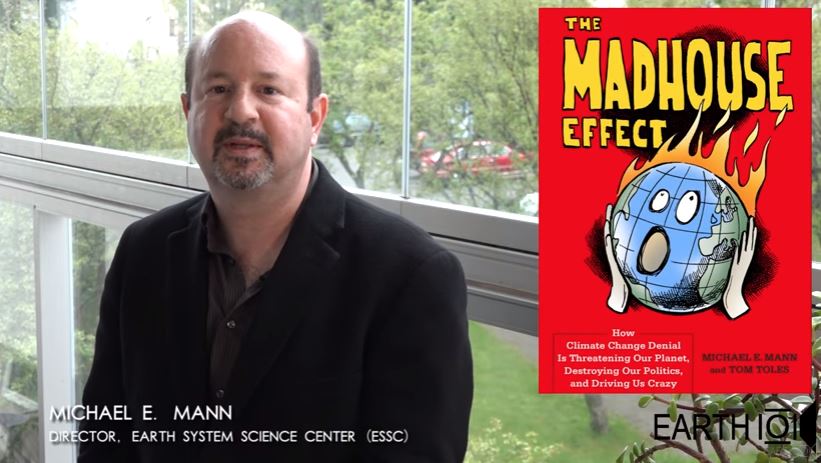 Michael Mann is not just a climate scientist, he’s a climate activist and one of the news media’s favorite alarmists.

So it is no surprise to see him lash out at anyone who disagrees with his views about the climate. But it crosses into rampant media bias when a national newspaper supplies him with the platform and the editorial cartoonist to lampoon his competition in the marketplace of ideas.

That is exactly what The Washington Post Outlook section did on Sept. 18, when it featured a full-page “Hotlist of climate-change deniers,” by Mann and Post cartoon artist Tom Toles. The smear campaign against eight individuals skeptical of climate alarmist was an excerpt adapted (and promoting!) Mann’s new book, The Madhouse Effect: How Climate Change Denial Is Threatening Our Planet, Destroying Our Politics, and Driving Us Crazy.

Mann was responsible for the infamous “hockey stick” graph of global warming and has repeatedly pushed misleading statistics to promote climate alarmism, but accused his critics of spreading “deliberate misinformation.” In the wake of the Climategate emails, Mann was mocked with the phrase “hide the decline,” referring to what critics said he did to temperature data.

Mann's Outlook piece accused all of the individuals of being part of a “campaign of deliberate misinformation” and described Rep. Joe Barton, Steve Milloy, Rupert Murdoch, Bjorn Lomborg, S. Fred Singer, Sarah Palin, the Koch brothers and Marc Morano as “some of the worst offenders.” Mann hurled attacks over “considerable largesse” from fossil fuel funding, “deniers-for-hire,” and “anti-climate science” generally without citing evidence or sources for his claims.

The attack used the terms “deny,” “denial,” “denier,” and “denialist” 10 times, to denigrate the critics he singled out. Mann failed to include any scientists whom he considers “deniers” in the list, even though there are scientists who disagree with Mann’s claims about climate change.

The list complete with mocking cartoon images for each person supplied by Toles was offensive on multiple levels, but especially because of the use of the term “deniers.” The Associated Press stylebook announced in 2015 that journalists should “avoid” the term because of “pejorative” connotation to Holocaust denialism.

The section on political scientist and economist Bjorn Lomborg took Lomborg’s words out of context.

“Lomborg represents an insidious form of climate change denial,” it stated. Then Mann and Toles quoted a 2010 Lomborg op-ed from Project Syndicate. However, they took his words out of context, making him sound cold and heartless as if he wouldn’t mind 400 million people being affected by a 20-foot rise in sea level.

“What’s 400 million people among friends?” Mann and Toles sneered. But they entirely ignored that Lomborg’s argument wasn’t finished. His op-ed also said most of those 400 million people live in cities where they could be “relatively easily” protected.

“As a result, only about 15 million people would have to be relocated. And that is over the course of a century,” Lomborg wrote.

The left loves to accuse others over the funding they get, as if fossil fuel money is automatically tainted and agenda-driven — but refuse to acknowledge liberal donations could be biased. They also refuse to admit dissent could be honest, or ... evidence.

“Most of the residents in the Potemkin village of climate change denial receive or have received Koch funding,” they fumed.

Mann also attacked Marc Morano for “bringing ‘swift boating’ to climate science” and for running the “anti-climate science website ClimateDepot.com” among other things.

Editor's note: Morano worked for our colleagues at CNSNews.com from 2001 to 2006.