Bozell & Graham Column: In Denial About the Attack In France

When America was hit on 9-11, the world united around us. France just had its 9-11, and again the civilized world has come together, all except the United States. Where were America’s leaders as the rest of the world united?

The reaction to Islamic terrorists killing 17 people in Paris in the name of their radical creed has been greeted with a very strange perceived need to deflect or just dismiss it in liberal political and media circles.

Most journalists  tried to downplay or ignore Obama’s failure to attend the huge Sunday “unity” rally in Paris, where 40 world leaders gathered in a show of support for France. While the New York tabloids mocked Obama, most national newspapers mentioned “World leaders link arms” and barely noticed the leader of the free world had stayed home to watch football games.

Even after the White House spokesman admitted it was an error for top American officials to skip the event, obviously in reaction to national and international outrage, still some newspapers buried it inside their papers like it was no big deal. 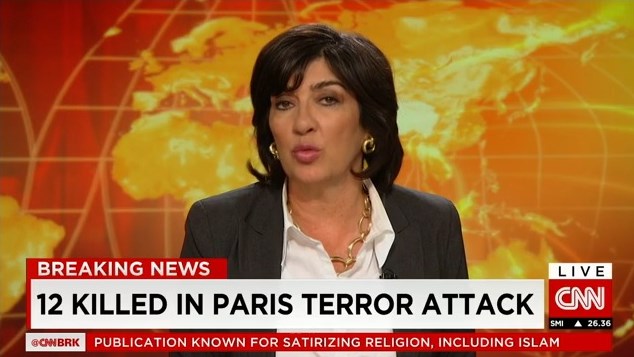 There were other distressing signs of liberal deflection. CNN International anchor Christiane Amanpour called the terrorists mere “activists” in her reporting on the shootings at the satire magazine Charlie Hebdo: “On this day, these activists found their targets, and their targets were journalists.”

Amanpour was quoting one of the dead cartoonists, who said “When activists need a pretext to justify their violence, they always find it.” Words matter, especially to journalists, and this was the wrong word. Activists write letters to the editor, join a community organization or protest, volunteer for a political campaign, man a phone bank.

Men who terrorize by slaughtering innocent men, women, and children are terrorists.

Even during an outbreak of terrorism, some leftists deflect, putting bizarre political spins on the events at hand. Some continue to insist that the terrorism du jour is caused by Bush’s war in Iraq, or any other response to 9-11, like the prisoners held at Abu Ghraib or Guantanamo.

Or it’s those Jews. It was amazing to listen to Jimmy Carter (who simply refuses to leave the world stage, even decades after the curtain fell) suggest the Jews and “the Palestinian problem” bore responsibility. BBC reporter Tim Willcox upbraided  a Jewish woman saying Jews are being targeted in France, insisting to her that “many critics though of Israel’s policy would suggest that the Palestinians suffer hugely at Jewish hands as well.” (He later apologized for a “poorly phrased question,” which it wasn’t. It was an inaccurately stated declaration.)

After the terrorist attack, liberal journalists worried about the “backlash” from the “far right” that opposes rapid immigration or the spread of aggressive Islam. On MSNBC, for example, Andrea Mitchell lectured the attacks would be “a challenge for France,” a country “where immigration and the Muslim population has been under fire.” The challenge is not to “react negatively and not to paint people with a broad brush.”

The Left passionately attempts to inflame the world against such slow-emerging, life-threatening crises as “catastrophic global warming” or fast-food menus without calorie counts. But when it comes to Islamic jihad, they seem oddly incapable of outrage or alarm. They just deflect or dismiss.