Why Did The New York Times Ignore The Biden 'Terrorist' Story?

The New York Times ignored the Politico story reporting that several sources had heard Vice President Joe Biden called the Tea Party backed lawmakers "terrorists." When the Vice President's office was contacted about the story they at first declined to comment. Then they put out at statement saying that the vice president does not believe it’s an appropriate term in political discourse. Which is not the same as denying he said it. Then, they finally came out and flatly denied it.

Book Review: 'How Hollywood Uses TV To Brainwash Our Children'

That may sound like an overblown title, but if you read Ben Shapiro's new book, "Primetime Propaganda, The True Hollywood Story Of How The Left Took Over Your  TV," you will see it isn't overblown in the least. Ben doesn't just speculate here. He goes to the source.

He interviews the movers and the shakers of Hollywood who admit their own bias and their own agenda. You may have heard Ben's interview with Glenn Beck this morning. Glenn asked him how he got access to these big wigs. Ben said it was because of his last name (Jewish) and the fact that he went to Harvard. They just assumed he was "one of them." The few that did bother to google Ben, declined to be interviewed. So, this fascinating book takes us into the minds of the people who bring television into our home. They clearly state how they want to influence our kids with their political views.

On Sundays I always watch CNN's Candy Crowley's "State of The Union", and "Fareed Zakaria's GPS." I watch Candy because she really is a fair, intelligent, and balanced journalist. She is one of the best out there along with Jake Tapper of ABC News, and Chris Wallace and Bret Baier of Fox News.

Take a peek at this picture on CNN.com as of 2:30pm eastern time (fuller picture after break): 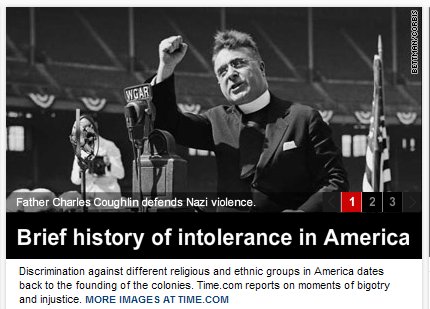 The following is a Twitter conversation I had with CNN's Roland S. Martin on Wednesday.
He was upset at Gov. Bob McDonnell (R-Va.) issuing a proclamation declaring it Confederate History Month in the commonwealth without mentioning slavery.
He had retweeted Donna Brazile's tweet that she was outraged that the RNC hadn’t condemned McDonnell. Her Tweet said:  "RNC Chair should have condemned this statement,along with every GOP leader. But the double standards are so apparent with the media & blogs"
And he doesn't like NewsBusters very much (discussion follows with my tweets in Italics):

Once again, the left smears without a shred of proof, it is taken at face value, and the media reports it from then on as truth.

As you may recall, a staffer for Rep. James Clyburn (D-S.C.) told reporters that Clyburn and Rep. John Lewis (D-Ga) had been called the "N" word several times by Tea Party protestors before the health care bill vote, although video of the event shows no such thing happened.

The Hill publishes this today where Rep. Lewis says that we lack a moral leader in America: 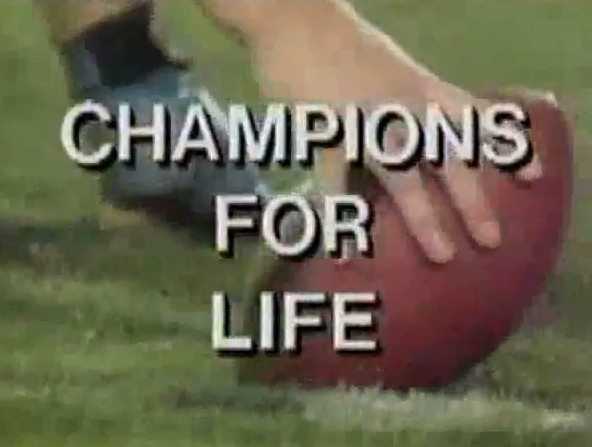 There has been a lot of controversy over the Super Bowl ad featuring Tim Tebow and his mother discussing how she chose life for her son.

The ad is a simple sincere look at a personal story. Yet the left and the "feminists" have gone nuts over it.

23 years ago, The American Life League, one of the largest Catholic Pro-Life organizations, produced a short featuring members of the Super Bowl winning New York Giants.

As you watch former superstars Phil Simms -- the game's MVP and current sportscaster for CBS! -- Mark Bavaro, Jim Burt, Chris Godfrey, George Martin, and Phil McConkey speak out against abortion, try to imagine what the reaction would be to this film if it was made today.

The roar from the left would be heard from outerspace (video embedded below the fold):

Were There 'Tribal Aspects' To The Anti War Protests?

By Kathleen McKinley | November 19, 2009 5:43 PM EST
As Noel Sheppard pointed out in an earlier post at Newsbusters, Chris Matthews once again accuses the Tea Party goers of being too white:

"This is a largely white -- almost no minorities in this crowd," reported MSNBC's O'Donnell live from the scene.

Matthews reiterated, "Well, they look like a white crowd to me," later claiming, "I think there is a tribal aspect to this thing, in other words, white vs. other people."

Here are pics from the left's Code Pink's latest march on Washington D.C. I don't see ONE face of color. Go ahead and look through their photo stream back into the Bush years and the protests then. Still a sea of white faces. Here are a few anti war protest pics from that time when I pointed this out back in April.

Let's compare. Here are anti-war protests (I warn you, they may be overtly white, but they are also overtly weird). Here are the Tea Party Protests.

What Have We Come To When The President Slurs Those Who Disagree?

The left has gotten a lot of "giggles" over the term "teabaggers" in describing Americans who attend the tea parties. For those of you who don't know, teabagging is a perverse sexual term. It is interesting to me that the left not only knew the term, but seemed very comfortable using it. I guess I shouldn't have been surprised.

Those having the most fun have been CNN's Anderson Cooper, Rachel Maddow of MSNBC and frequent guest pundit Ana Marie Cox. Last week I posted about tweeting with Ana marie Cox where she promised me she would stop using the term if I donated to a charity she was sponsoring for research in colon cancer in memory of Tony Snow. I donated $100 and was her top contributor. She thanked me and promised she would stop. She even asked if "teabaggist" would be cheating, and I said yes it would be.

That's right. In a four page report from ABC News titled, "Tens of Thousands Celebrate 20th Anniversary of Berlin Wall's Collapse," Ronald Reagan is not even mentioned. Not once. And from what I have read, Secretary of State Hillary Clinton didn't mention President Reagan, and neither did President Obama in his taped message. I hope I end up being wrong about that, but I kind of doubt that I am.

Can one even imagine CNN fact checking any of the skits SNL on President Bush or Sarah Palin?? Heaven forbid SNL finally make fun of President Obama. CNN couldn't help themselves. They actually fact checked the jokes.

[Update, NBStaff, 10:35 am Eastern: Transcript of CNN segment added below.]

The transcript of CNN’s “fact-checking” report, which aired 28 minutes into the 6 pm Eastern hour of Monday's Situation Room:

WOLF BLITZER: It seems no politician is safe from Saturday Night Live. While many people think SNL has mostly spared President Obama, what they’re doing now is not necessarily all that kind. They essentially cast the leader of the free world as a do-nothing president, at least so far. Even though SNL deals in comedy, what they said about the President rings true for a lot of you, apparently. So, did the show accurately capture a mood, or did it go off track for comedic effect?

Frank Rich of the NYT has a piece titled "The Bigot's Last Hurrah" where he names all the usual conservative suspects who are against gay marriage.

A Challenge for Sen. Arlen Specter

On Thursday I interviewed Sen. John Cornyn, head of the National Republican Sentorial Committee. When I asked him about the NRSC running someone against Sen. Arlen Specter in 2010, given the anger many Republicans feel about Specter's vote on the stimulus bill, Cornyn's answer was basically that he would rather have someone voting with him 80% of the time, rather than a liberal Democrat who would vote with him 0% of the time.

Well, it looks like Sen. Cornyn might be able to get someone who will vote with him more than 80% of the time. Former Congressman Pat Toomey, the current Club for Growth President, announced this morning on Bobby Gunther Walsh's 1-On-1 Show, WAEB, 790AM, that a Primary challenge to Sen. Arlen Specter is now 'back on the table."

Given Specter's abysmal poll numbers in Pennsylvania right now, this is interesting, to say the least.

On Sunday the Associated Press reported these words from Vice President Biden:

A Workout For The Media

Just looking at the hypocrisy of the media. So what else is new? But sometimes you just have to point out the obvious.

Christmas day the Washington Post slobbered (metaphorically speaking) all over it's front page about Obama's workout:

"The sun glinted off chiseled pectorals sculpted during four weightlifting sessions each week, and a body toned by regular treadmill runs and basketball games."

Republicans Are Not Supposed To Use Satire?

Why is is controversial to make fun of a liberal black columnist calling Obama "The Magic Negro?" It absolutely begs to be made fun of.

Media sources seemed to be thrilled that Obama is promising to save or create millions of new jobs. The only problem is they seem to purposefully fail to mention that these will primarily be government jobs. From Libertarian Republican:

Who Is Using Race as an Issue?

Peter Beinart at the Washington Post is afraid this Presidential campaign is going to be about race. He is warning Obama that it shouldn't be. It has been brought up though. But by whom? Here is what Beinart had to say:

That's the lesson of recent weeks, when the McCain campaign brought up race (on the pretext that Obama had brought it up first). The Obama campaign tried desperately to change the subject but couldn't. Once the chum was in the water, the media sharks went wild.

On the pretext that Obama brought it up first? Excuse me? Obama did bring it up first. Obama was the one who threw "the chum" in the water.

At a fundraiser in June here is what Obama said:

The Truth In Sadr City

The AP article as headlined in the Houston Chronicle:

"Militiamen ambush drives back US patrol in Sadr City"

"The U.S. Military said 28 militamen were killed as the U.S. patrol pulled back."

Bill Roggio at The Long War Journal gives us the important details. The title of his article?

Conservatives Have A 'Hate Based' Campaign Against Obama?

Paul Waldman at The American Prospect blames conservatives for all of Obama's race problems.

"For months, I've been predicting that conservatives would delicately prompt voters to see Barack Obama through the lens of race. They'd drop hints, they'd make roundabout arguments, they'd find a hundred subtle ways to encourage people to vote their prejudices, while denying vociferously that they were doing anything of the sort."

A Positive Image for Women?

Well, look no further than John McCain's daughter, Meghan. Meghan runs a delightful blog about her campaigning experiences called McCainBlogette. I have enjoyed her excellent pictures, video, and writings throughout the primaries.

Meghan is a beautiful woman, so imagine my surprise when I read her most recent post where she discusses people who criticize her weight and body shape!: