Behar: McCain to Appoint Justices that 'Roll Back Civil Rights'

John McCain’s anti-woman philosophy will guide him to appoint Supreme Court justices that will roll back civil rights, according to Joy Behar. Discussing the 2008 election on the May 8 edition of "The View," political pundit, Catholic theologian, and constitutional scholar Joy Behar offered her theory on why white women will vote for Obama, assuming he is the nominee, and even called Roe v. Wade "civil rights legislation."

"When these women, these white women that love Hillary so much, you know, there’s a lot of white, he gets the women vote. When they realize that McCain is going to load the Supreme Court up with more conservative justices who are going to probably roll back or try to roll back Roe v. Wade, civil rights legislation, you are going to see those white women go to the polls and vote for Obama."

Elisabeth Hasselbeck noted the absurdity of Behar’s point calling it "such a broad statement" and "an extreme prediction." Joy Behar proceeded to call McCain ideologically "off the wall" and repeated her recounting of labeling McCain "anti-woman" because he’ll allegedly appoint justices that will overturn Roe v. Wade. 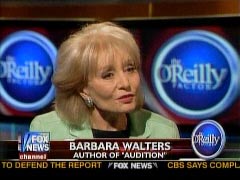 "I am not responsible" says Barbara Walters on Rosie O’Donnell’s extremist remarks on "The View." Appearing on the May 7 "O’Reilly Factor," host Bill O’Reilly brought up Rosie’s most controversial remarks, notably comparing "radical Christianity" to radical Islam and her famous 9-11 conspiracy theories

Absent from "The View" on May 6, Barbara Walters opted for "Oprah" to promote her new book "Audition." Inevitably the conversation included the tumultuous Rosie O’Donnell 2006-07 season. Barbara very carefully critiqued Rosie seeking to balance her criticisms with a compliments.

In describing Rosie’s sometimes obvious dominance, Barbara claimed Rosie "from day one took over the show" comparing Rosie to Diana Ross and the other co-hosts to the Supremes. Barbara also added Rosie "made some wonderful changes, but it was also very, very difficult."

Of course the famous on air fight between Rosie and Elisabeth Hasselbeck surfaced. The fight stemmed from those accusing Rosie of calling troops terrorists and Elisabeth refusing to defend Rosie. Barbara and Oprah agreed "she never said that." Although Rosie did not explicitly say "the troops are terrorists," her question "who are the terrorists?" certainly suggested it.

The conversation did not involve Rosie raising the possibility that 9-11 was in inside job and "fire can’t melt steel."

The transcript minus some discussion of Rosie O’Donnell’s feud with Donald Trump is below (video available here courtesy our friend Ms Underestimated): 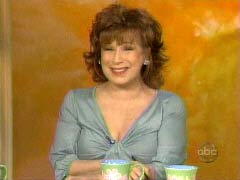 Joy Behar claims Bill O’Reilly’s concerns over the enormous financial cost of Hillary Clinton’s universal healthcare plan is "untrue" and "he just keeps saying it over and over as if it’s true," implying that O’Reilly is lying.

Jeremiah Wright is on the Republican "payroll" according to View co-host Joy Behar. Discussing the Reverend Wright controversy, Behar offered her conspiracy theory of a Republican dirty trick: "I think Reverend Wright might be being paid by the Republicans. That's what I think." She emphasized: "He's on the payroll!" This is not the first time Behar has hypothesized on the evil genius of the right. The daytime diva accused Republicans of causing Democratic Senator Tim Johnson's stroke and wondered if the "right-wing" planted the bogus McCain/Iseman story. [audio excerpt available here]

Whoopi then chastised Hasselbeck and those who criticize Obama for his Wright connection: "To sabotage the first black president is outrageous." Behar expressed no such concern over her own smear of African-American Supreme Court Justice Clarence Thomas.

In challenging Newt Gingrich’s assertion that there’s a sympathy on the far left for America haters such as William Ayers, Behar inquired, "there’s no romance going on between the hard right of this country and Saudi Arabia let’s say?" Gingrich swiftly answered "the hard right in this country deeply dislikes Saudi Arabia as the source of Wahabbist funding." 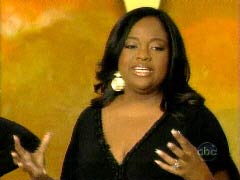 Are Reverend Jeremiah Wright’s comments shouting "God damn America" comparable to Rosa Parks famous refusal to give up her seat? According to "The View’s" Sherri Shepherd it is. Discussing Wright on the April 28 edition, Shepherd, with Joy Behar’s backing, called Wright’s anger "righteous" and compared it to Rosa Parks’ famous protest.

Presumptive Republican nominee Senator John McCain appeared on April 25's "Today" to face a barrage of left-leaning questions from co-host Meredith Vieira. Vieira began by playing two Democratic National Committee attack ad, and reading a press release verbatim, and asking "what do you say to that?" 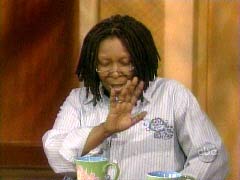 Voting for someone based on qualifications or ideology rather than race is very "white" according to "View" co-host Whoopi Goldberg. Also, according to Joy Behar, only white males like tax cuts.

Is this the network all of the Democrats were afraid of just months ago? Glowing from her victory in Pennsylvania, Senator Hillary Clinton braved the April 23 edition of FNC’s "Fox and Friends" to face a barrage of...softball questions. This is not new for the Fox News morning show as they've already given Senator Clinton two other easy interviews.

Co-host Gretchen Carlson started the segment asking "May I call you ‘Rocky’ this morning, Senator?" Carlson and fellow co-host Steve Doocy allowed Clinton to answer any way she pleases and did not interrupt the New York senator. At one point, it appeared as if Doocy was setting up a tough question, recounting some of the many Clinton scandals, but gave Clinton a tee-ball, opining "I thought Barack Obama wasn’t going to run that kind of a campaign." [audio available here]

Whoopi and Joy Rooting for McCain? 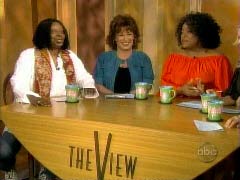 Whoopi and Joy admit, a part of them wants McCain to win. Why? They want a Republican to clean up after a "Republican mess." Whoopi added that if Hillary or Obama wins "they" (without saying who "they" are, Republicans? The media?) will mercilessly pursue scandal allegations the way "they" allegedly did to former President Bill Clinton. 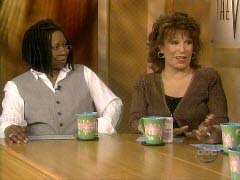 Is sexism strictly an American phenomenon? That’s what Whoopi Goldberg asked to former Clinton press secretary Dee Dee Myers. Appearing on the April 22 edition of "The View" to promote her book "Why Women Should Rule the World," Whoopi, noting that there has never been a female president, framed her question in this fashion. 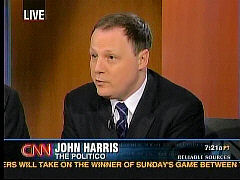 The Politico, in an April 18 headline, stated the obvious "Obama’s secret weapon: The media," though it’s not much of a "secret" weapon. John F. Harris and Jim Vandehei noted the backlash against ABC for daring to ask the tough questions, and many mainstream journalists rallying behind Obama after the debate.

Despite the liberal media’s outrage over ABC’s handling of the Democratic debate, ABC’s "The View" had no criticism. On the April 17 edition, Barbara Walters actually praised Gibson and Stephanopoulos for the tough questions. She also noted the candidates made "some very important points...that we have not heard before." Even reliably left wing partisan Joy Behar, also an ABC employee, had no criticisms. 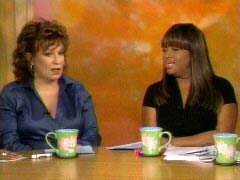 Tag is a violent game that should not be allowed says "View" co-host Joy Behar. Discussing the game’s suspension at an elementary school in McLean, Virginia on the April 16 edition, Elisabeth Hasselbeck felt kids needed an outlet, like playing, to get out their aggression.

Whoopi Goldberg Rails Against Her Taxes

To mark Tax Day, Whoopi Goldberg, a strong critic of high taxes, railed against how much the government takes from her paycheck. On the April 15 edition of "The View," Whoopi displayed some of her bills with the many government fees attached to it. She also felt she was being punished for her success even calling it "un-American" and wondering why she never gets a "break."

Co-host Elisabeth Hasselbeck asked Whoopi, who admitted to voting for Hillary Clinton, if she would vote for someone who by their own admission, would raise taxes on the wealthy. Whoopi did not directly answer the question only stating "we’re getting screwed either way."

Joy Behar jumped in to hype Denmark’s socialist system. She noted Denmark’s high taxes but seemed to forget she did when she noted healthcare and education are "free." Behar then went off on a tangent when Elisabeth Hasselbeck said "so everybody move to Denmark and see if you like it." Behar screamed "don’t give me that argument. I heard that in the 60's and the 70's if you don’t like it here get your ass out. I don’t appreciate that."

NBC News has grown so pro-Obama that their coverage of the 2008 election has become rabidly anti-Clinton. Matt Lauer began his interview with Chris Matthews by highlighting Bill Clinton’s revival of the Hillary Clinton sniper controversy and the former president’s inaccurate defense of his wife’s inaccurate statement. Matthews even brought up Clinton’s notorious line "it depends on what your definition of ‘is’ is."

Rosie O'Donnell Admits to Dropping Out of College with Low Grades

Rosie O’Donnell, who once said it is "physically impossible" for fire to melt steel, shockingly revealed she did not make it through college. Promoting her new book "Crafty U" on the April 8 edition of "Martha," Rosie admitted she was not able to get through a real university. Rosie also recounted bitter memories from "The View."

Fawning over Martha Stewart’s intellect, Rosie implied she does not match up as she confessed to dropping out of Boston University with a 1.62 grade point average. She claimed she was too busy working at the local comedy club to focus on her classes. [Audio available here.]

Later in the same segment, Rosie discussed her experience on "The View" noting "it’s hard for me when I’m not the boss." This is stating the obvious for the viewers that witness her bully another co-host and nearly mistakenly referred to "The View" as "The Rosie O’Donnell Show." Rosie added "there was a little Republican who scared me," referring to Elisabeth Hasselbeck who stood up to Rosie in the end.